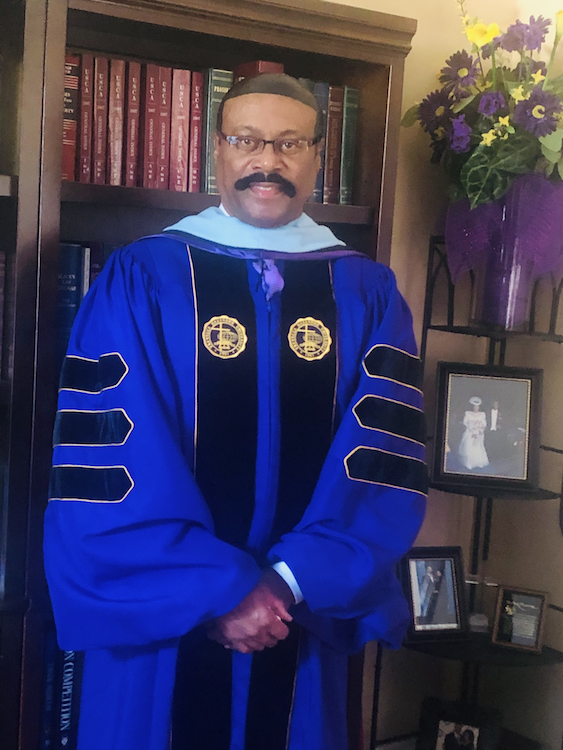 Since being hired by the University of Tennessee at Chattanooga in 1984, Richard Brown has been known as a builder.

After more than 37 years of service to the University of Tennessee at Chattanooga and the University of Tennessee System, Brown—UTC executive vice chancellor for administration and finance—soon will be building a more vital bridge within the UT System. Effective Jan. 1, 2021, he will begin a new, dual role as a special advisor to both UTC Chancellor Steven Angle and UT System President Randy Boyd.

“Richard has been instrumental to the success of UTC. His impact has been both broad and deep,” Angle said. “In addition, he has been a trusted advisor and partner. I know many other leaders across our campus feel the same way.

“When Dr. Brown informed me that he had made this decision, I encouraged him to stay full-time with UTC. I am grateful he will continue to assist UTC with his vast institutional knowledge.”

As part of his new role as a special advisor, Brown will work closely with the UT President on selective and strategic special projects within the statewide UT System.

“I’ve been contemplating my next chapter for a while, and this role as special advisor to Chancellor Angle and President Boyd aligns with my mission,” Brown said. “I will continue working on the UTC master plan while working directly with leadership across the entire UT System.

“I have been blessed beyond measure to have been able to serve UTC for over 37 years. I am looking forward to future contributions with my Chattanooga campus and the many campuses and institutes that make up the University of Tennessee System. Collaborative work with Randy Boyd, who is a dynamic and forward-thinking president, will add to my experiences and offer expanded opportunities for engagement and professional growth.”

Brown has been a UTC cornerstone since being hired by Chancellor Fred Obear—the first of five chancellors for whom he has been part of the leadership team.

“One of the ways leadership impacts the growth and development of any organization or institution is by making personnel decisions that bring strong, fair-minded, collaborative and competent individuals on board who also have well-developed interpersonal skills and the capacity to work effectively with diverse groups,” Obear said. “Dr. Brown has been that caliber of an impactful leader for UTC.”

Brown had ascended to the position of vice chancellor of administration when Bill Stacy, UTC chancellor from 1997-2004, added financial responsibilities to his job description.

Shortly after Stacy arrived in Chattanooga, Brown found himself working with the new chancellor to expand the campus. Back then, UTC was primarily a commuter school; the University had only a couple of dormitories.

Brown remembers the literal “ah-ha” moment that created the blueprint for the University’s expansion.

“Dr. Stacy and I looked across McCallie Avenue, a four-lane road with an average vehicular speed of over 70 miles an hour. And on the opposite side of it was this dilapidated kind of neighborhood that was continuing to decline,” said Brown, who received bachelor’s and master’s degrees from UTC. “I recall us walking out of the office, he and I standing there on McCallie Avenue looking off toward East 8th Street, and we said to each other, ‘You know, we can improve this. We are going to build student housing there.’”

As a result of crossing McCallie, UTC South Campus housing came into existence, fostering the growth and trajectory of the University, Brown said.

“It also impacted and changed the economic viability and prosperity of the M.L. King corridor and neighborhood,” he said. “Great cities must have great universities with visionary leaders working in partnership with their private foundations, local governments and neighborhoods to create innovative change.”

When he learned of his protegee’s impending move to a new role, Stacy wrote: “Congratulations to Dr. Brown on the UT System’s recognition of your successful decades of service to both UTC and UT. In your new endeavor, I hope this dual relationship will continue with your lending a hand back in Chattanooga when your special talents are needed. You were a positive force during my chancellorship at UTC, helping to expand the fiscal, built environment and the community engagement the University truly needed to define an ‘engaged metropolitan university.’”

Brown has guided the University’s financial stewardship for more than 20 years, balancing the institutional budget with no significant audit issues. In helping build out two master plans, he has directed the investment of more than $600 million of capital projects on campus—including a new $50-million library, more than $200 million of new student housing developments and more than $450 million of new and renovated facilities. He helped envision the creation of Chamberlain Plaza, which provided a new strategic heart of the campus.

Other highlights of his time at UTC include the creation of UPRAC (University Planning and Resources Advisory Council), ensuring every university division is engaged and involved in the budget and resource allocation process. He was selected by the Tennessee Higher Education Commission (THEC) to help design and implement the formula-based funding model for Tennessee higher education institutions.

“During my tenure as chancellor, Dr. Brown’s contributions to the University and me were endless and were critical to the success of our administration,” said Roger Brown, UTC chancellor from 2005 to 2012. “He was indispensable to the development of the annual budget and our five-year Strategic Plan. Dr. Brown had a unique ability to supervise and encourage a large portion of the University’s employees with fairness and understanding.”

Brown holds multiple degrees—including a pair of doctoral degrees and an MBA—and is a graduate of the prestigious Harvard Business School Advanced Management Program.

“I’ve always been a lifelong learner,” Brown said. “I grew up as a small child in a single-family household, pretty much raised by my mother. I was a first-generation college student in a first-generation college family. I was the first in my family to graduate college. I learned early on, growing up as a young man in East Chattanooga, that education was the key to transform your life.”

During his time at UTC, Brown has served as a mentor to many students, faculty and staff members. He also has been recognized for his community engagement efforts on behalf of UTC, earning the statewide Harold Love Outstanding Community Service Award and the NAACP’s James R. Mapp Citizen of the Year honors.

“When I received the Love Award, I was asked, ‘What does that mean to you?’ I said, ‘Well, I’ll tell you what it means. Chattanooga and this University and the state of Tennessee have been special to me. They’ve helped me transform my life. All I’ve tried to do is give something back to help others transform their lives,’” Brown said.

“My fundamental belief is that you’re only blessed to be a blessing to others. I say that to people all the time. That is indeed the legacy that I hope that I leave after my tenure of service here—that I’ve tried to reach back and help someone else.”

To assure smooth continuity of the University’s budget and finance functions, Tyler Forrest will assume the duties of the vice chancellor for administration and finance, effective Jan. 1, 2021. A formal announcement will be forthcoming.