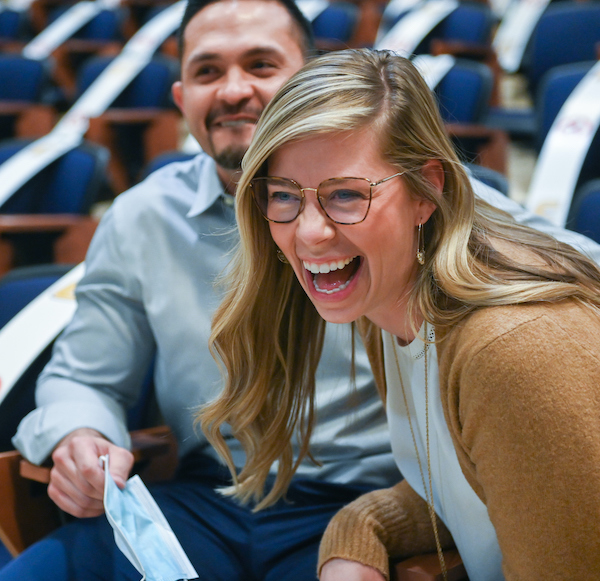 UTC alum Katie McGee reacts after her boyfriend, fellow UTC alum Christopher Muegge, surprises her with a marriage proposal in the Grote Hall classroom where they met.

It all started with a purple pen.

Katelyn McGee and Christopher Muegge were in the same physics class at the University of Tennessee at Chattanooga. They didn’t know each other, but he was in a crisis—his pencil had broken, and he had no way to take notes. She was a couple of seats away on the same row, so he asked if she had anything he could borrow.

That plum-colored introduction led to friendship, then to dates, then to a relationship. They both graduated from UTC in 2015 with degrees in biology and moved to Memphis to enroll at Southern College of Optometry, where they graduated in 2020 and started careers in optometry.

On Tuesday, Jan. 26, all of it led to a marriage proposal in the same UTC classroom where they met 10 years ago. Getting down on one knee, he called her his “best friend” and said he wanted to spend the rest of his life with her. She had no idea it was coming.

“Baaaabe,” she said softly through a wide smile, her voice a mixture of surprise, joy and love.

He was so nervous, though, he put the engagement ring on her right hand instead of left.

They now live in Cleveland, Tenn. She works at Toomey & Baggett Eyecare in Athens, Tenn.; he works at Oakmont Eyecare in Cleveland. To get her to come to Chattanooga on Tuesday, he told her the UTC Office of Alumni Affairs wanted to interview graduates who’ve been successful.

“She was like, ‘Yeah, sure, I’ll come down there and answer some questions and take some pictures,’” he said.

Throughout their academic career, both at UTC and Southern Optometry, they have been each other’s support system, they said. She’s great at organization; he has a terrific memory.

“He can remember things so well, like one little, tiny detail from class. I’m like, ‘I don’t even remember us talking about that,’” she said.

But he can’t remember if he gave the purple pen back.