Jones is one of the best cornerbacks he’s ever seen, Mocs coach says 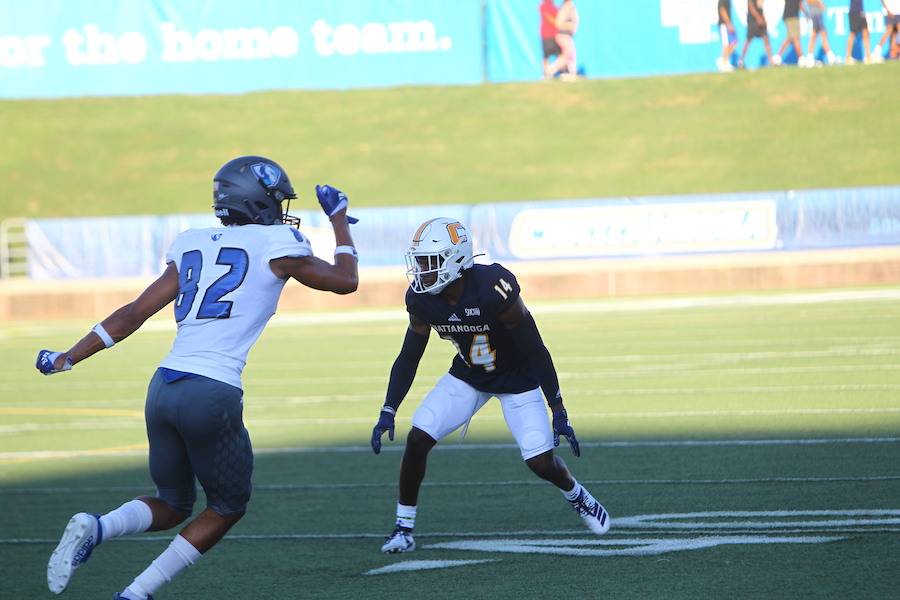 UTC cornerback Jordan Jones—No. 14—says he’s determined to do whatever he must to be noticed by NFL teams. 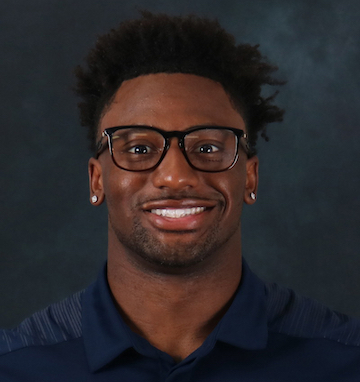 So when Ward, defensive coordinator for the University of Tennessee at Chattanooga football Mocs, talks about Jordan Jones, you sit back and listen.

“Pound-for-pound—and I’ve told him this—Jordan Jones is probably the best cornerback I’ve coached,” said Ward, whose nearly 30-year coaching dossier includes time on the NFL Oakland Raiders’ staff and a stint as the interim head coach at the University of Louisville.

Listed at 5-foot-10 and 190 pounds—considered small for a cornerback—Jordan says he knew he’d have to prove himself on the field.

My mindset has always been to work harder than the next person,” Jones said. “Coming in as a walk-on, you don’t get the same time or the same reps as everybody else. It’s just common knowledge that you’re not going to get the same time as the scholarship guys.

When the UTC football team takes the field Saturday (noon kickoff against Wofford University at Finley Stadium) to start its COVID-19 delayed spring Southern Conference campaign, Jones—listed at 5-foot-10, 190 pounds—returns as one of the leaders of the Mocs defensive secondary. Jones has appeared in 35 career games for UTC and was recently selected to the preseason All-SoCon second team.

“Jordan is a highly motivated and very conscientious kid,” Ward said. “He has probably been told his entire life that size has been a factor, and people have looked him over for that reason. And he takes it personally—not to the point that he’s mad or that he becomes a different person than he is—but he takes it as motivation.”

And to think, Jones literally had to ask for a scholarship.

A graduate of Smyrna (Tennessee) High School, Jones walked on with the UTC program in 2016, the last season of former head coach Russ Huesman’s tenure. He played in all 13 games as a true freshman.

After a coaching staff change, Jones could only watch from the sidelines while redshirting in 2017. The following season, the second of head coach Tom Arth’s two-year stint, Jones appeared in eight games, including three starts.

“When I was able to play in 2018, guys like Kareem Orr—now a cornerback on the NFL’s Tennessee Titans—and (cornerback) C.J. Fritz really pushed me and encouraged me. They allowed me to see that I can do this.”

By spring camp 2019, Jones was going through his third coaching regime at UTC. Third time proved the charm as he won over new head coach Rusty Wright’s staff.

“Coming into the spring of 2019, my confidence was there, and I went about it knowing that I still have to outwork the next man. And I did. I knew that it was my time, but I never became complacent,” Jones said.

While earning a starting cornerback job, he had the confidence to talk to Ward about his scholarship status—or lack thereof.

“We had a conversation in my office one day and he told me that,” Ward recalled. “I told him, ‘You deserve a scholarship. Let me work on it. If it goes right, we’ll get it going because you deserve one.’ It worked out for him when he won the starting corner job.

“It doesn’t happen often in college football to win a starting spot and still be a walk-on. It was definitely a reward for all the hard work he had put into being the type of leader he was. It was a blessing for him and his family and a blessing for us.”

A first-generation college graduate, Jones said it was the “call of a lifetime” to tell his parents, Dennis and Jackie, that he was the recipient of a football scholarship.

“My parents were wondering, ‘Well, you’ve been playing a little bit more. You think they’re going to give you an opportunity to go on scholarship?’ And I was telling them, ‘Just stay the course. I promise it will work out,’” he said. “But it’s hard when it’s your parents’ money.”

Jones immediately rewarded the coaching staff for showing faith in him, recording a conference-best 12 passes defended during the fall 2019 campaign. Passes defended is a defensive measure in which the defender must get his hands on the ball to disrupt the pass.

His career plan was to finish his UTC football career during fall 2020 semester, graduate in December and do whatever he needed to do training-wise to catch the eyes of NFL teams. COVID-19 put a wrench into those plans.

“It was kind of hard for me at first when COVID hit, and I had to reevaluate,” said Jones, who received his bachelor’s degree in business management. “I talked to people that are close to me and I realized that, ‘OK, this is the new norm.’ So I prepared myself for a whole other season in college and for classes as well.”

Jones is currently taking a pair of post-baccalaureate psychology classes while studying for his GRE. He envisions his future working in real estate investment.

“That’s kind of my dream and that’s what I’m very interested in pursuing,” he said. “I look at this as a blessing because I didn’t plan on doing my master’s. It’s a blessing to at least have one semester to work on it. This can turn out for the best as well, too. It gives me more time to perfect my craft as a football player as well as grow as a man. It’s all turned out for the best.”