by UTC Communications and Marketing February 25, 2021 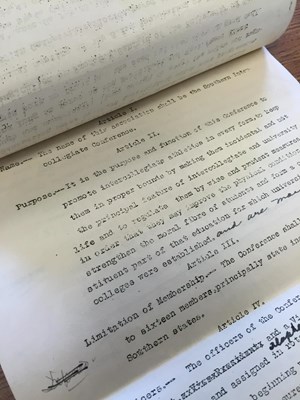 The conference currently consists of 10 members in six states.

“One hundred years. That’s a long time since the Southern Conference was founded,” said Jim Schaus, the ninth commissioner in the league’s illustrious history. “It has been a century of excellence. As we officially celebrate our Founders’ Day on Feb. 25, 1921, we reflect on the incredible teams, student-athlete accomplishments, academic achievements and historic moments that have made the Southern Conference one of the nation’s finest conferences. We look forward to what is in store for our second century.”

The nation’s fifth-oldest NCAA Division I athletic association, the SoCon has been a pioneer. In addition to contesting the first-ever collegiate conference basketball tournament in 1921, the league tackled freshman eligibility in 1922, became the first conference to adopt the 3-point field goal in basketball in 1980 and developed women’s championships in 1984.

The conference currently consists of 10 members in six states throughout the Southeast and sponsors 22 varsity sports and championships that produce participants for NCAA Division I Championships. The league prides itself on the diversity of its institutions, as four are private and six are state schools, two of which are military colleges.

SoCon teams have won eight Football Championship Subdivision titles, second-most in NCAA history. Furman men’s basketball player Frank Selvy scored 100 points in a game in 1954, a mark that still stands as the Division I record for single-game points. In 1990, The Citadel became the first military school to reach the College World Series.