Class philosophy: ‘Take risks and not just live by the rules’ 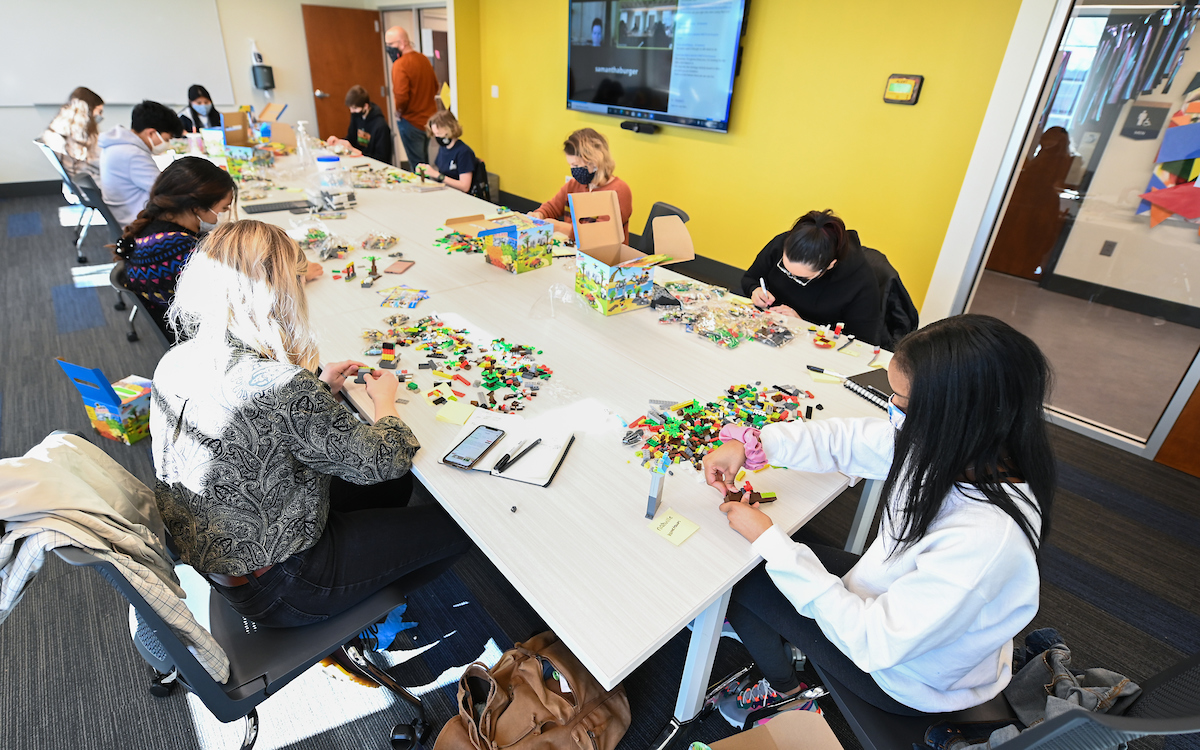 Delali Gadzekpo’s assignment was to illustrate her family’s history, tracing it back to its roots Ghana, Africa. She couldn’t use words to describe it, though.

She had to use rocks.

The kind you find outside.

Her last name means “iron sharpens wood,” she explained, so she took that and applied it to her grandfather in Africa, who always has been an icon in her family. Her father described him as “super-rich and super-strong,” she said.

“ I tried to incorporate who he was a person but also ‘iron sharpens wood’ to talk about his strength and his character.”

And using rocks to do that?

“Yeah, trying to put those into rocks was difficult, but it was fun. It helped me change my mindset of education as a whole.”

Which is precisely the point in his Cultivating Creativity class, said Owen Foster, director and professor of practice of innovation in the Honors College at the University of Tennessee at Chattanooga. He gives students assignments that include drawing, building with Lego-like blocks, draping multi-colored streamers, finding letters and numbers out in nature and, yes, rocks.

“I want them to be OK with being comfortable with themselves, that they can make decisions on their own without having someone else to tell them exactly what to do,” he said. “Some of them just lock up and that’s when I tell them, ‘You know, life is going to be this way.’ So, for the most part, the lessons at the end of it are more about how you approach life because creativity is just a thought process.”

In a recent class, Foster told students to pair up and, using the Lego-like blocks and sketch pads, take their family histories and combine them, examine their similarities and differences and how those may affect culture as a whole in 100 years. Student Jannat Saeed blurts out “What?” in an incredulous voice.

“You can’t sit here and go, ‘OK, I’m going to write this out, and you write yours out, and then we’re going to come together,’” he said. “That’s not the way two families come together. There’s going to be a lot of communication.”

“You call your grandma ‘Oma? So do I’,” Greenwell exclaims.

“Oma” is German for “grandmother.”

Immediately, the pair came up with an idea for their project, a timeline that traces each of their families’ histories from Germany to the United States, using the building blocks to create versions of their family members. Suerth, for instance, builds a figure representing her grandfather with blocks of black, red and yellow, the colors of the German flag.

Wendy Reynoso is a junior in mechanical engineering, a major that, at first glance, doesn’t seem to mesh well with the ways and means of Cultivating Creativity. But it does, she said.

“It helps me in my career to be more open, to be creative. In my field we do a lot of presenting and research and, after a while, everybody’s research looks about the same in the way we structure it. But taking this class helps me expand my creativity so, if I’m presenting some kind of research, I can keep my audience engaged.”

Jaden Partain is a theater major, so creativity always is part of his focus, but Foster’s class has added an extra layer, he said.

“It’s all about changing the way that you think, to bring out your inner five-year-old,” he said. “Normally, you lose your creativity around the age of five, to wanting to go and take stuff apart and figure out how it works. When you get older, you think, ‘Well, I can’t take that apart because I’ll get in trouble.’

Too many people keep their eyes focused on the straight and narrow, Foster said. It’s safe. It’s familiar. It’s not scary. It gets them where they want to go. But those steps usually don’t offer chances to branch out, to learn other ways to express yourself, to discover talents you never even knew you had and how to use them.

“Most are strict in how they approach things, so I keep telling students that you have to be willing to go and capture what we call ‘The Invisible.’ Most people walk in this world with blinders and they only see so far, and you have to reach out and grab something that you see that no one else sees and bring it back to where the world can see it.

“I always use the example of gravity. Does anybody know what gravity is? And, of course, they have the scientific answer for gravity. But how long has it been here? And they just look around and say, ‘Like forever.” But it took an apple to fall on some dude’s head before we even saw it.” 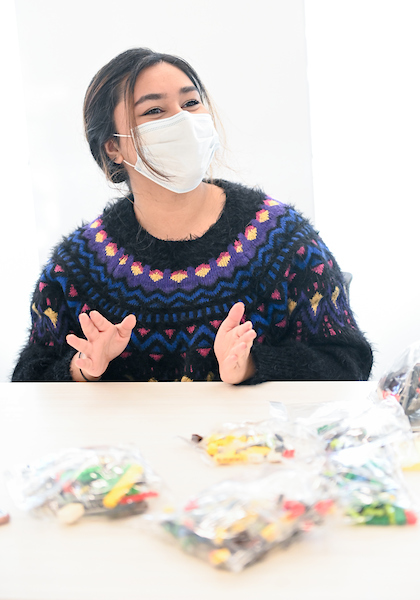 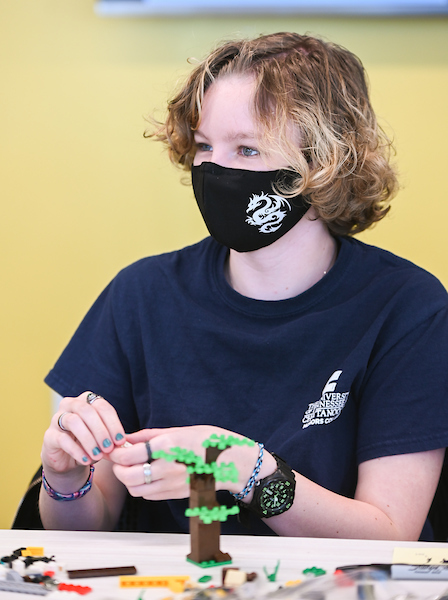 Jaz Holcomb works on her building-block project in the Guerry Center. 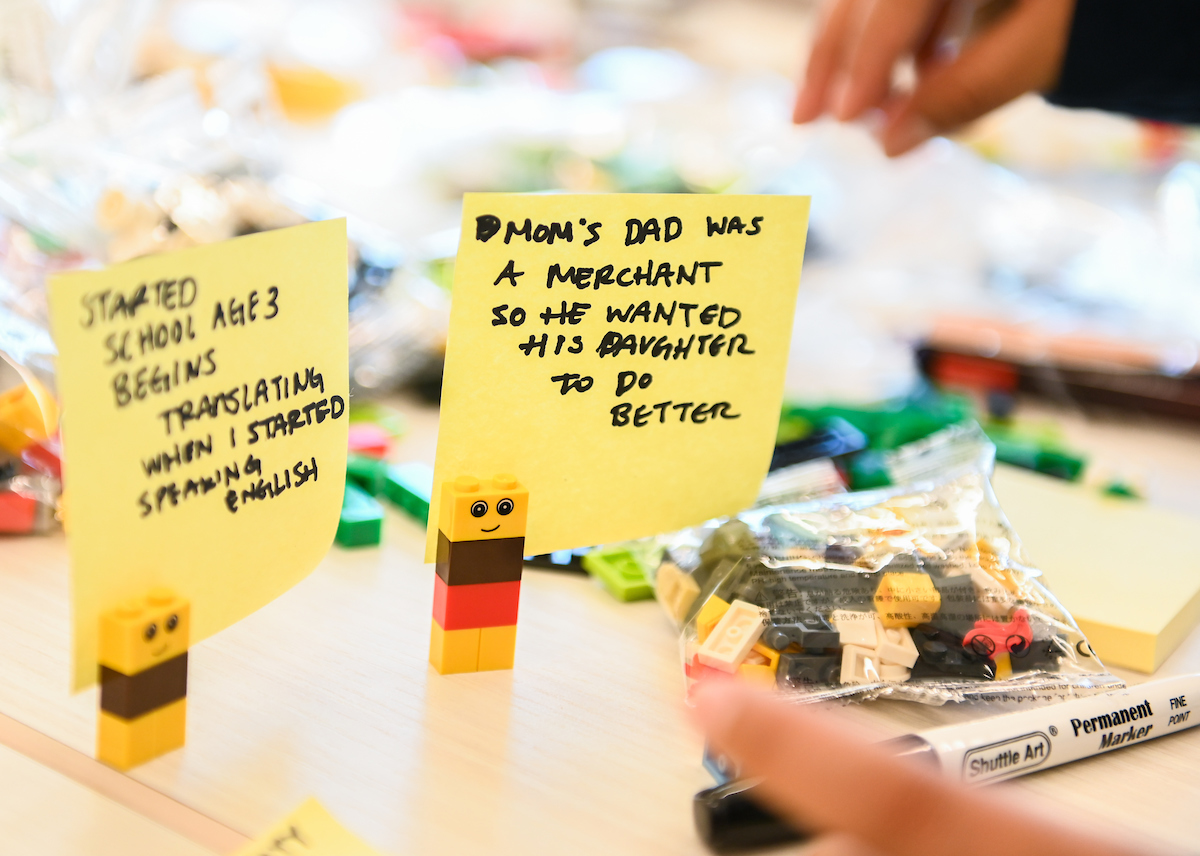 Sawyer Suerth used Post-It notes to write details about her family’s history. Her roots are in Germany, so she used black, red and yellow—the colors of the German flag—to build one of the figures. 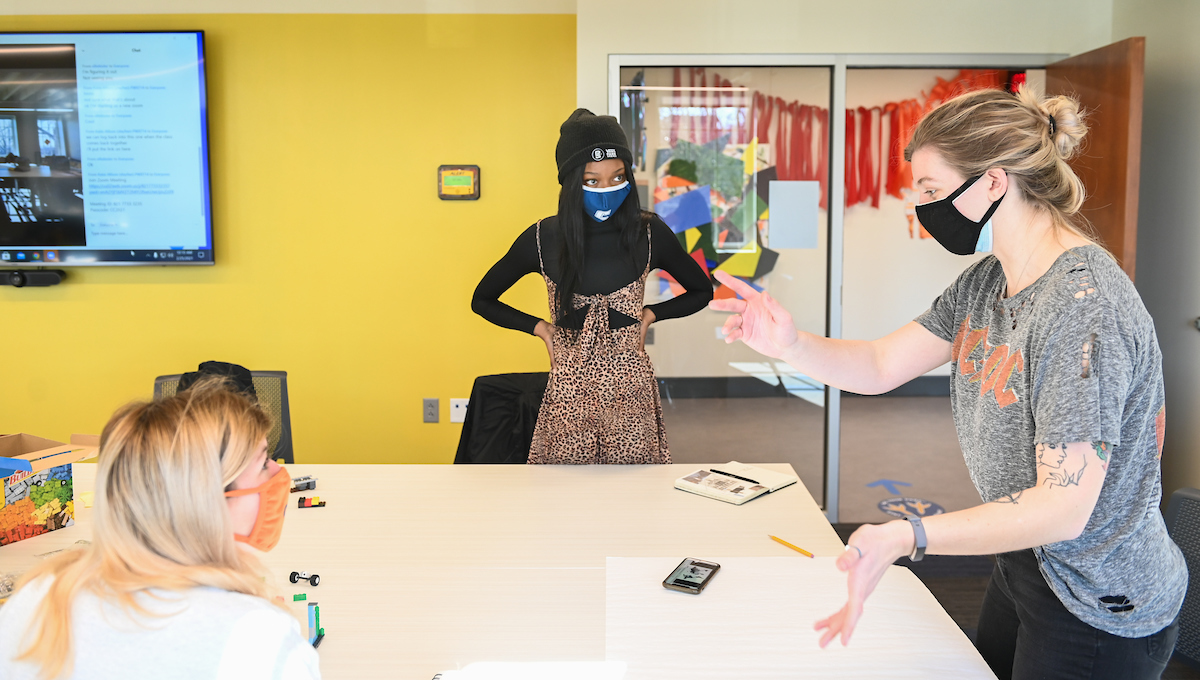 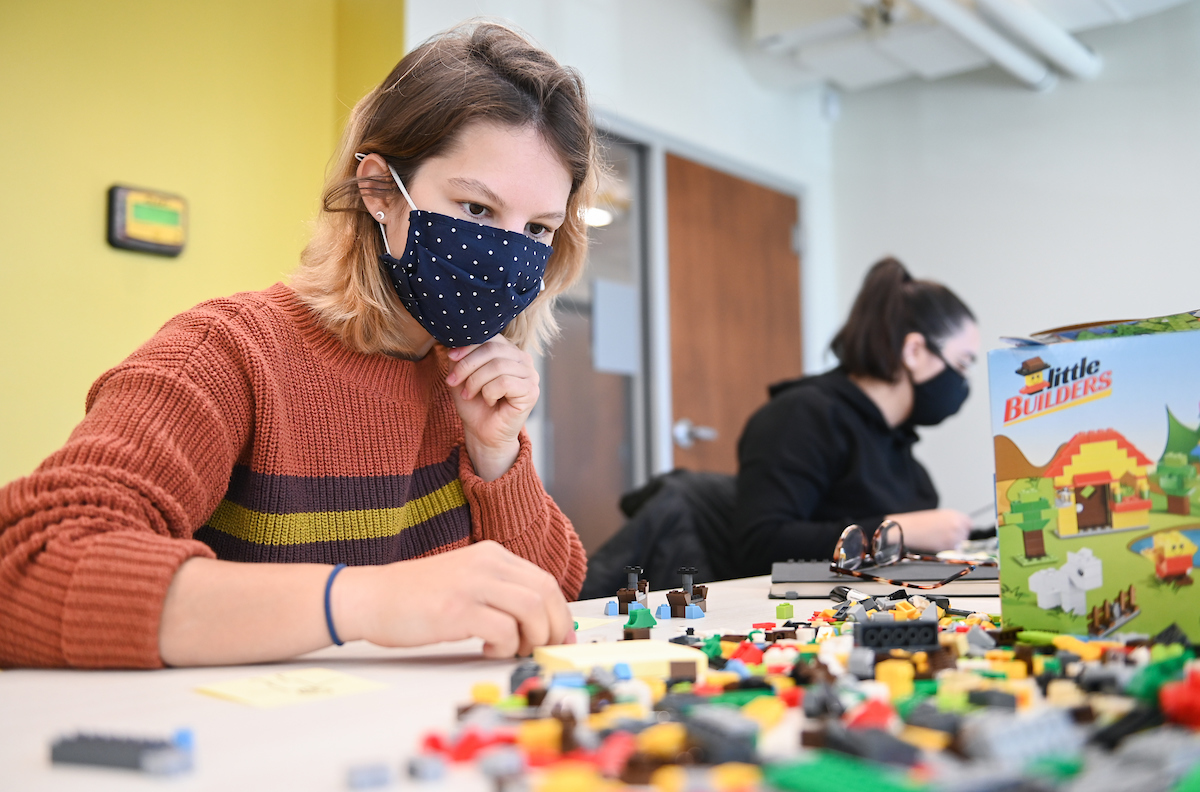 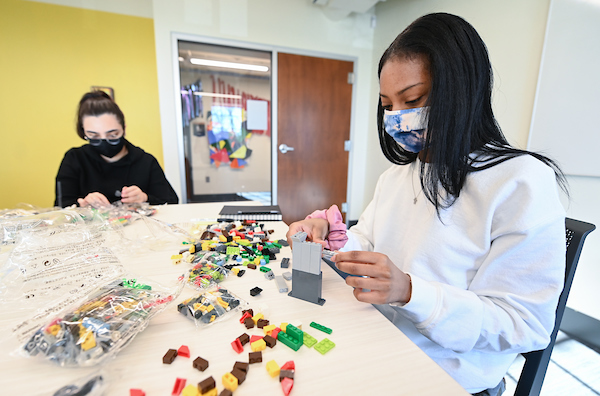 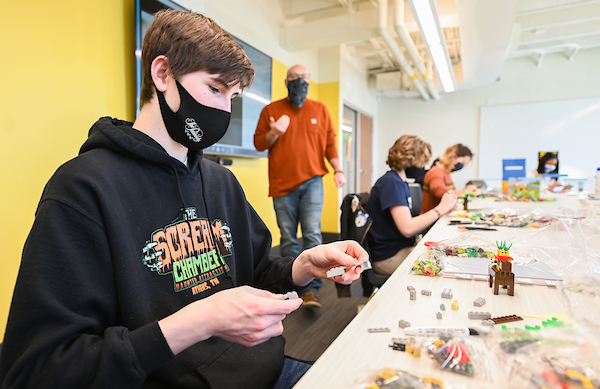 Jaden Partain starts choosing which building blocks he will sue. Professor Owen Foster is in the orange shirt in the background. 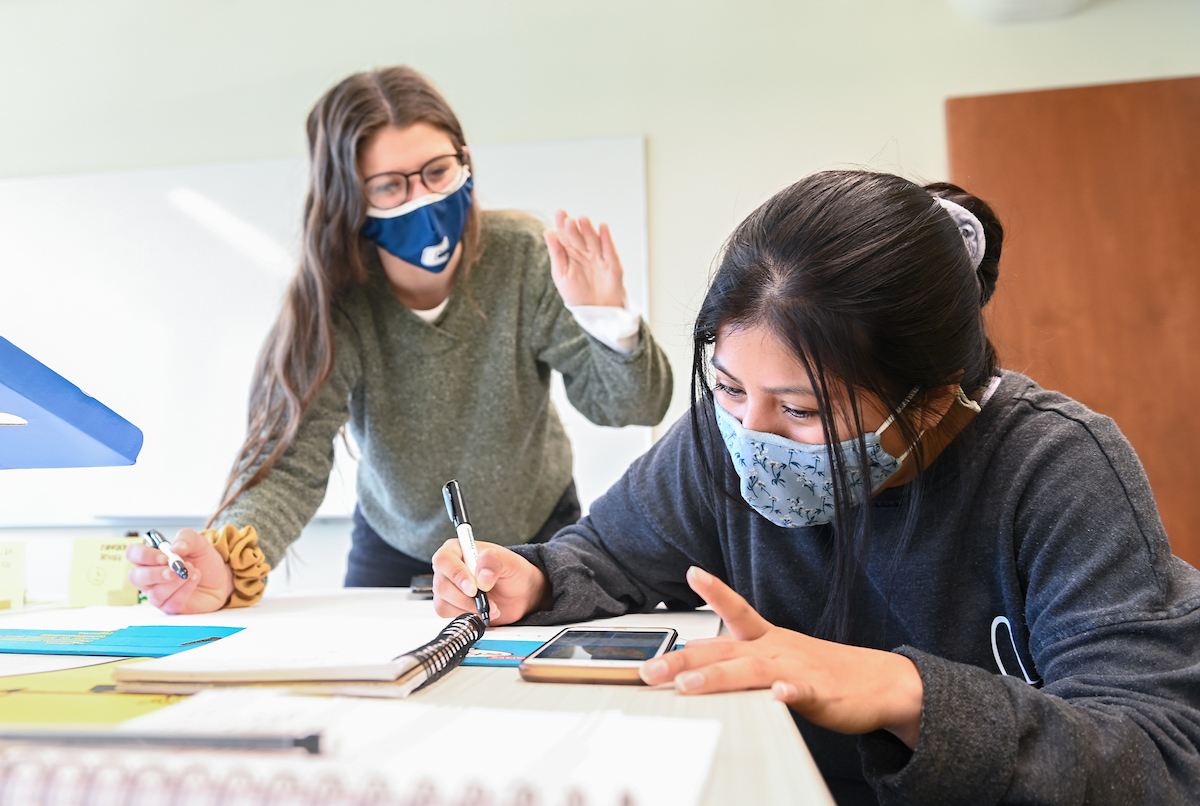 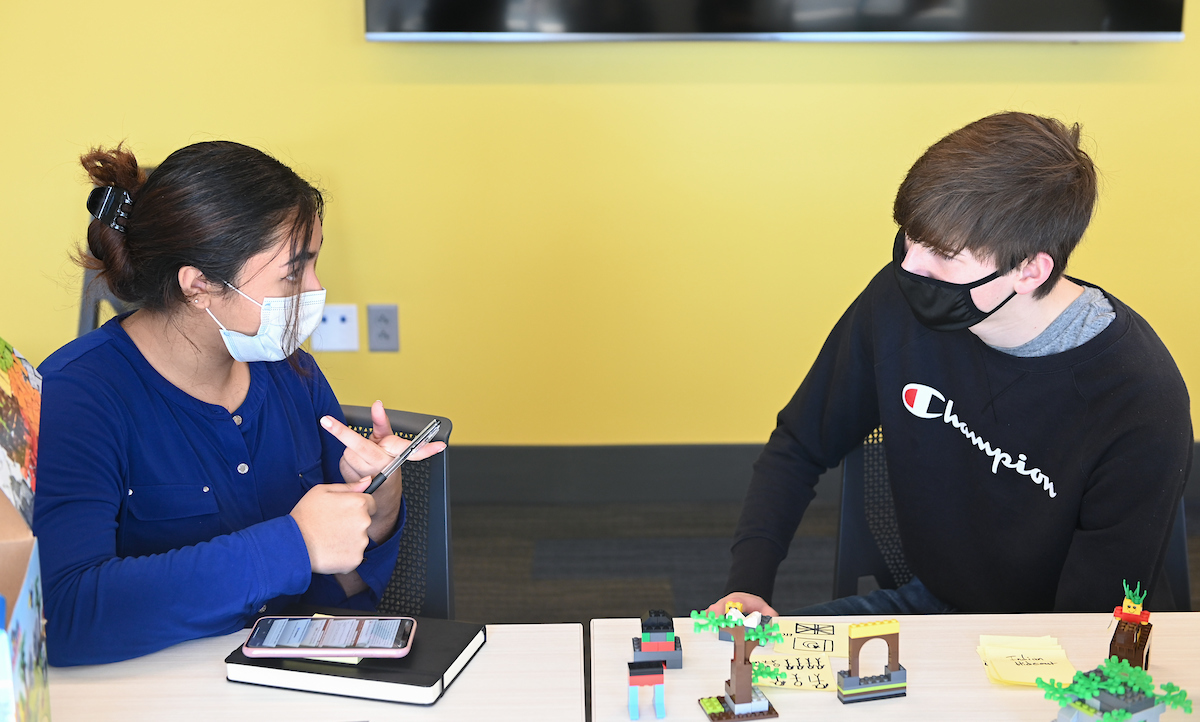 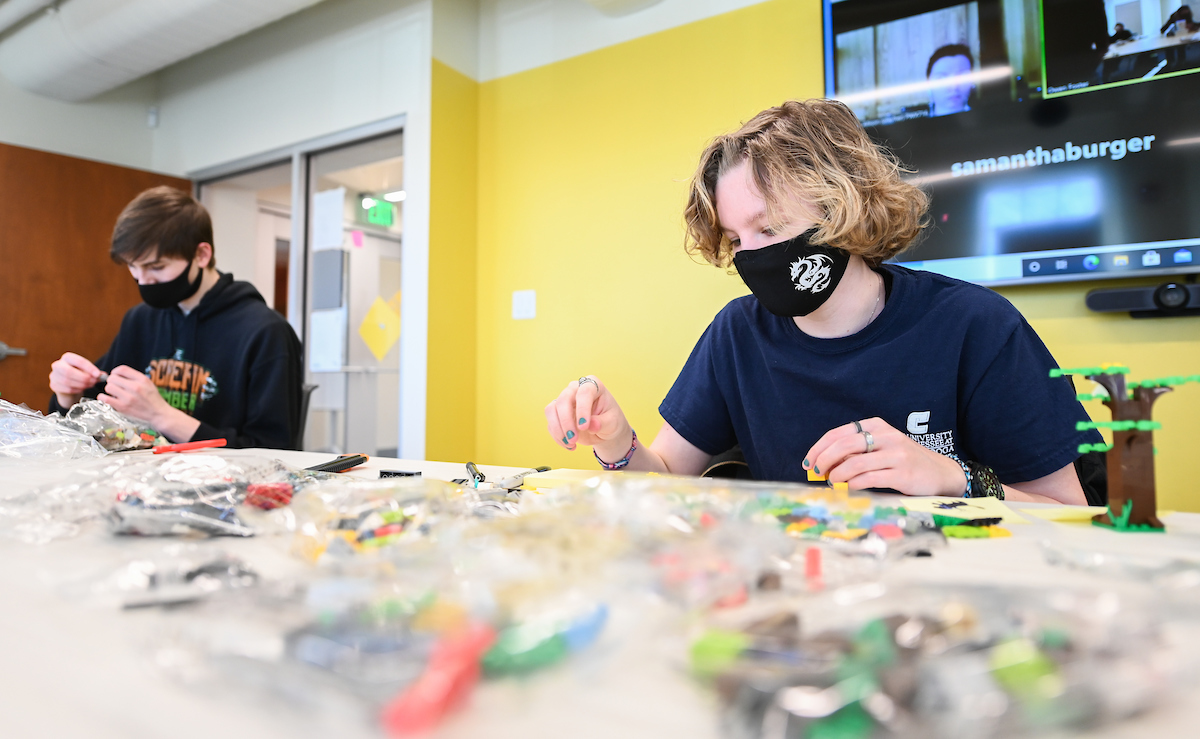 Jaden Partain and Jaz Holcomb sift through building blocks during the assignment. 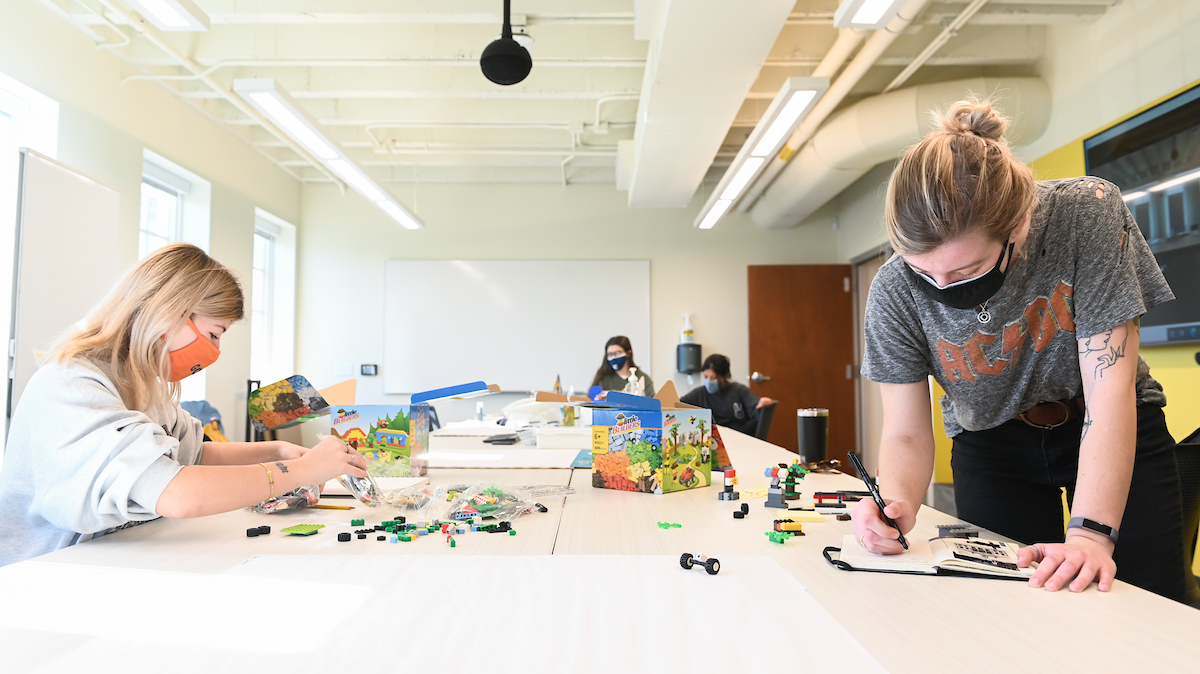 1 Comment » for Class philosophy: ‘Take risks and not just live by the rules’