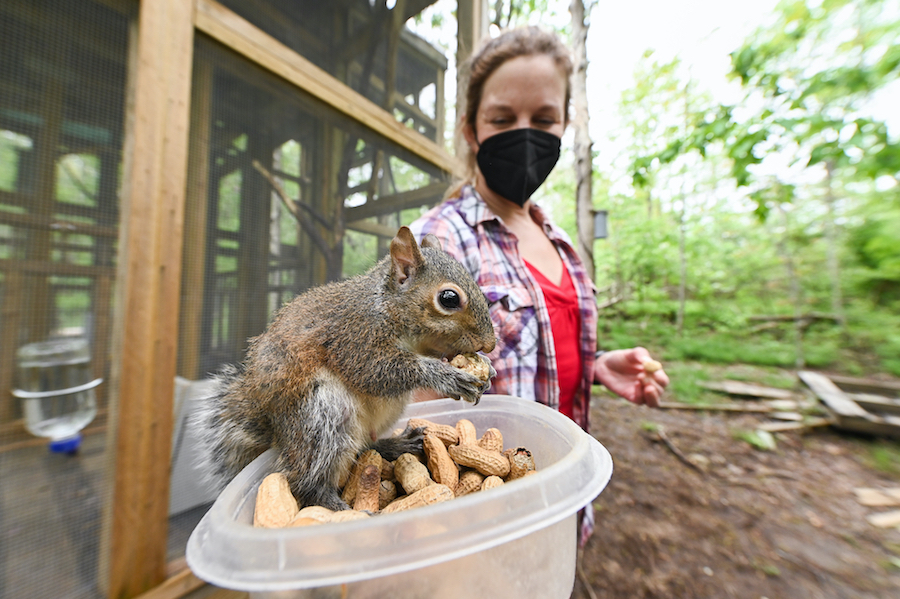 Katherine Harrell offers a dish of peanuts to one of the squirrels in her rehab center,  but it prefers one of her homemade “squirrel cakes.”

Go to the Instagram account “MarshallCreekWildlifeRehab,” where you’ll find the links for an Amazon wish list and how to donate through Venmo and PayPal. (Plus a ton of photos).

The squirrel had finished cracking open a peanut shell and eating the meat inside but was still hungry.

It knew one of the four people standing near had more food, and it was determined to find it. Scurry up one person’s leg. No food there. Scurry down and up another leg. None there, either.

Finally, it located the hand holding the plastic bowl packed with peanuts. But those weren’t the ultimate goal. It started digging, peanuts flying this way and that until it found what it was looking for. A squirrel cake. Nibbling started in earnest.

The cakes are tiny balls about the size of grapes and made by Kate Kinnear (formerly Kate Harrell), associate lecturer in environmental science at the University of Tennessee at Chattanooga.

“They’re crushed pecans and sesame seeds and alfalfa that I have to grind up. Vitamin C, lecithin, cod liver oil, calcium. It’s about 12, 15 ingredients. It’s got all the micro-nutrients that they need,” she said

Store-bought food is out there, she said, but is “super-expensive.”

“If I had to buy it, I would be living under a bridge,” she said with a laugh.

Intensive hands-on work is just part of the equation when rehabbing animals. Certified by the Tennessee Wildlife Resources Agency as a wildlife rehab expert, Kinnear has dozens of squirrels living in cages and large wood-and-wire enclosures at her Signal Mountain home, where Sugar Hill Wildlife Rehabilitation is located. They have ranged in age from hairless newborns to weeks-old ones that must be hand fed formula with a syringe to four-month-old adults ready to be released into the wild.

“It’s amazing just how much you learn by being around them all the time and the more I’m around them, the more I appreciate them because they’re incredibly smart.”

Last year, she planned to incorporate wildlife rehab into a course at UTC, but COVID postponed the idea. For spring semester 2021, though, she had the help of Luke Mainello, a senior in environmental science who came to Kinnear’s home-based squirrel compound a few days a week as part of his senior experience, a requirement for graduation in the environmental science program.

Rehab work has given him “total appreciation for the amount of work that gets put into this.”

“It’s just the seriousness of it, the discipline,” he said. “You don’t even think about all the effort needed to do this, but it is an around-the-clock job. It’s not somebody who wants to come out and just play with them.”

Dedication is critical for rehabbing, Kinnear said, and so is understanding that these are wild animals, not pets.

“A lot of people come into it thinking, ‘Oh, I’m going to play with squirrels and I’m going to put on my Facebook and everything.’ That’s not what they’re for.”

Kinnear started rehabbing animals in 2012 and was certified by TWRA in 2016. “It’s not the kind of thing you learn on the fly. That’s not fair to the animal,” she said.

With its tight budget, the TWRA doesn’t fund wildlife rehab. Through its certification program, rehabilitators act as go-betweens for the public and the state agency, including answering questions or concerns about injured wild animals that people find.

“This is a compromise of sorts between the two extremes of either allowing the public at large to attempt rehabbing with no education or experience or supervision—a disaster in the making— or forbidding them from helping wildlife,” Kinnear said.

Each year, rehabbers must submit a report to the TWRA, outlining the number of each species taken into a facility, the date each animal was admitted, where the animal was found, why it was brought in and what happened to the animal.

Focusing strictly on rehab—no other type of research is taking place at the moment—costs for running her facility average about $8,000 a year, with about $7,000 for food and formula, Kinnear said, and all the money comes from donations.

Over the years, people have brought her squirrels, cottontail rabbits, opossums and chipmunks, among others. Some animals have come from as far away as Memphis, she said.

“I just need you to do one thing “ she said. “I need you to get that animal to me. If they do just that one thing, I’m going to do everything else.”

She doesn’t rehab birds or reptiles, nor does she take in predators such as raccoons, foxes or bobcats since they terrify the smaller animals.

Squirrels are her main focus, and many are orphans. While most are brought to her, she once found babies while trail running, hearing their chirping, almost-bird-like distress calls. She located one, took it with her on her run, then came back and found two more.

In most cases, babies are abandoned only if the mother is dead, Kinnear said.

“The mother gets caught by a hawk or somebody hits her with the car. I’ve had a couple of times when people shoot the mom,” she explained.

“Squirrel moms are very good mommas. They’re committed and they’re not going to just abandon their kids for no reason.”

As part of his work, one of Mainello’s jobs is to bring wounded animals to her.

“I  get a text from her just saying, ‘Hey, somebody out in Cleveland needs a squirrel picked up.’ So if I don’t have a class, I’m pretty much free to go grab him, come back and drop him off,” he explained.

Once the squirrels understand that Kinnear is the fountain of food and not dangerous, they often become less afraid and will let her handle them. In some cases, the squirrels zip up her pants leg and shirt to perch on a shoulder.

On a recent day, Kinnear and Mainello sat on her front porch, handfeeding three squirrels only a few weeks old and still on formula. With gusto, the babies drink formula through a plastic syringe.

It’s cute as all get out, but you must move beyond the cuteness factor to actually rehab them, Kinnear said.

“A lot of people see squirrels as novelties, something for their own gratification. But it’s not about how you feel. All decisions need to be made for them.” 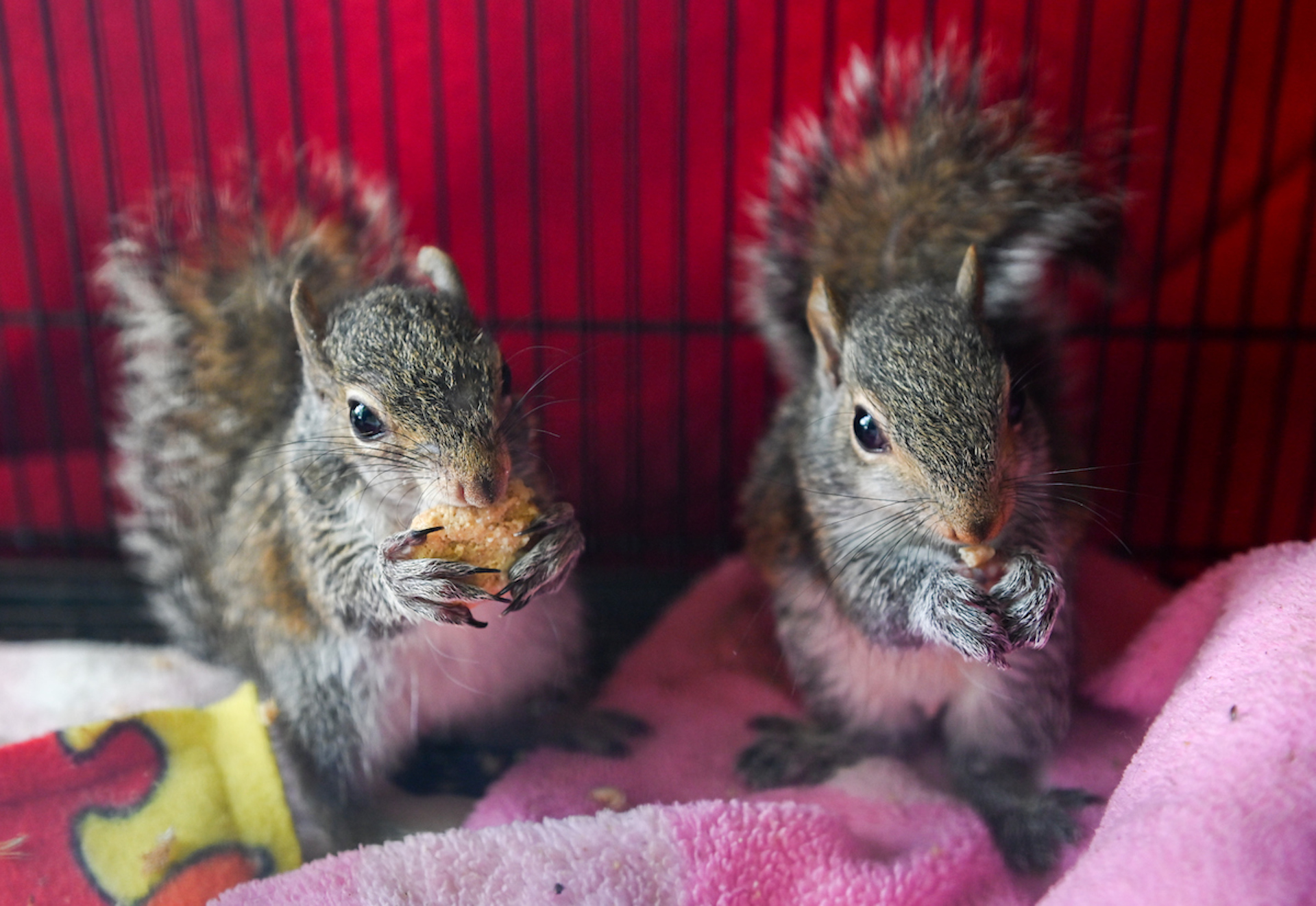 Squirrels are often kept together in cages, even if they’re not from the same family. But arguments are rare. 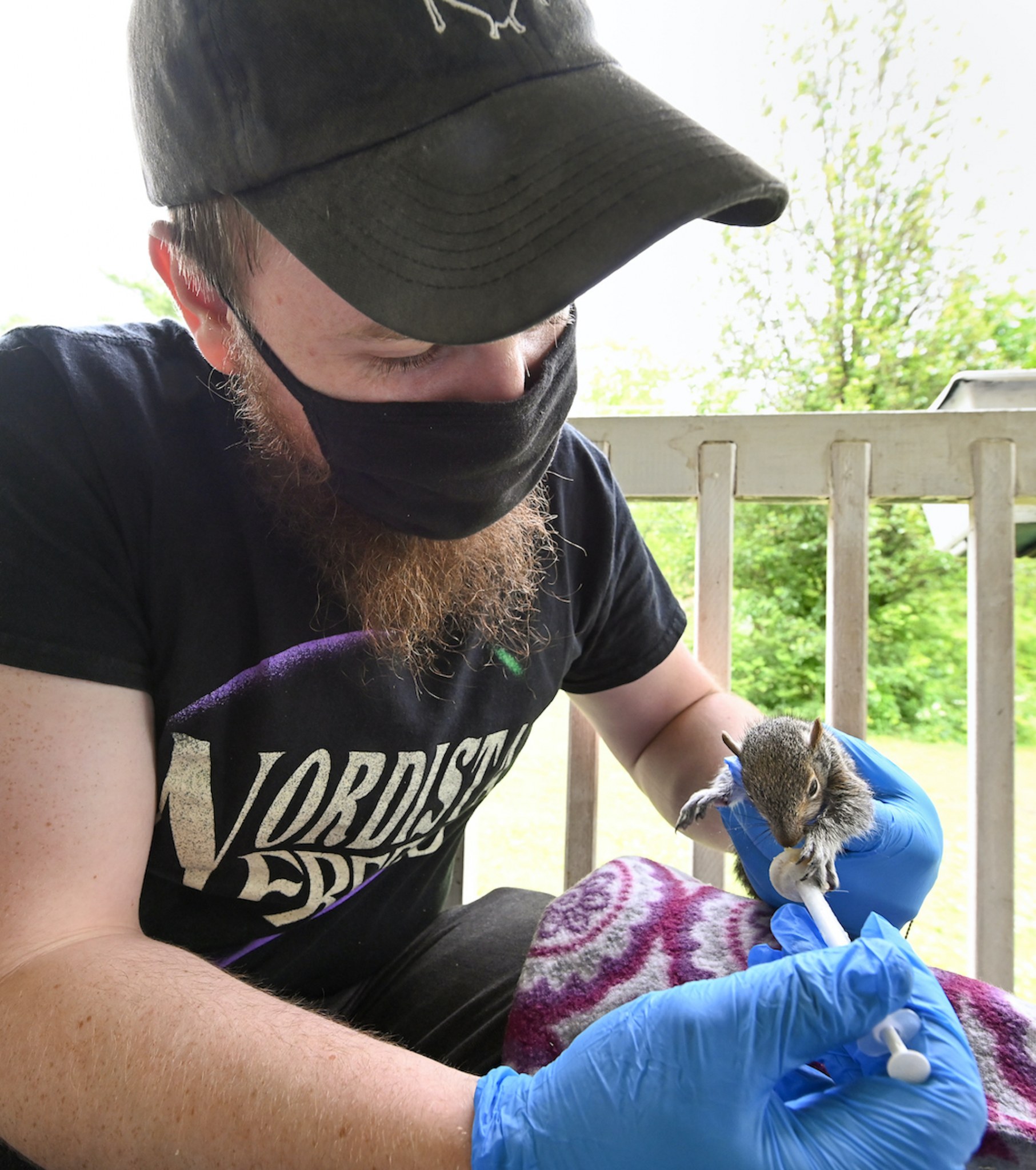 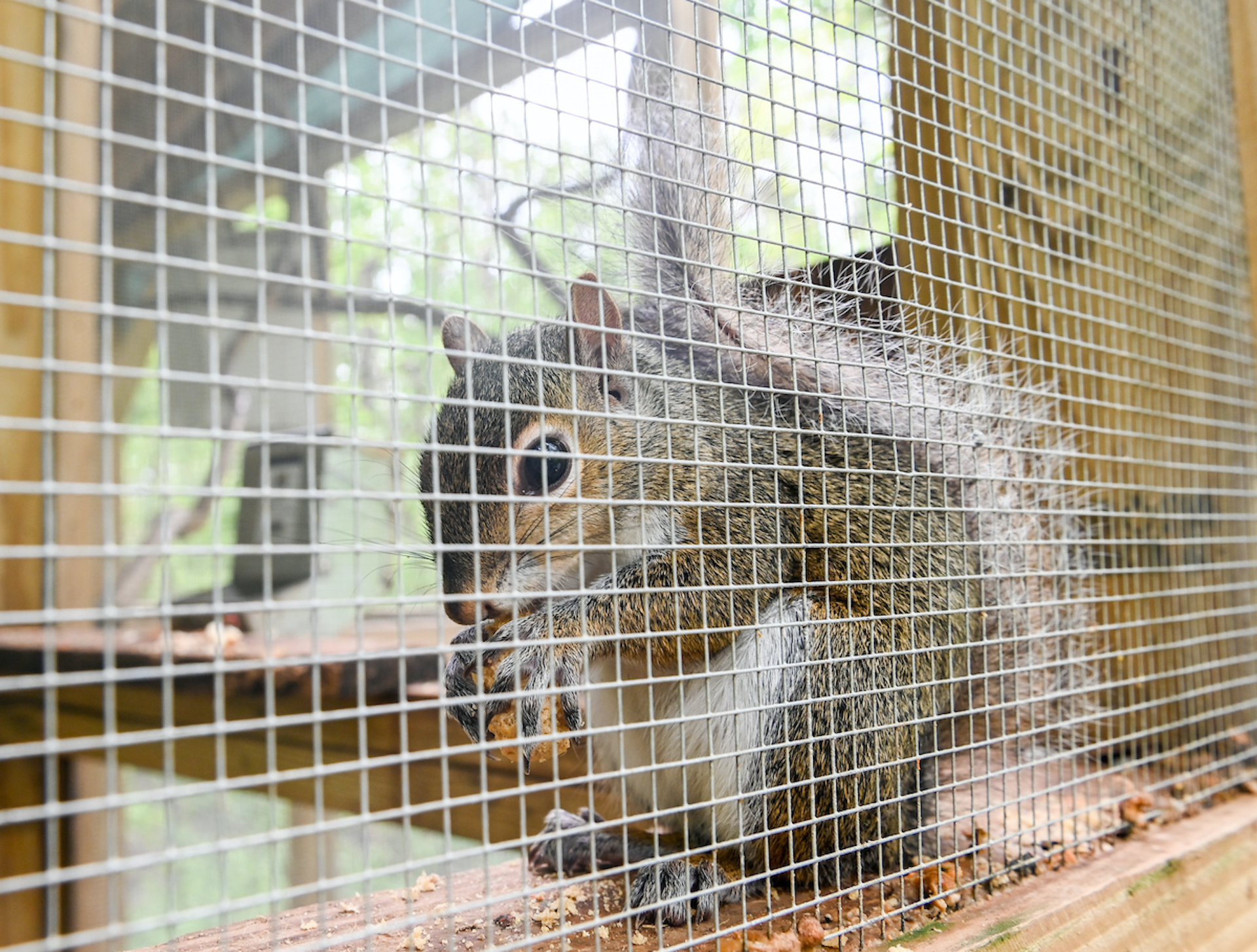 While no where near pets, squirrels at the rehab center are more comfortable around people than squirrels in the wild. 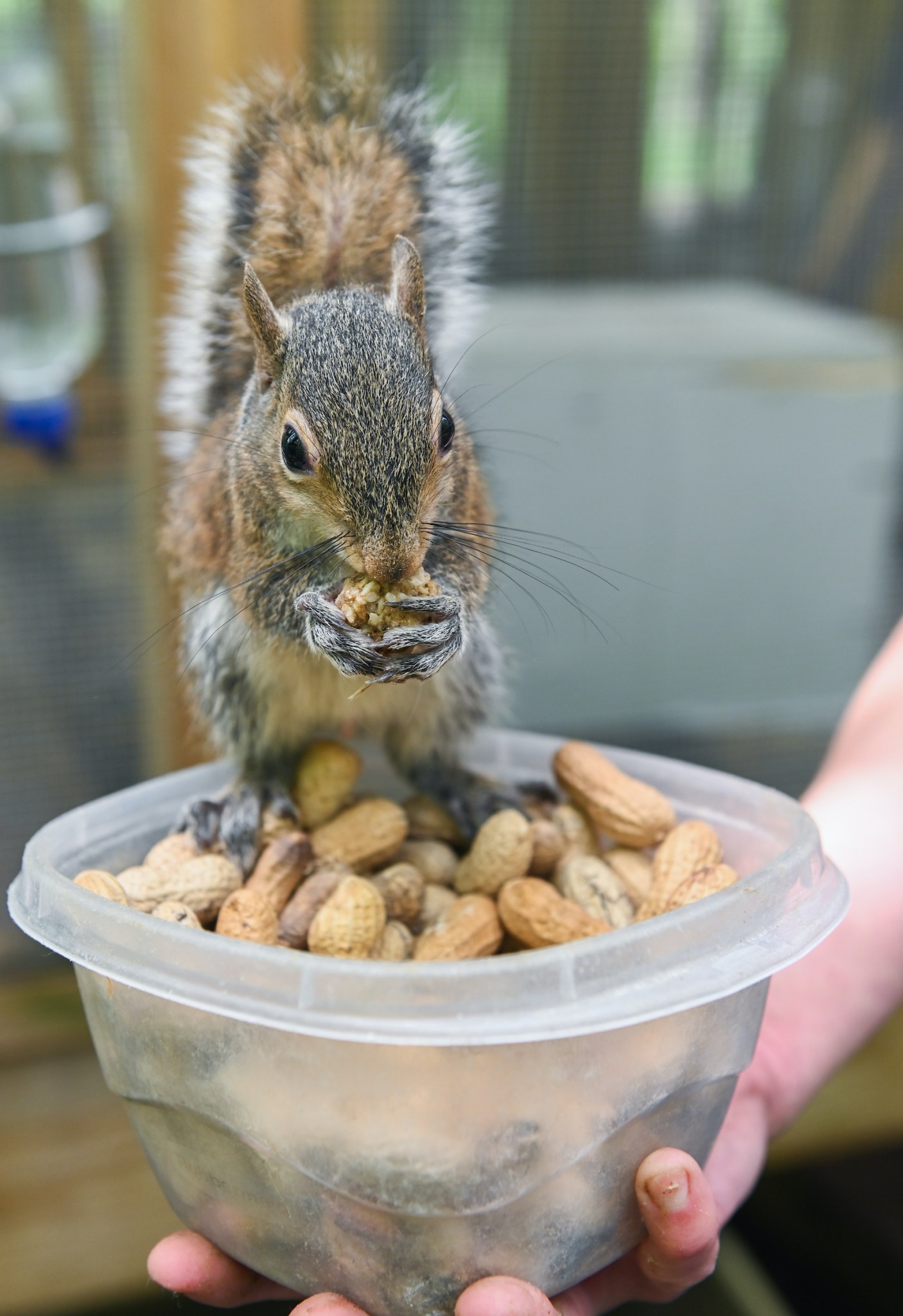 Squirrels have a varied diet. 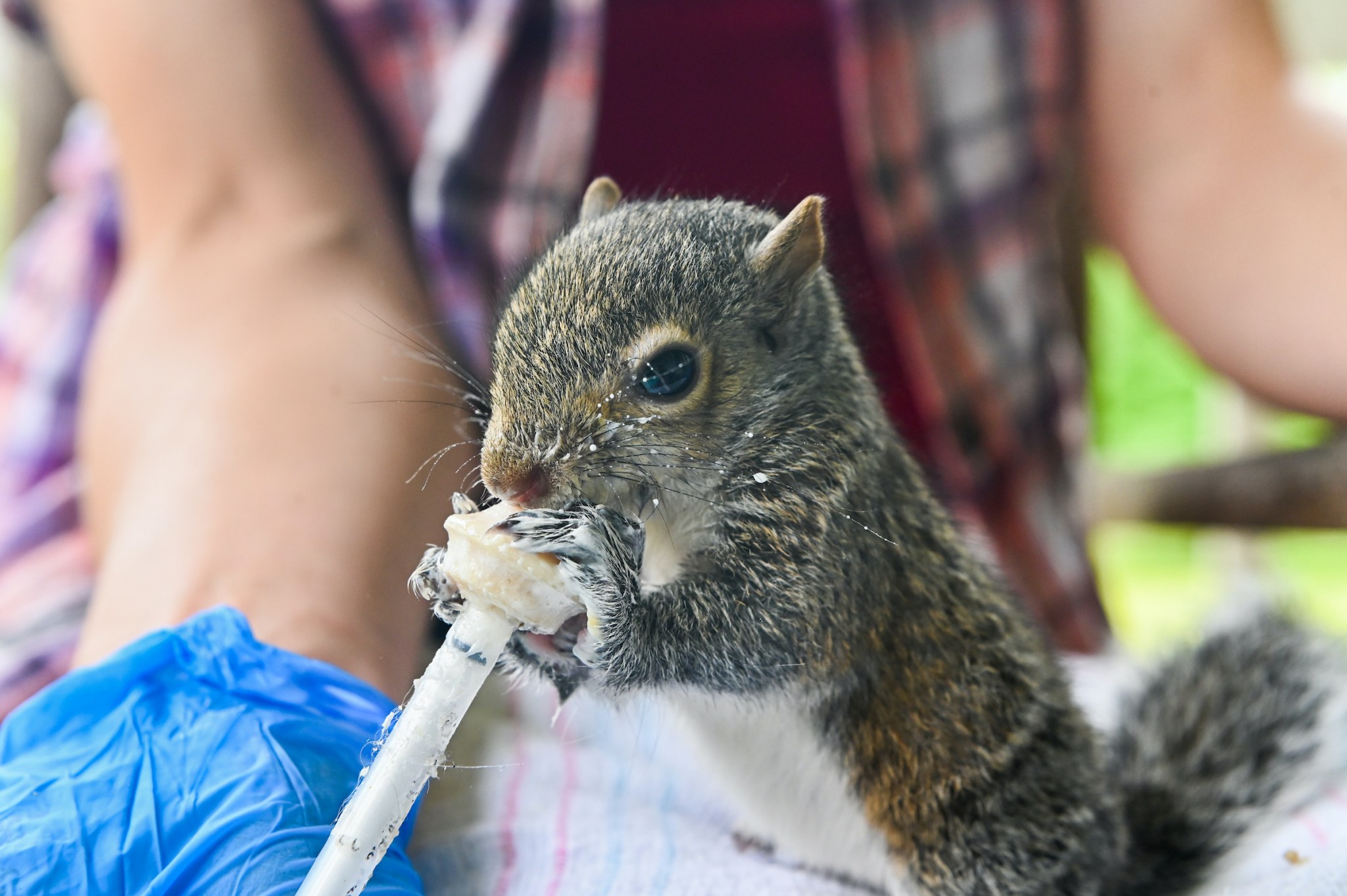 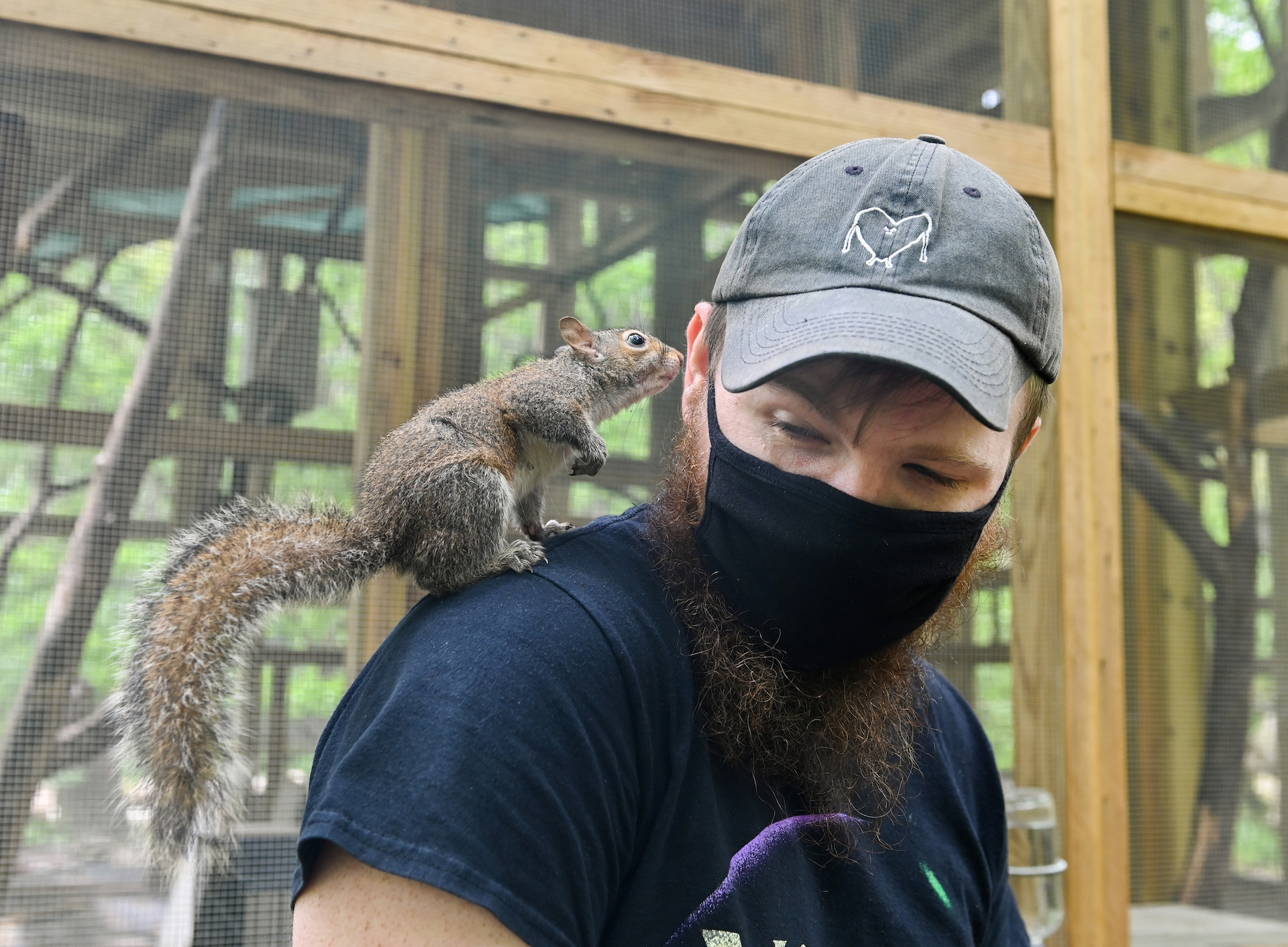 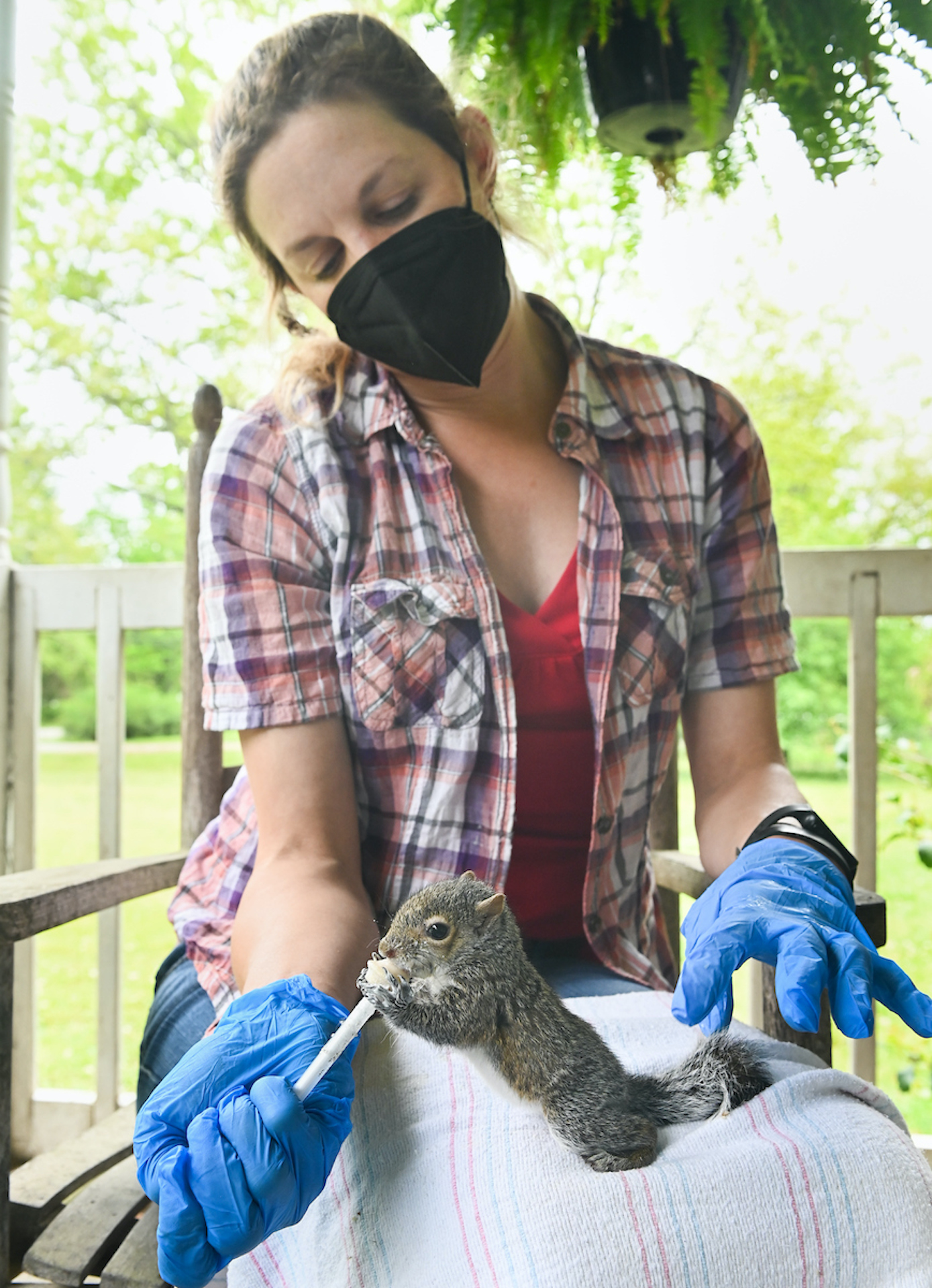 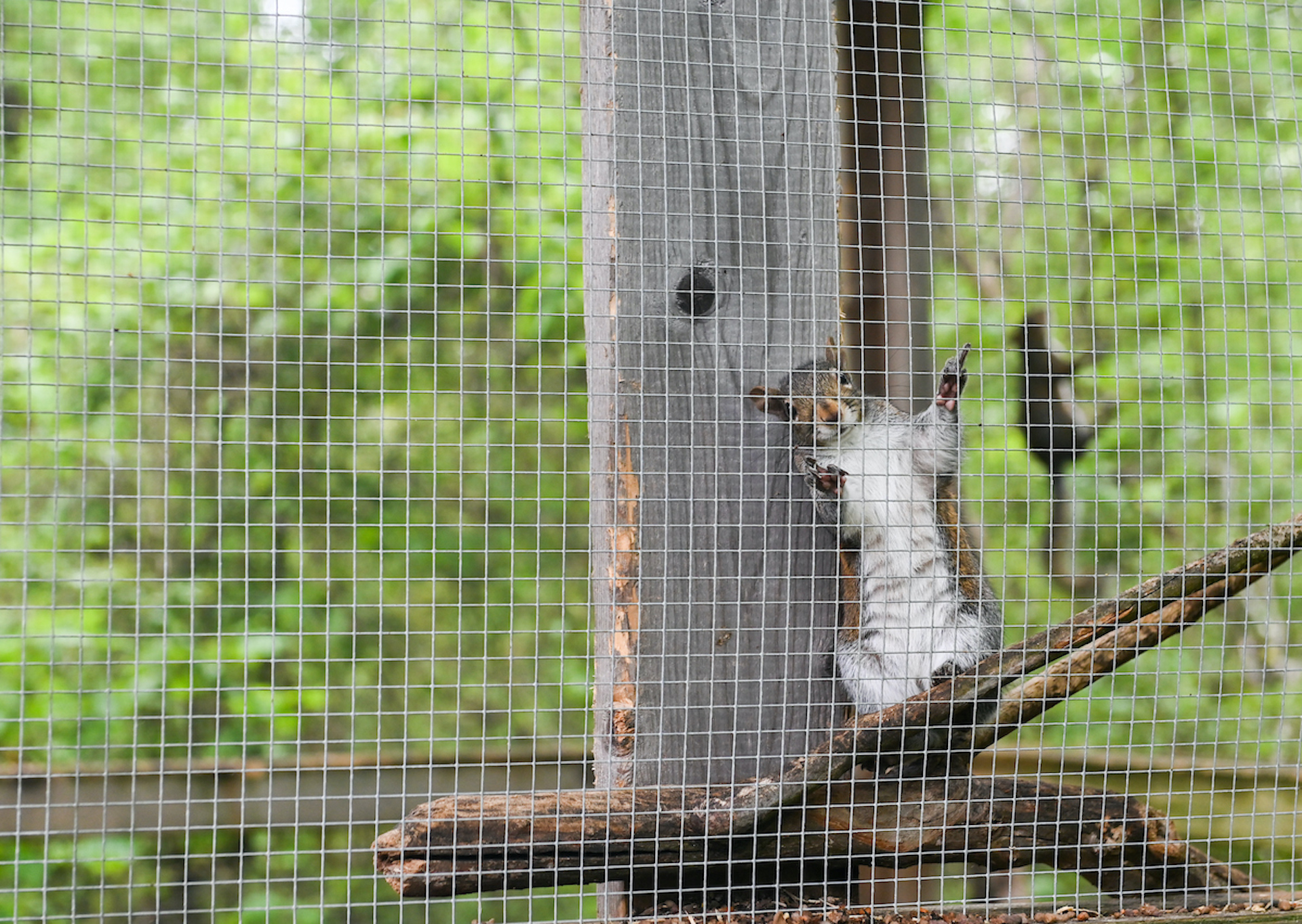 Squirrels who are almost ready to be released back into the wild for good are kept in an enclosure that allows them to enter the woods but come back to a place that makes them feel safe. 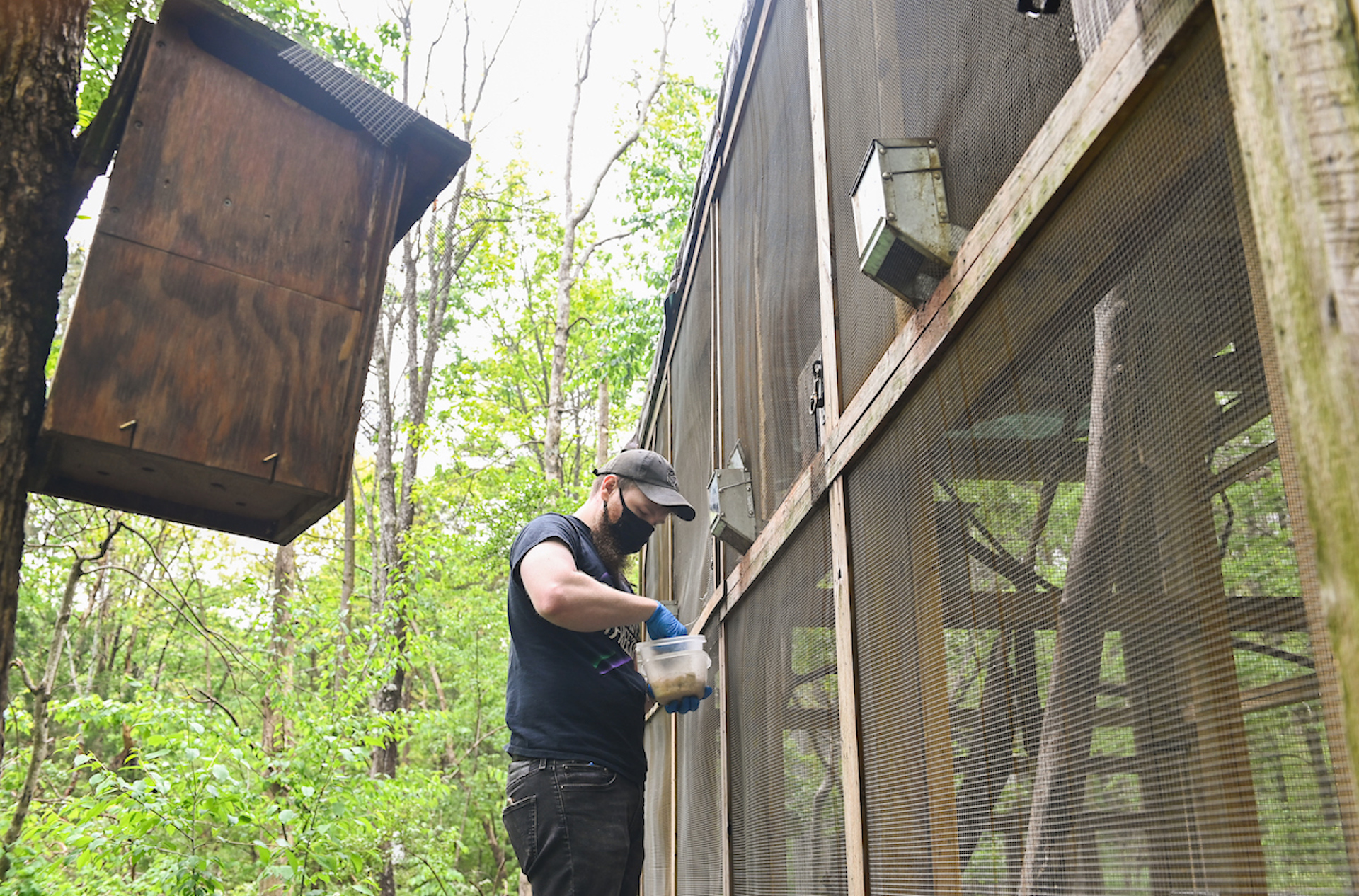 UTC student Luke Mainello feeds squirrels who live in a large enclosure and are almost ready to be released into the wild. 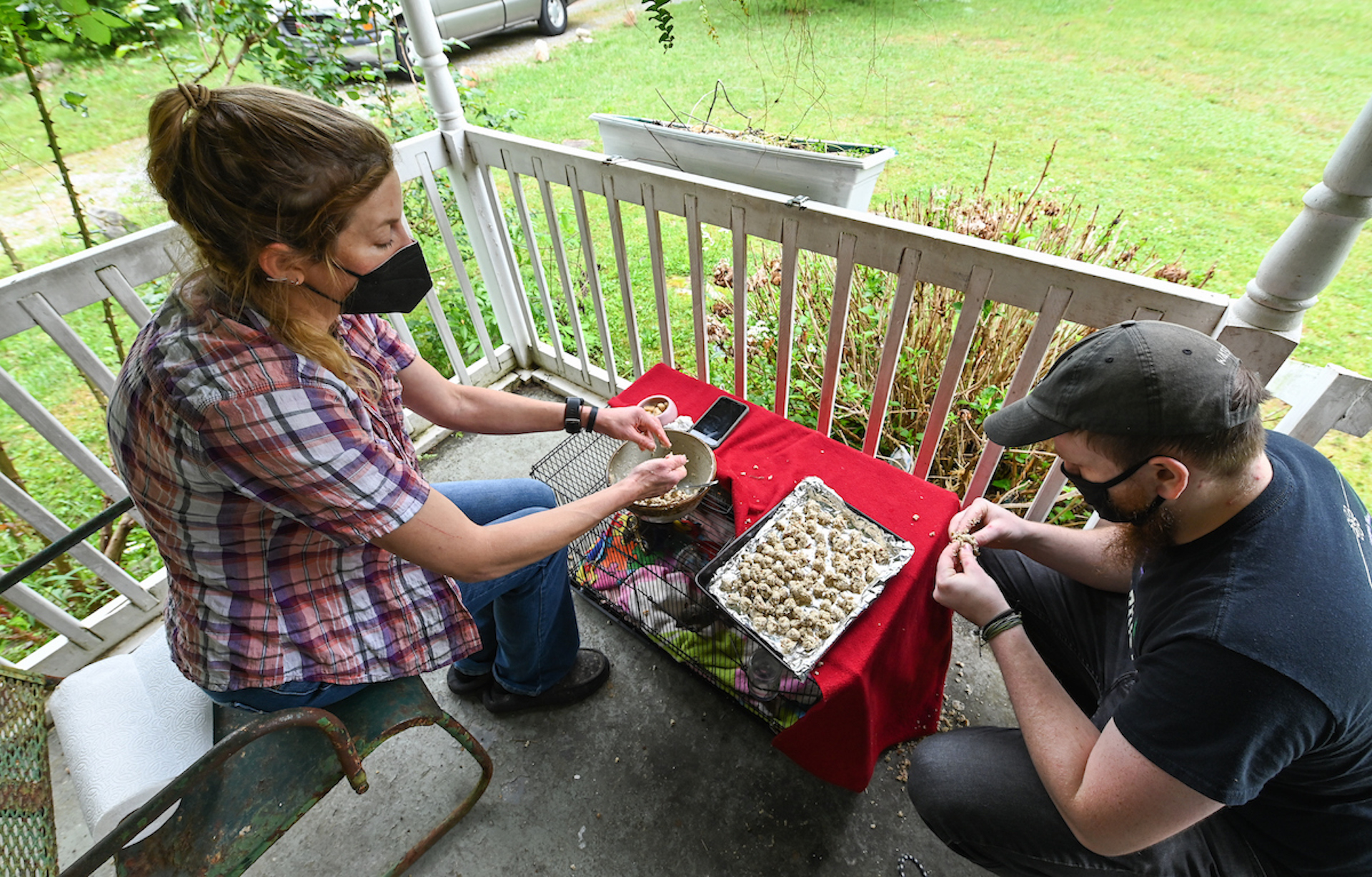 Kate Kinnear and student Luke Mainello put together “squirrel cakes,” which are made from crushed pecans, sesame seeds, alfalfa and other ingredients. 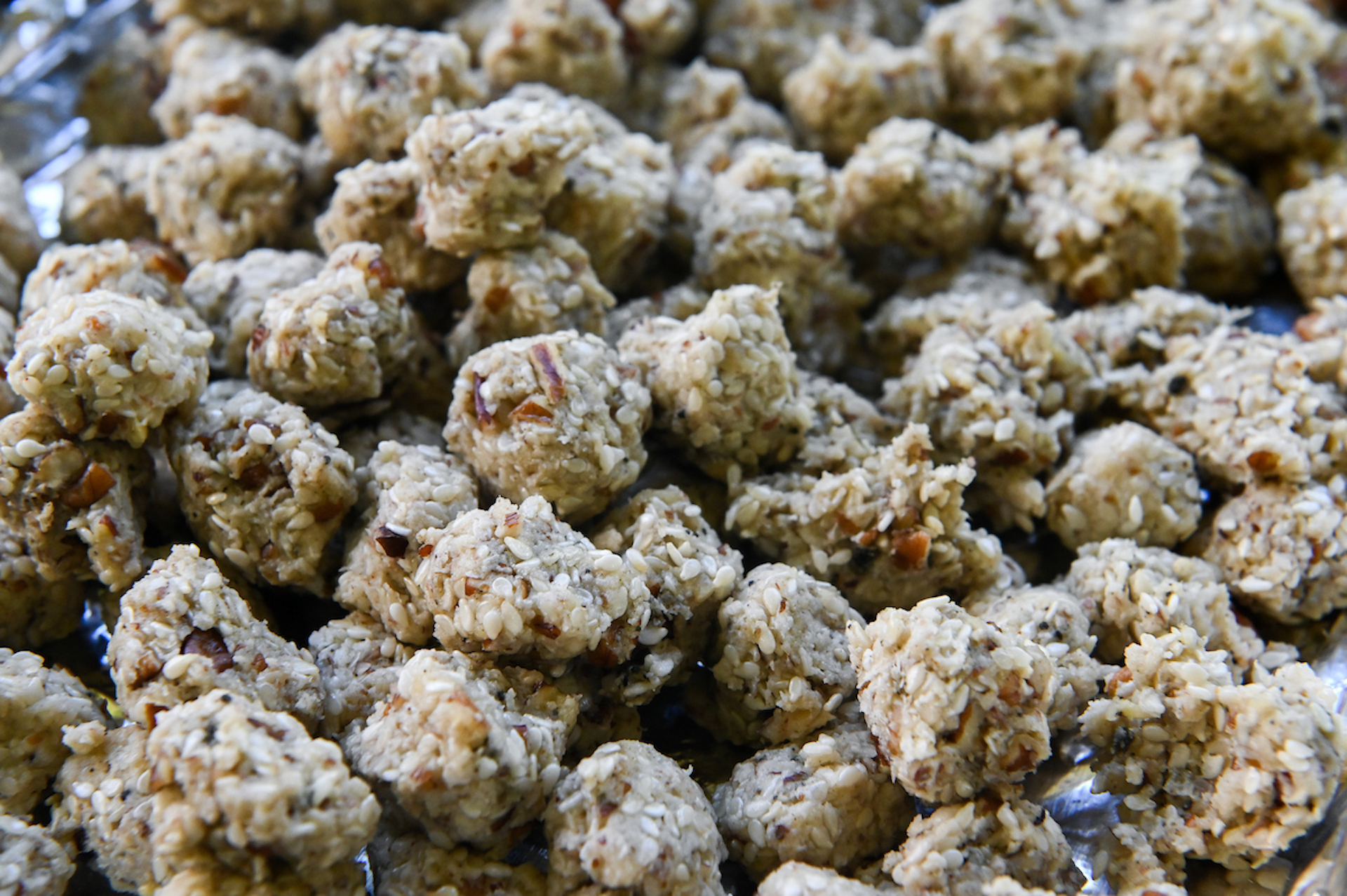 3 Comments » for Hurt when they arrive; healed when they leave