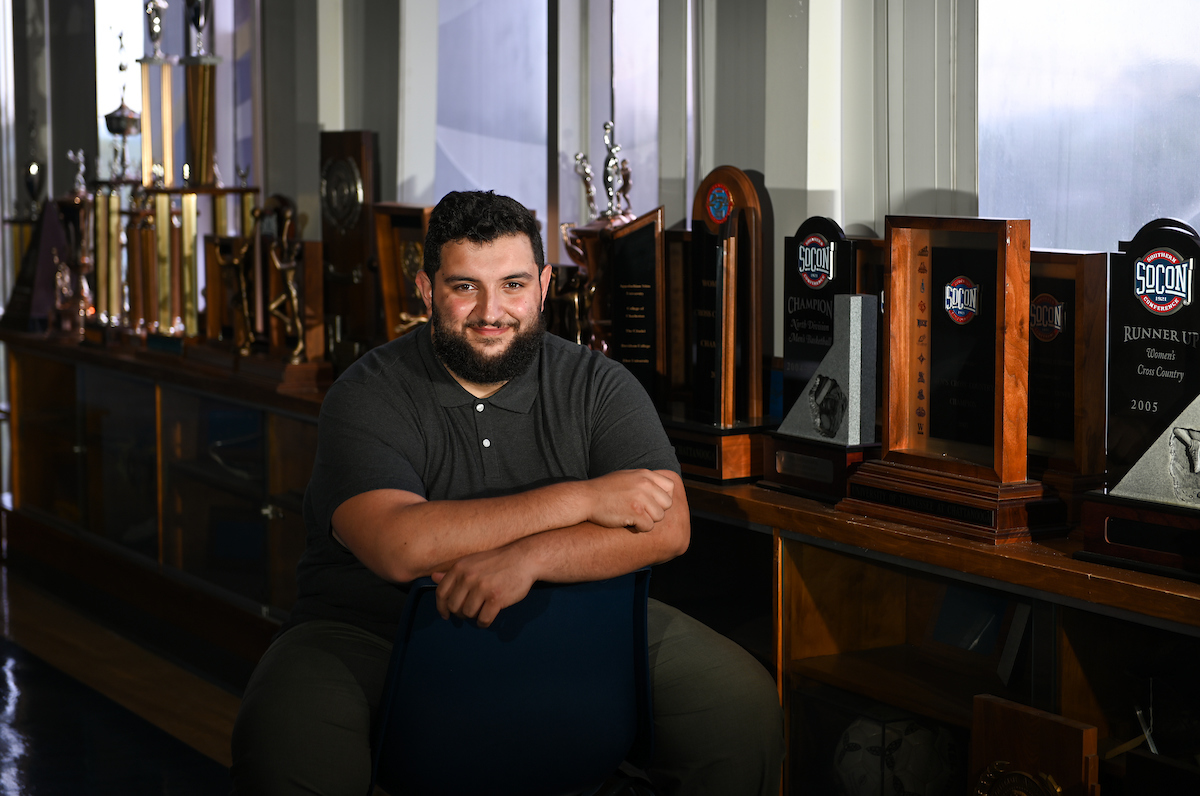 As the new kid on block, Athletics Counselor Christopher Cannizzaro had to embed himself within the athletics family during the middle of the school year.

As one of his athletics department co-workers aptly put it, Chris Cannizzaro has had to “drink from the fire hydrant” over his first five-plus months on the University of Tennessee at Chattanooga campus.

Last year, funding was allocated to hire a counselor for student-athletes. The idea was that the UTC Counseling Center would provide clinical and administrative oversight, with the position fully embedded within the Department of Athletics.

After a national search, Cannizzaro—who has master’s degrees in clinical mental health and clinical psychology—started at UTC on Jan. 4.

“When he got here, he had to drink from the fire hydrant; there was no drinking from the water hose,” said Nate Barger, UTC assistant athletics director for sports medicine. “He had to interject himself into our daily lives because we were already full steam ahead at that point. He was figuring out how he fits into the athletics family, but the coaches and the staff saw the importance of having him here and they really wrapped their arms around him.

“Chris’ ability to relate to a head coach, an athletic trainer, a student-athlete, a manager, an administrator … he is able to interact with everyone. He has a gift for it.”

“When people think of athletics, they automatically assume, ‘Oh, they get everything they need,’ but that’s not true. We are still humans, and sometimes the student part of student-athlete gets lost,” Cannizzaro said.

“We ask a lot of our student-athletes. They have school, training, practice, post-practice meetings, pre-practice meetings. Ballpark, it can be 40 to 50 hours a week that they are giving to their sports.

“They’re so busy and they have these added stressors and pressures. Sometimes, they need to be reminded to take a second, breathe and remember what it is about their sport that they fell in love with in the first place.”

“As far as we can tell, this is the first time a school in the state of Tennessee has done this model of embedding the counselor in athletics,” said Keilan Rickard, director of the UTC Counseling Center. “There is research that shows that athletes are an underserved population when it comes to their mental health. Academics already is a full-time job, so anything you add to your course load is going to be potential for stress.”

Having a mental health professional in athletics is unique for programs not in the SEC, Pac-12, ACC, Big 10 or Big 12, five conferences known as the Power Five.

“When they told me, ‘We want to give you somebody specifically for athletics,’ that was a game-changer,” Barger said. “Having Chris here as a sounding board for stuff that student-athletes are going through and the emotions they are feeling—and helping them work through those emotions—is such a huge resource for us.”

It’s one thing to start a new job, but Cannizzaro joined the University in the middle of a school year and during COVID-19, which brought its own share of stressors. Just weeks after his arrival, UTC intercollegiate athletics entered a period in which every sport was competing at the same time.

He led workshops and sessions called “Let’s Talk” with groups of student-athletes. A simple Q&A, it introduced him and broke the ice. He also contributed to an interdepartmental UTC Eating Disorder Task Force.

At the same time, he found himself adapting to the local culture while dealing with the challenges of telehealth service delivery.

“Coming in here, being the new kid on the block, it was about making friends and letting athletic trainers, coaches, staff and students know who I am as a person,” he said. “I wanted them to know, ‘Chris is a good listener. He’s empathetic. Our student-athletes will be in good hands when they work with him.’”

With the start of the summer months, Cannizzaro finally has a chance to prepare for a typical academic/athletics calendar and take a deep breath of his own.

“Everyone around here has been nice. Everyone is polite and welcoming. I’m excited about finally getting the chance to explore the area and learn my way around campus,” he said.

“I’m from Long Island, and if our daily trip ran 10 minutes, we’re cranky. So getting used to the pace here has been the biggest thing.”

1 Comment » for New athletics counselor is a ‘game changer’