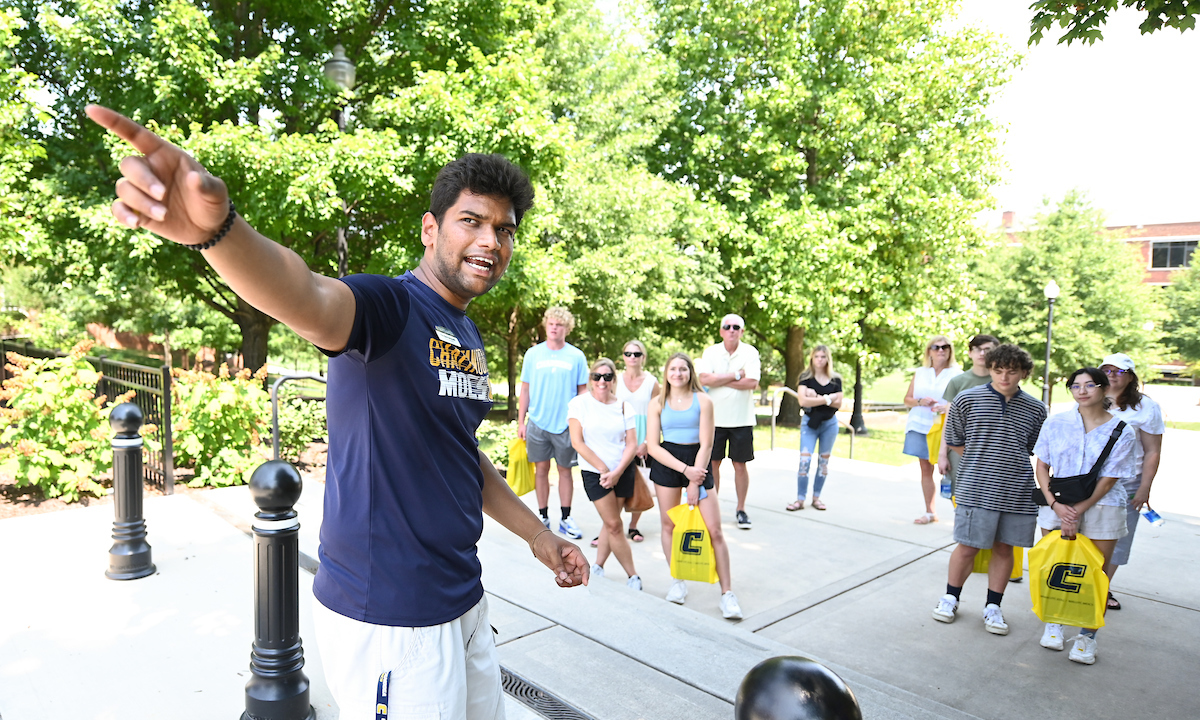 “I cannot shut my mouth. I love to talk and tell jokes,” said Sai Bandarupalli, a tour guide for prospective UTC students.

It’s a scene played out nearly every weekday on the University of Tennessee at Chattanooga campus this summer.

A group of rising high school seniors and their family members stand in a semicircle in front of some iconic spot on the UTC campus when their tour guide drops an out-of-left-field question on them.

For instance, “How much did Santa Claus pay for his parking?”

Welcome to the world of UTC campus tour guide Sai Bandarupalli, a most unconventional ambassador.

Bandarupalli, pursuing a master’s in computer science with a data science concentration, did his undergraduate studies at Amrita Vishwa Vidyapeetham University in Coimbatore, India, graduating with a degree in computer science in 2018. After working as an application developer at Accenture, he decided to pursue a master’s.

“I did some research, and UTC is one of the few universities that offered a data science concentration inside the computer science specialization,” Bandarupalli said.

“I applied and they accepted me, so I was like, ‘Wow, if you take me, then I’ll take you’ and that’s how I wound up at UTC and in Chattanooga.”

As a student with an F-1 visa, which allows foreigners to pursue education in the U.S., Bandarupalli said he can work on campus up to 20 hours a week during the semester and 40 hours during the summer. So he immersed himself in multiple on-campus jobs, including working at the Chick-fil-A at University Center. Those experiences are a part of his tour routine.

When a post for campus tour guides appeared in his email, he was intrigued. One of the primary responsibilities, of course, involves talking.

“I cannot shut my mouth. I love to talk and tell jokes, and that’s the only thing I’m good at,” Bandarupalli said with a laugh. “So I thought, ‘Let’s give it a shot.’

“The first question they asked me at the interview was, ‘Why should we hire you?’ and I said, ‘My friends request that I stop talking because I can not shut up, and this job literally pays you to talk. People are ready to hear my jokes. So I think this is the job for me.’”

Dana Adams, assistant director of recruitment and publications at UTC, oversees campus tours. She was immediately drawn to Bandarupalli’s charisma.

“Sai is really high energy and has a dynamic personality, and personality is a huge part of what we look for,” Adams said. “Obviously, you have to know and love the University first and foremost because our goal is that the people who come on tour get to see just how much our students love being part of UTC so they can see how they would fit in with our UTC family.

“Sai has a unique UTC story given that he’s a graduate student, that he’s international, that his first time in the United States was here in Chattanooga. Plus, he’s a big joker, a performer in a way,” Adams added.

Just a couple of years ago, Bandarupalli had never been to the United States. On top of that, English is his third language.

“In India, each state has its own language, and my mother tongue is called Telugu. Hindi is my national language and is common for everyone and, when I was studying in Tamil Nadu for my undergrad, I learned Tamil as well,” he explained.

“I’ll be honest with you. When I came to the USA, I was confident because I’m pretty sure that I was going to make friends, but I have a different accent. Sometimes people don’t get what I’m saying, and I was ready for that.

“But people were so welcoming at UTC, and that gave me a lot more confidence. When I think about it, it makes me want to talk about UTC even more.”

As he leads his tour groups around campus, Bandarupalli blends factoids and information with improvisation and comedy. Along with reciting scripted facts as they stroll from building to building, he works in one-liners and self-deprecating humor, creating a rapport with those around him—remembering names, potential majors, what questions people asked him earlier.

“The more interactive the crowd is, the more fun the tour is,” he said. “and this is a dream job for me being in a different land speaking a different language and showing people around campus.”

Adams said one of Bandarupalli’s strengths is that he is very good at connecting with introverted high school students as well as their parents.

“Sai is naturally gifted at it. He can talk to anybody about anything,” she said. “I think it’s important to be able to make those kinds of instant connections with people and make them feel comfortable. He does a really good job of making people talk and helping bring them out of their shells.

“I think what’s fun for me to watch as his supervisor is that he has tapped into a skillset and a gift he probably didn’t even know that he had. I think he has found his niche, and he loves every minute of it.”

“I asked the police officer if I could spill coffee on his wrist,” Bandarupalli says as his tour group assembles outside Guerry Center.