by Safety and Risk Management January 21, 2020 — No Comments 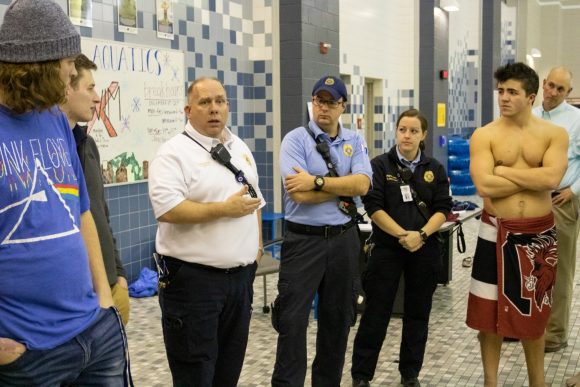 On January 10th The University of Tennessee at Chattanooga Campus Recreation staff had both Hamilton County and UTC first responders participate in an emergency response scenario. Campus Rec Aquatics team held their first in-service training of the semester with an additional step, witnessing firsthand how professionals arrive to the scene of an emergency.

Coordinator of Aquatics Craig Gosnell plans ahead for each training to show different themes, this time was the “big picture” to help staff play a role in their Emergency Response System. “Having UTC Police Department, Safety and Risk Management, and local Emergency Medical Services play a role was a powerful experience for our staff,” Gosnell stated during a debrief. “Typically our trainings end with me saying ‘EMS arrives and takes over’. In this instance, we were really able to see what that transition was like.”

The scenario had Campus Rec staff draw roles, unbeknownst to others, for a staged drowning inside the pool area of the UTC Aquatics Recreation Center. Once the staff were assigned their duties, they dispersed throughout the pool deck to simulate a party. When the designated swimmer indicated signs of struggling to stay afloat, lifeguards took into action while the rest of the staff cleared the pool deck of the patrons.

A regular response from both UTC PD and local EMS may be within minutes; however, Coordinator Gosnell wanted to practice a worst case scenario, “Campus Rec requires all its students and professionals to be certified in CPR, AED, First Aid, and Blood Borne Pathogens Training.” Gosnell had all lifeguards rotate on a practice dummy performing CPR and using a practice AED for 8 minutes until paramedics arrived.

“Hamilton County EMS feels inter-agency training is extremely beneficial to all responders involved,” District Supervisor Lieutenant Hoyt Dalton shared, “I was impressed with the communication between all lifeguards on implementing rescue and response to the event.” The transition took place with paramedics Aaron Howard and Sarah Holloway discussing the state of the victim which concluded the scenario.

UTC Campus Rec Aquatics holds ten in-service trainings throughout the year for their lifeguards which includes many elements and topics not limited to just the pool deck inside the ARC. “Each program area (fitness, intramural, UTC outdoors) is required to hold four safety refreshers per year. We cover topics such as active shooter, bio-hazard clean up, and medical response.” Coordinator Gosnell went on to explain his future ideas for the next in-service trainings as well as holding more comprehensive exercises that involve working with outside organizations. Lt. Dalton also stated, “I feel the students interaction with Hamilton County EMS during the scenario and debriefing was very positive and welcomed. We thank you for the opportunity to be included in the exercise, and welcome additional outreach.”