by Safety and Risk Management September 3, 2019 — No Comments

In celebration of September being National Campus Safety Awareness Month, community partners and UTC are promoting overall campus safety with an emphasis on fire preparedness. The Fire Fair will be hosted on campus by Emergency Services in collaboration with Student Development, Student Housing and ThinkAchieve on September 4th.

The Chattanooga Fire Department will be putting out a controlled burn trailer, provided by the National Fire Sprinkler Association, on the new pedestrian section of Vine Street. The exercise will begin at 2:15 near the intersection of Douglas Street and Vine Street between the UTC library and Maclellan Gym. Tables from numerous UTC groups and other local vendors will also bring the fun and giveaways starting at 2pm with the documentary and presentation of After the Fire: A True Story of Heroes and Cowards held at Derthick Hall 101 starting at 6pm followed by a Q & A with its stars Llanos and Simons. See the film’s trailer here.

In 2011 a single dorm fire in Lockmiller Apartments thankfully resulted in no injuries or casualties, but caused $15,000+ in repairs. Another infamous fire incident involving UTC students was the Sigma Chi house fire back in 1998. Several students were injured with second and third degree burns all due to a simple lit candle setting the whole house ablaze.

While attending a safety forum back in 2017, our own Life Safety Technician Joel Wands heard two individuals speak on their connection to one of the deadliest college fires in recent history. Shawn Simons and Alvaro Llanos were roommates at Seton Hall University who suffered critical burns in the Boland Hall fire of 2000; three students died and many more were injured as a result of a prank. After the Fire is their story on the firsthand experience, the brutal aftermath and trials of overcoming adversity. Wands remained in contact and knew inviting them both to promote fire safety would be a, “tremendous insight for all students, faculty and the community here at UTC.” This inspired the idea of promoting a collective safety event and give the student body a better understanding on how to be proactive. 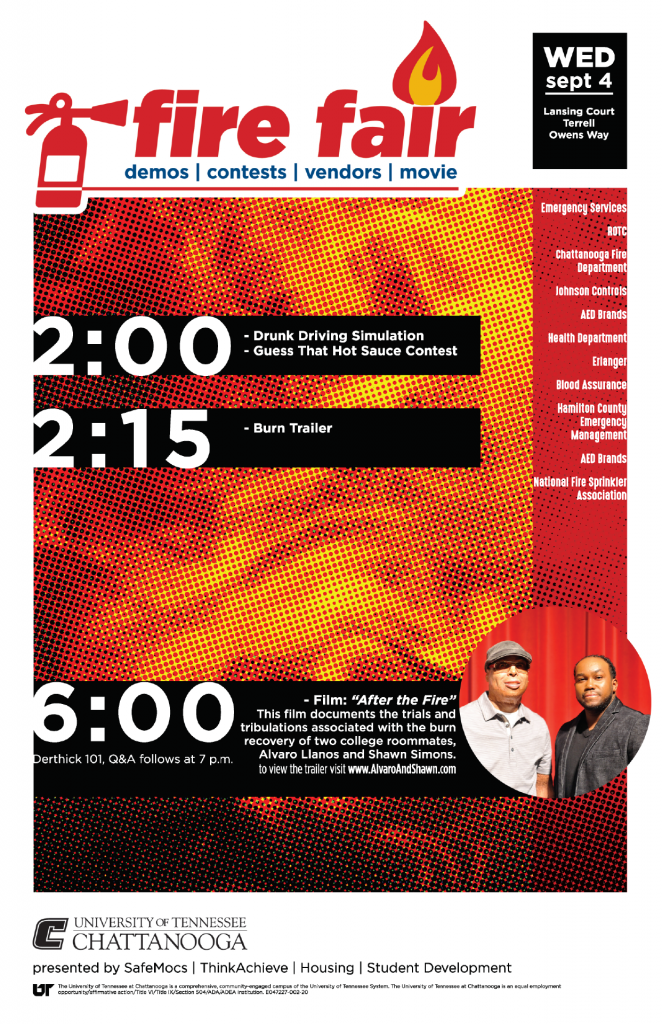 Official poster of the event.