UTC Chair of Excellence Physical Therapist David Levine is a pioneer in the field of animal physical therapy.

TToby looks up, big brown eyes beaming, a huge smile on his face. He is four years old and without a care in the world. Most importantly, he’s mobile and moving fast.

Toby is a mixed breed dog who lost function in one back leg last fall. He wears a diaper for incontinence. Yet he races around in pure joy now that he is attached to a wheelchair. His physical therapist looks on, making sure the dog and the apparatus are working together, shall we say, paw-in-paw. “We’re looking for things like is this fitting correctly behind the elbow?” explains David Levine, the dog’s physical therapist. “This cart has to have these little stirrups because he’s paralyzed. His feet will hang here versus a dog that might be able to put them down and use them a little bit.

“So, his back is pretty straight. One question we have is this pretty close to his hip? It looks pretty good. We want his back to be as straight as possible. We don’t want the wheelchair to be an up or down.”

Levine’s day job is in the practice of human physical therapy. His passion, though, is in helping animals. He is a professor and the Walter M. Cline Chair of Excellence in Physical Therapy at the University of Tennessee at Chattanooga. He also is an adjunct professor at the University of Tennessee College of Veterinary Medicine and the North Carolina State University College of Veterinary Medicine. Levine is certified as a specialist in orthopedics by the American Board of Physical Therapy Specialties.

Animal physical therapists are a relatively new specialty. They provide rehabilitative care to pets who have had surgery or have been injured or suffer from chronic pain. Physical therapy can speed an animal’s recovery, improve quality of life and serve as a low-cost alternative to surgery. Levine was at the forefront in the field. “I think a lot of us are animal lovers. We’re always thinking about what we can do for our pets,” Levine says. “After becoming a PT, I wondered a bit about why aren’t we actually doing more for pets.”

In 1993, several years after joining the UTC faculty, Levine was at the UT Knoxville campus for a meeting. On a lark, he decided to visit the UT College of Veterinary Medicine to see if anyone would be interested in collaborating on animal rehabilitation research. The administrator Levine talked to, Al Legendre, offered a tip about a “new guy coming here.” Three months later, Darryl Millis—now a professor of orthopedic surgery at the UT Vet School—met Levine, and a partnership was born.

“We spent probably about a year just brainstorming and learning each other’s fields a little bit better,” Millis recalls, “and then we decided this was a valid area for veterinarians to become involved with—as well as physical therapists. We put together a weekend continuing education program, and now it’s blossomed into a program that’s taught in six continents around the world.

Levine and Millis talk at least once a week. They are co-editors of multiple books, including Canine Rehabilitation and Physical Therapy and Essential Facts of Physiotherapy in Dogs and Cats, and they have taught courses together in Europe, Japan and Australia. “In the beginning, a lot of people thought we were a bit crazy,” Levine says. “We probably had ten years of laying the groundwork, speaking at local meetings and traveling out of pocket, just trying to build some momentum within the field. It started to become a bit more mainstream about 15 years ago, and now it’s a specialty college within the veterinary field.

“At the time we started, there were probably two or three clinics in the country that did rehabilitation for small animals, and there’s probably well over 300 now. We like to think we played a small part in helping create or at least build momentum in this field within veterinary practice.”

Each week, Levine does free work at Chattanooga’s Veterinary Care and Specialty Group, helping as many dogs and cats as he can. The reward for his volunteer time: “I do use a lot of cases for research. I’m always looking at that research angle,” he says. At the facility, he works closely with veterinary nurse Ashley Wheeler as they perform physical rehabilitation on animals with various ailments.

On a recent day, Levine and Wheeler worked with Macia, 10-year-old labradoodle who underwent torn cruciate ligament surgery on her left back leg two weeks before. They attended to Davey Jones, a cat born with a fracture in his back. For six years, Davey had no use of his back legs. Period. Now, thanks to underwater treadmill rehab, he’s starting to take some steps.

In another room, Levine and Wheeler worked with Magic, a 13-year-old English setter with a ruptured disc in his back. His human parents don’t want to put him through the trauma of surgery due to his age; they just want to make him comfortable. So Magic is on a big, purple exercise ball designed to minimize back pain. Levine then worked with Duke, a mountain cur hunting dog, who is rehabbing after having been hit by a car. Duke is proactively being fitted for a vest that will hold his left front leg in place for about eight weeks.

“This is Duke’s first hour with the vest on, and he isn’t happy. He has to learn to walk on three legs for now,” Levine says. “You can see the shoulder blade is kind of hanging off and pulled away from the chest wall. Luckily, he didn’t have any nerve damage, which we thought was unusual. We have a lot of interest in this case and want to write it up for one of the surgery journals. It’s an involved case in terms of management. That’s why we want to write it up.”

Toby, another Levine patient, is a dog with a herniated disc which has caused damage to his spinal cord. The window for him to undergo surgery was within 24 hours of the injury, and his humans couldn’t afford the cost—which would have been in the $7,000 range. Instead, Toby has been going to physical therapy. He now has mobility, thanks to a Walkin’ Wheels dog wheelchair. Later during Toby’s visit, he calmly sits in Levine’s arms—both wearing safety goggles—as Wheeler uses a laser over the area of the injury to try to help with tissue healing. Seeing Toby running around and happy is why Levine does what he does.

“The reality is, when you are getting to interact with dogs and cats, they are always grateful,” he says. “They don’t complain; they’re never faking an injury, there’s no workman’s compensation, they’re just trying to do the best for you that they can. And that is the fun part of it.

“There was plenty of eye-rolling and snickering in the beginning. I can remember a lecture that Dr. Millis and I gave in the mid-to-late ’90s. We showed exercises with dogs, and I can clearly remember some people just kind of chuckling. “Having it go from a somewhat strange area to an accepted part of veterinary practice has been gratifying to play a part in the emergence and spread of this field. We still have a lot to learn, but I think we’ve made a lot of progress in improving what we know about rehabilitation in animals.” 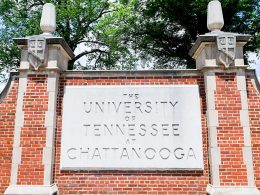 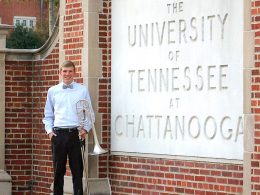 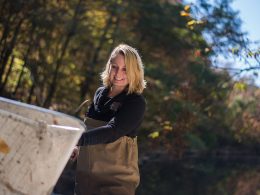 There’s a lot to learn from the diversity of animal behavior, and Professor Hope Klug and her students…
byShawn Ryan
235 views