Confusing? Not to the Figgures triplets, all communications majors at UTC

FFelicia McGhee laughs as she talks about her initial encounter with Caleb, Chauncey and Chris Figgures, triplet brothers who are now students majoring in communications at the University of Tennessee at Chattanooga. Associate professor and department head of the UTC Department of Communication, McGhee received in 2020 an introductory email from one of the triplets seeking advisement. The key word there is “one,” as in McGhee knew of only one Figgures at that time.

She remembers that the student emailing her said he was coming to UTC from Chattanooga State Community College. She knew the student wanted to pursue a career within the TV news production field.  But there was one thing she didn’t know. Yet.

“We’re meeting on Zoom and we’re talking, and then my prospective student said he was one of three. And I immediately thought, ‘What are you talking about?’” McGhee recalls. “I thought I heard wrong, so I asked him, ‘You have a twin?’ And he says, ‘No, I have two twins.’ I said, ‘I don’t believe you.’

“Then one of his brothers comes into the picture, and I’m like, ‘Oh, wow.’ And then the third brother comes into the picture. It was the funniest thing. I had to take a picture of my screen.” McGhee admits she still can get mixed up by the Figgures triplets, who arrived at UTC last fall. “But when you’re talking to one, you’re really addressing all of them,” she says.

So who are Caleb, Chauncey and Chris Figgures? Grade level has them as third-year students. They are the first known triplets to attend UTC at the same time. They live at home with their parents. And, while majoring in communications, they take some classes together.

Caleb is the youngest by one minute. Chris is the most laid-back. Chauncey is the most passionate about writing. For Black History Month in February, he wrote a daily Facebook blog celebrating African-American trailblazers. All three brothers are into social media. As a trio, they can be found on Instagram, YouTube and TikTok where one of their bits went viral last October.

The Figgures’ were the first African American triplets to be born at Hutcheson Medical Center (now CHI Memorial Hospital-Georgia) in Fort Oglethorpe, and the first African American triplets to graduate from Ridgeland High School in Rossville, Georgia. “Caleb is the tallest,” says Chris, although you can’t tell with all three sitting down. “And I’ve got a slimmer face. A lot of people get me and Chauncey mixed up because we look more alike,” Caleb adds, “but if me and Chauncey stand side-by-side, I’m taller. So that’s how we tell people how they can tell us apart.”

One pseudo-discernible difference is a birthmark Chris shows off on his thumb. “When we were in elementary school, we used to wear the same shoes, pants, shirts and jackets,” Chauncey says. “It was fascinating. Even when we were young, most people couldn’t tell us apart. We do our best to try to fool teachers just because it’s fun.”

They admit they haven’t tried pranking any of their UTC instructors, although the three were jokingly asked to show their IDs before sitting down to be interviewed for this story. After laughing, the Figgures’ purposely sat down in alphabetical order—Caleb, Chauncey, Chris—to assist with identifying who’s who. They are, of course, more than three lookalikes. While individuals in many ways, they share common bonds and collective goals, and they want to achieve them together.

“It’s very important that we pretty much experience everything together,” Chris says. “We go to church together, school together. It’s rare to see us apart. If, for example, one of us wants to go to the mall, then all three of us end up going to the mall. We have stood by each other’s side for 22 years, and we actually do have the same goals and aspirations. Once we graduate college, we want to go into broadcasting.”

UTC staffer Mike Andrews is the TV studio manager/adviser for Mocs News and a Comm 3500 instructor, a TV news production course. He worked with the trio of Figgures in spring semester. After opening the semester online due to COVID-19, Comm 3500 began meeting face-to-face twice a week on Feb. 1. The next day, Andrews had his first encounter with triplets. “I haven’t even had identical twins before, so this is a whole new zone for me,” Andrews says. “It’s particularly challenging because they have masks on, so I have to figure out who’s who. But what’s helped me is they have assigned seating. So I know, ‘OK, Chauncey’s over here in the corner, Chris is right here, Caleb’s over there.’ Eventually, I picked up on some of the cues.

Andrews says it didn’t take long for him to see how serious they are in their shared career aspirations. Immediately after meeting the Figgures, he mentioned Mocs News—a student media organization that provides content on a local cable channel—and the triplets wanted to be involved. “All three came to our next taping. We have three cameras, and they set up on all three,” Andrews continues. “We spread them out enough so that everything was fine, and it was like click, click, click. Everything went great.

“I could see them somewhere down the line having their own production company. Maybe they get their first experience at television stations, then decide which way they want to go from there.”

The Figgures said they are asked questions all the time along the lines of: “Do you think alike? Do you share the same feelings, like if one is sad, are all three sad? If one of you hurts an elbow, do the other two feel it?”

Of course, the answer is “No,” they agree, but they do share the same dream: the hope of being in front of a television camera. TV news is an exceptionally competitive field. If they all follow that career path and make it in the business, they would likely have to work in different parts of the country. “We were talking about that not too long ago,” Caleb says. “All three of us want to be on the news and we want to go into journalism. We might not end up with the same news station.”

“If we work together on the same news station, that would be fine,” Chauncey says. “But if we don’t, it’s still good. We just know wherever we go, we’re going to be OK.” For now, Caleb, Chauncey and Chris want to share experiences for as long as they can.

If all goes right in their world, a time will come when the Figgures triplets can take turns pranking Chattanooga television viewers watching local newscasts. “We were thinking about this,” Caleb Figgures says with a gleam in his eye, “Wouldn’t it be something if Chris went into news at Channel 9 and Chauncey at Channel 12 and me at Channel 3? Because that’s what we want to do.

Triplets can share the same dream, right? “What we want to accomplish in life is a great goal,” Caleb says, “and we want to do it together.” 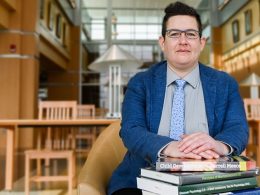 Since textbook prices can come with a free case of sticker shock, Rachel Fleming is committed to making…
bySarah Joyner
540 views
1 share
1
0
0 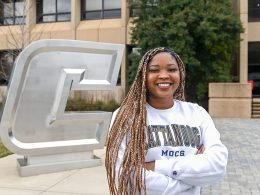 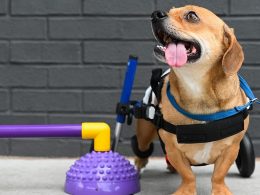 UTC Chair of Excellence Physical Therapist David Levine is a pioneer in the field of animal physical therapy.  by…
byChuck Wasserstrom
1.4K views