You are here: Home / CECS / From Oil Fields to Scholarship 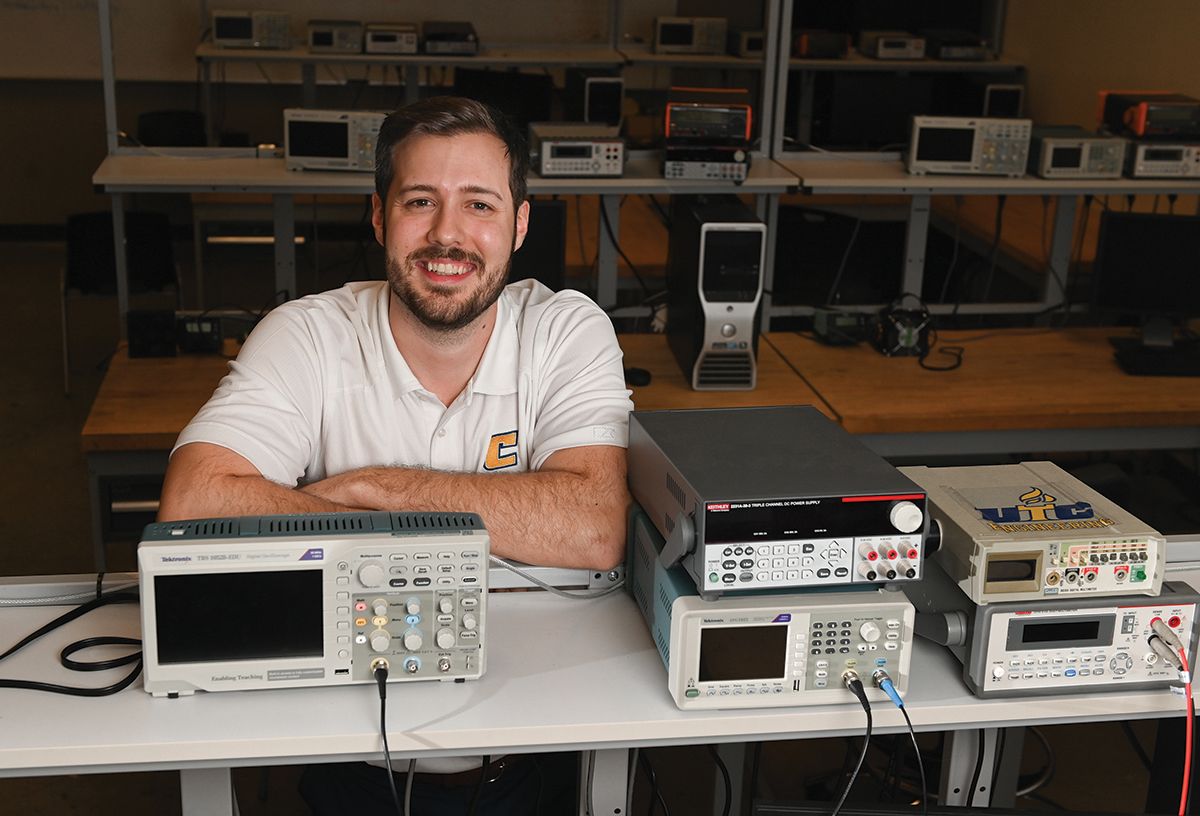 Mark Merritt could only laugh when asked, “How did you wind up here?”

“Yeah, it’s definitely a story,” he says with a smile.

It has been quite a journey. Merritt is on a path to graduate from the University of Tennessee at Chattanooga in May, thanks in part to being a UTC ASSETS scholarship recipient (more on that later). The electrical engineering major has a 3.5 grade-point average and aspires to work in renewable energy. To understand where he wants to go means you must know where he’s been, and for that, you need a road map.

Merritt grew up in Jacksonville, Florida, and moved with his family to the small town of Owego, New York, when he was 14 years old. He thrived athletically at Owego High School, where he hatched a grand plan. “I was going to major in basketball. I did well enough to play collegiately at a small school south of Buffalo.”

Merritt went to the State University of New York at Fredonia to play basketball and enjoy college life. He didn’t focus on academics; shockingly enough, that didn’t work. After his freshman campaign, “It was no surprise when the coach told me, ‘Hey, you don’t need to come back,’” he recalls.

With college an afterthought, Merritt decided he was ready for the real world. He was 19, and he wanted to make “grown-man money,” so he joined his father and brothers in heading to North Dakota to work in the oil fields. “I learned a lot about myself and what I could do,” he says. “It was my first grownup job, and I remember this one day when it was minus 60 degrees; it didn’t slow people down; they go to work. Being out there, working in the oil fields in that kind of environment instilled a work ethic in me that I didn’t have before.”

He worked in the oil fields for three-plus years, but a changing landscape led to his receiving smaller and smaller paychecks. At the same time, he had moved in with a buddy of his from his Florida days. His friend, Zach Olson, had also moved from Jacksonville as a teenager, relocating to the Chattanooga area. As the take-home pay decreased, “I remember telling Zach, ‘Man, I’m thinking about going back to school. I don’t know what I want to do,’” Merritt says. “He told me, ‘You should check out Chattanooga.’

“At 23, I finally decided to go back to school and take it seriously. I had taken some (general education) classes at Dickinson State University in North Dakota. I also took three 600-question aptitude tests to decide what I should do for a career. Engineering was in the top three for each one, and I chose electrical engineering because I wanted to get into renewables. I saw the environmental impact that oil can have, so I wanted to get into the renewable space.”

Dickinson State didn’t offer engineering courses, so Merritt followed his friend’s advice and migrated to Chattanooga. He initially landed at Chattanooga State Community College, getting his GPA high enough to transfer to UTC.

When Merritt arrived on campus for the 2018-2019 school year, he was not receiving financial assistance of any kind. That first semester, he learned of the UTC ASSETS Scholars Program, which provides scholarship awards of up to $7,400 annually to facilitate transfer-degree completion for students majoring in civil engineering, chemical engineering, electrical engineering and mechanical engineering.

The problem was, he didn’t know anything about the program until after he was already at UTC. “When I learned of the program and found out that, with my Chattanooga State GPA, I would have gotten it if I applied, it crushed me,” Merritt says. “I remember the day I found out, and I was absolutely crushed. I was paying for school out of pocket; I would go to class during the day, work at night, study all night and then repeat. Rinse and repeat.”

The person who tipped off Merritt about the ASSETS Scholars Program was Karen Lomen, an administrative assistant in the Department of Civil and Chemical Engineering. Although there was no guarantee that it would do him any good, he made sure to find her every day to say “Hi” and stay on her radar.

Near the end of the fall 2018 semester, Lomen learned that one of the students in the program was not going to return. She reached out to Merritt to let him know about the opening.

“She told me that I would be a good candidate to receive his scholarship money,” Merritt says. “When I found out I would be getting it, I cried. I really cried. It just takes a massive load off your mind. You’re able to focus more on your studies and relax. I was able to become a (College of Engineering and Computer Science) Student Ambassador. I don’t even know how I can express how much it helped.

“I was able to work less so I could do research. Last summer, I was part of an awesome program that allowed me to go to Spain and do undergraduate international research, focusing on renewables and electric vehicles. If I didn’t have the scholarship, I would have worked all summer to save money to go to school. The scholarship made it possible for me to pursue what I got into electrical engineering for in the first place.”

The financial assistance also eased the burden on Merritt’s family. “They were very supportive when I came to Chattanooga,” he says, “and the scholarship assisted my family, too. They were helping me out financially that first semester.”

A long-and-winding road brought Merritt here. Now, the 27-year-old is starting to see a cap and gown in the not-too-distant future. “Oh, yeah, it’s insane,” he says. “After all the places I’ve been, I can’t believe I’ve almost made it.”