UTC’s Department of History and Africana Studies program are pleased to welcome 2016 National Book Award finalist Heather Ann Thompson of the University of Michigan to deliver the 4th annual Africana Studies Lecture on Thursday, March 23, at 5:30pm in Derthick Hall 201.

Free and open to the public, Professor Thompson’s talk will focus on her critically acclaimed book Blood in the Water, “the first definitive history of the infamous 1971 Attica Prison Uprising, the state’s violent response, and the victims’ decades-long quest for justice. … Published to coincide with the forty-fifth anniversary of the uprising, Blood in the Water finally reveals the full story of what really happened at Attica and will completely reshape our understanding of this historic event.”

Questions may be directed to lecture co-organizer Mike Thompson (no relation to the speaker) at Michael-D-Thompson@utc.edu or 423-425-4565. Attendees in need of accommodations are invited to contact UTC’s Disability Resource Center at 423-425-4006.

“Heather Ann Thompson is an award-winning historian at the University of Michigan. She has written on the history of mass incarceration, as well as its current impact, for The New York Times, The Atlantic, Salon, Dissent, New Labor Forum, and The Huffington Post. She served on a National Academy of Sciences blue-ribbon panel that studied the causes and consequences of mass incarceration in the United States and has given Congressional staff briefings on this subject. Thompson is also the author of Whose Detroit?: Politics, Labor, and Race, in a Modern American City and the editor of Speaking Out: Activism and Protest in the 1960s and 1970s.”

“On September 9, 1971, nearly 1,300 prisoners took over the Attica Correctional Facility in upstate New York to protest years of mistreatment. Holding guards and civilian employees hostage, the prisoners negotiated with officials for improved conditions during the four long days and nights that followed. On September 13, the state abruptly sent hundreds of heavily armed troopers and correction officers to retake the prison by force. Their gunfire killed thirty-nine men—hostages as well as prisoners—and severely wounded more than one hundred others. In the ensuing hours, weeks, and months, troopers and officers brutally retaliated against the prisoners. And, ultimately, New York State authorities prosecuted only the prisoners, never once bringing charges against the officials involved in the retaking and its aftermath and neglecting to provide support to the survivors and the families of the men who had been killed. Drawing from more than a decade of extensive research, historian Heather Ann Thompson sheds new light on every aspect of the uprising and its legacy, giving voice to all those who took part in this forty-five-year fight for justice: prisoners, former hostages, families of the victims, lawyers and judges, and state officials and members of law enforcement. Blood in the Water is the searing and indelible account of one of the most important civil rights stories of the last century.” 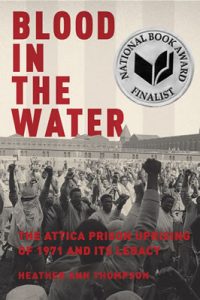 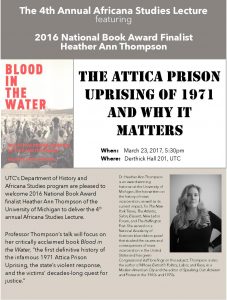