This Veteran’s Day, learn how the Blue and Gray Barbecue at Crawfish Springs launched the Civil War preservation and reconciliation movements.

Free and open to the public

The Department of History is pleased to co-sponsor a free Civil War Era lecture on Monday, November 11th at 7:00pm at the IMAX Theater. The speaker, Dr. Timothy B. Smith, is a Lecturer in the History Department at UT Martin, and is the author of A Chickamauga Memorial: The Establishment of America’s First Civil War National Military Park (Knoxville: University of Tennessee Press, 2009) and over a dozen other books on Civil War history, memory, and battlefield preservation. 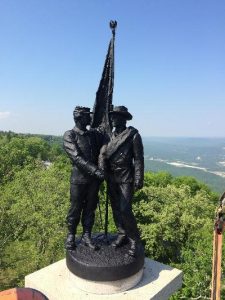 The lecture, entitled “Chickamauga Battlefield and the Civil War Reconciliation Movement,” is the finale of National Park Partners’ 14th annual Moccasin Bend Lecture Series, and will include comments from Jim Ogden, the Historian at Chickamauga and Chattanooga National Military Park.

The two will lead a lively discussion of the famous “Blue and Gray Barbecue” at Crawfish Springs in 1889, leading to the creation of the country’s first National Military Park at Chickamauga in 1890 and inspiring the preservation and reconciliation movements that followed.

This lecture is presented in partnership with the Chattanooga Area Historical Association and the University of Tennessee at Chattanooga Department of History.

Veterans and active-duty military in attendance will receive a complimentary set of postcards featuring all six units of Chickamauga and Chattanooga National Military Park, and will be entered into a drawing to receive a beautifully framed poster, courtesy of Art Creations in memory of U.S. Army veteran and longtime friend of CCNMP, Tony Mines, who passed away in October.

Tagged with: Events Why History Matters