Public Lecture on the Battle of Okinawa Wed., Jan. 15

University Center Chattanooga A, B & C

Dr. Kirsten Ziomek of Adelphi University will give a public lecture on the Battle of Okinawa from WWII on campus next Wednesday, January 15, 2020. Dr. Ziomek will focus on the experiences of Japan’s colonial subjects during the Battle of Okinawa, the bloodiest battle in the Pacific theater which resulted in the largest loss of civilian lives. She will discuss the experiences of two groups of indigenous people during the battle– that of Ainu soldiers and Okinawan soldiers and civilians.

Dr. Kirsten Ziomek is an Associate Professor of History and the Co-Director of Asian Studies at Adelphi University.  She specializes in the Japanese empire, imperialism, colonial subjects, indigenous people, visual culture, the Asia-Pacific War, World War II, gendered mobility, and cultural history.  She is the author of Lost Histories: Recovering the Lives of Japan’s Colonial Peoples (Harvard University Asia Center, 2019).

Based on her recent monograph, Lost Histories: Recovering the Lives of Japan’s Colonial Peoples (Harvard University Asia Center, 2019), Dr. Ziomek’s talk will highlight some of the methodological techniques of telling the histories of people who are said to have no history, through the use of visual imagery, material objects and oral history along with records from the colonial archives to uncover the life histories of Japan’s colonial subjects. She reveals that the battle lines were not just drawn between the Americans versus the Japanese but rather involved the Japanese turning against the Okinawans as well as the Okinawans turning on each other. She will introduce her new research on the hunt for the enemy that led to atrocities that have been long overlooked by positing the Battle of Okinawa as a clash between two imperial powers. This talk will reveal the complex ethno-racial relationships that undergirded Japan’s imperial forces, which at times strained to a breaking point and toward nihilism as soldiers and civilians descended into extreme violence. 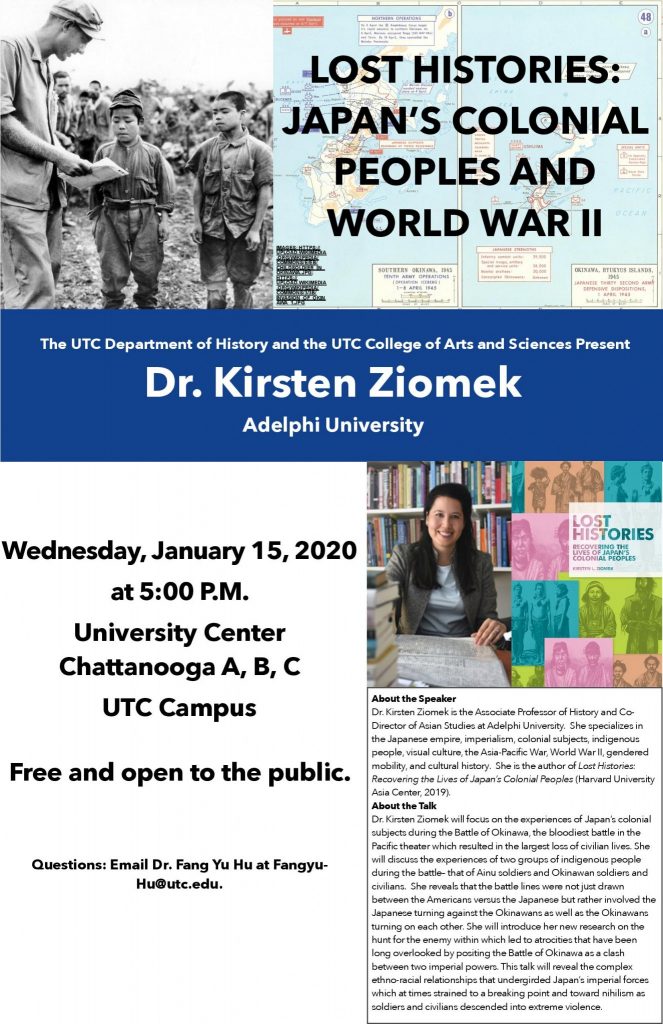 Tagged with: Events What History Teaches You Why History Matters