Event on 10/14 – BLM and Protest Movements: A Panel Discussion 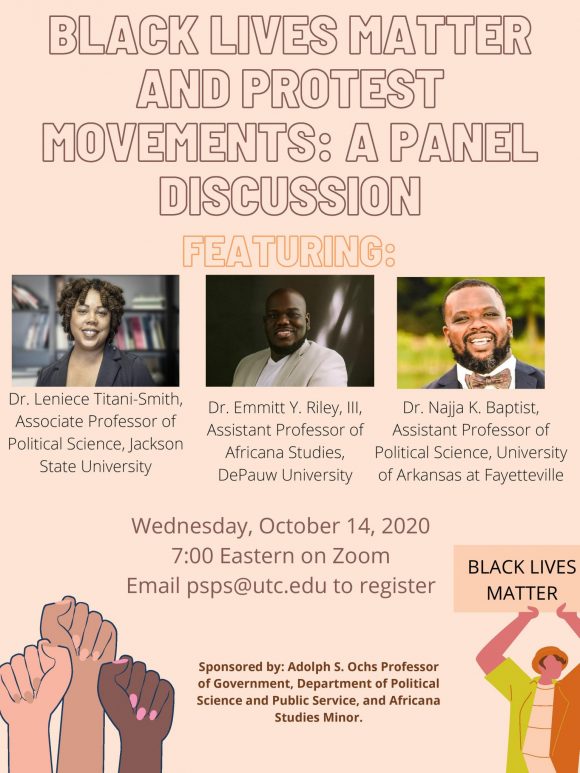 Come meet a group of political scientists with expertise in Black Politics and who approach the question of social justice through a variety of lenses: culture, political behavior, and political theory. The discussion should be robust, they know each other so the dialogue should be exciting, and there will be lots of opportunities to ask questions.

Dr. Baptist is Assistant Professor of Political Science at the University of Arkansas Fayetteville. He earned his doctorate in political science from Howard University and his work has appeared in numerous journals, such as National Political Science Review, Journal of Race and Ethnicity, Politics, Groups, and Identities, and other outlets. Dr. Baptist’s work is primarily focused on Black politics, social movements, culture, political behavior, public opinion, and mass media in the United States.

Professor Riley is Assistant Professor and Director of the Africana Studies program at DePauw University in Greencastle, Indiana. He earned his PhD in political science from the University of Mississippi. The National Conference of Black Political Scientists has named him the 2018 Anna Julia Cooper Teacher of the Year and in 2020, bestowed on him the Fannie Lou Hamer Award for Service. Dr. Riley has teaching and research interests in race politics, Black politics, legislative-process, political representation, racial resentment, and Africana studies. His research has appeared in journals such as the Journal of Black Studies, Journal of Race & Policy, and the National Review of Black Politics.

Sponsored by: The Adolph S. Ochs Professor of Government, the Department of Political Science and Public Service, the Africana Studies minor, and the Office of Multicultural Affairs.