Check out some recent news from the UTC Department of History.

The Chancellor’s 2021 Annual Report to the UC Foundation included a feature on the establishment of the Linnemann Memorial Endowment in History, which supports the History Department’s Africana Studies Program.  Linnemann was a long-time faculty member in the department, and the endowment was established by his friend and fellow historian Bill Epstein to ensure that Linnemann’s distinguished legacy lives on.  Read more about the endowment on page 14 of the annual report here. 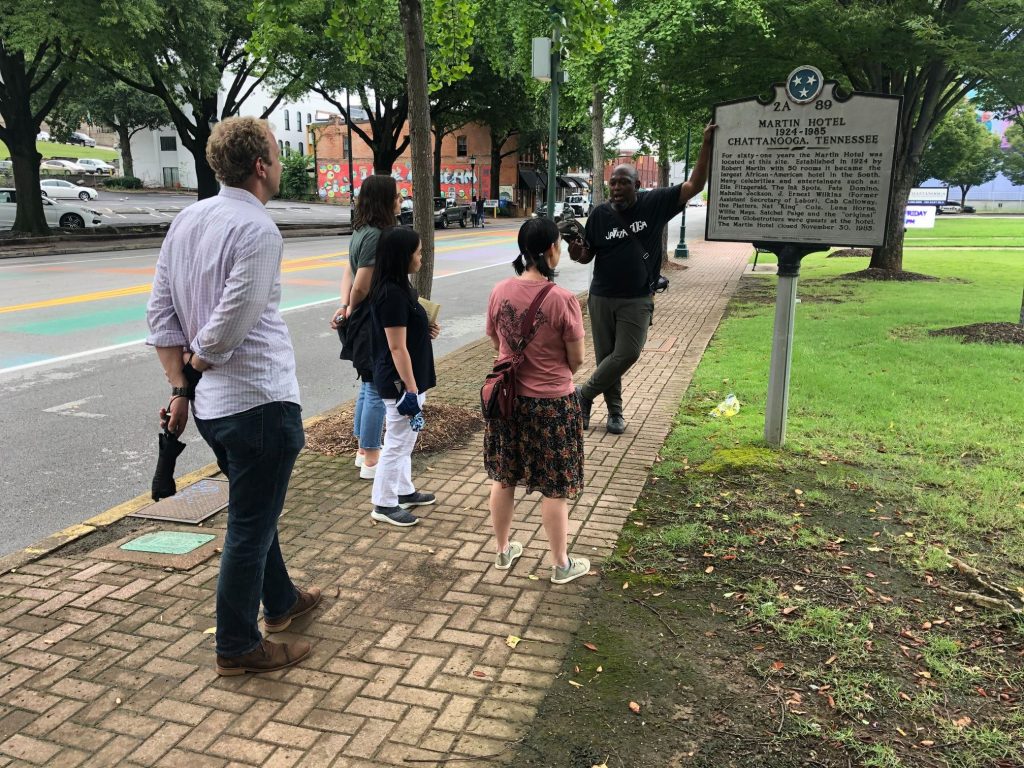 The History Department continues to play an active role in the Chattanooga community, including through its partnership with RISE Chattanooga and its contributions to the Ed Johnson Memorial. RISE Executive Director Shane Morrow led a UTC Welcome Week walking tour organized by the department in August.  The story of Ed Johnson and the project to establish a memorial in his honor were the subject of an article in The New York Times in August 2021.

The History Department is excited to welcome two new faculty.

Dr. Jessica Arnett’s research focuses on Indigenous sovereignty and land movements in Alaska. She is interested in the legal relationship between Alaska Natives and the U.S. federal government and how that relationship reflects the shift from continental Indian policy, typically characterized by the nation-to-nation negotiating status of tribal nations, to non-contiguous territorial policies that denied Indigenous sovereignty and nationhood status. Her current book project, Categories of Empire: Native Sovereignty and Settler Imperialism in Alaska, examines the ways Alaska’s non-contiguity led federal officials to categorize Alaska Natives as racially distinct from Indigenous people of the continent and traces the ways these racial categories became legal categories over time, a process that both facilitated U.S. imperial ambitions and informed Alaska Native political strategies throughout the 19th and 20th centuries.

Kathryn Taylor (Ph.D., The University of Pennsylvania) is a historian of early modern Italy and the Mediterranean, with a focus on the history of cultural mediation, ethnography, and religious conversion. They are particularly interested in how people in the early modern Mediterranean thought about human diversity and how they imagined religious, ethnic, and cultural difference over time. Their articles have appeared in The Journal of Early Modern History, The Sixteenth Century Journal, and The History of European Ideas. Dr. Taylor is currently working on a book titled Ordering Customs, which examines the production and circulation of ethnographic knowledge in sixteenth- and early seventeenth-century Venice. Ordering Customs will be published as part of the University of Delaware Press’s series The Early Modern Exchange. The book shows how an interest in customs, rituals, and ways of life not only became central in how Venetians sought to apprehend other peoples, it also had a very real impact at the level of policy, shaping how the Venetian state governed minority populations in the city and its empire. Their next book project, Conversion and the Cosmopolitan Order in the Venetian Mediterranean, is a history of religious conversion in Venice’s Mediterranean empire.