A Science without a Nation:

Please join us on Thursday, October 7, at 5:30 p.m. for this semester’s installment of the Latin American Dialogues Speaker Series. We’re thrilled to welcome Dr. Joshua Savala, Assistant Professor of History at Rollins College  to discuss his research on social responses to transnational epidemics. 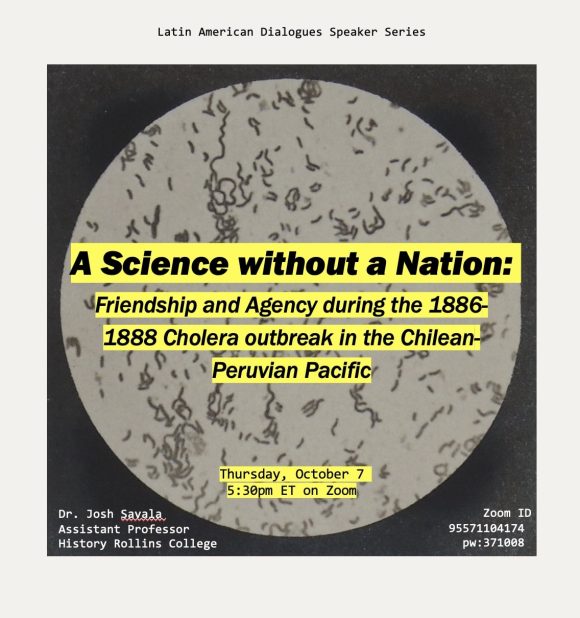 Talk Title: “A Science without a Nation: Friendship and Agency during the 1886-1888 Cholera outbreak in the Chilean-Peruvian Pacific”

Abstract: News about a breakout of cholera reached Chilean officials in late 1886. Soon thereafter the disease made its way across the Andes from Argentina and began a devastating course into 1888. Meanwhile, authorities in Peru worried about cholera heading north on ships. This fear helped spur international cooperation between authorities in both countries. Their cooperation, however, has often been overlooked for one key reason: Chile and Peru had just been on opposite sides of a brutal war. The War of the Pacific (1879-1883) has cast a long shadow, reinforcing the assumption that conflict was the natural state of affairs. Cholera—fear of it and the incomplete knowledge of its life—pushed both states to work together despite nationalist divisions. The Peruvian state even sent one of its young doctors, David Matto, to study cholera in Chile alongside Chilean researchers. Through a reading of diplomatic correspondence, local archival materials, medical theses and periodicals, I argue that cholera linked both states in cooperative relationships and built affective relationships that were established in research laboratories and in the field, creating transnational medical circles that could not be contained by nationalist chauvinism.

Additionally, the UTC library has prepared an excellent collection of e-books and resources related to this theme which is available here: https://utc.alma.exlibrisgroup.com/discovery/collectionDiscovery?vid=01UTC_INST:01UTC&collectionId=81295969850003991

Don’t hesitate to reach out to the LADSS organizer Edward Brudney (edward-brudney@utc.edu) with questions.