The UTC Department of History, in collaboration with the Department of Social, Cultural, and Justice Studies and the UTC College of Arts and Sciences, held a Paleo Skills Workshop on October 16.

Read the UTC News Release about the workshop here and below.

This story was written by Chuck Wasserstrom and originally appeared as a UTC News Release. 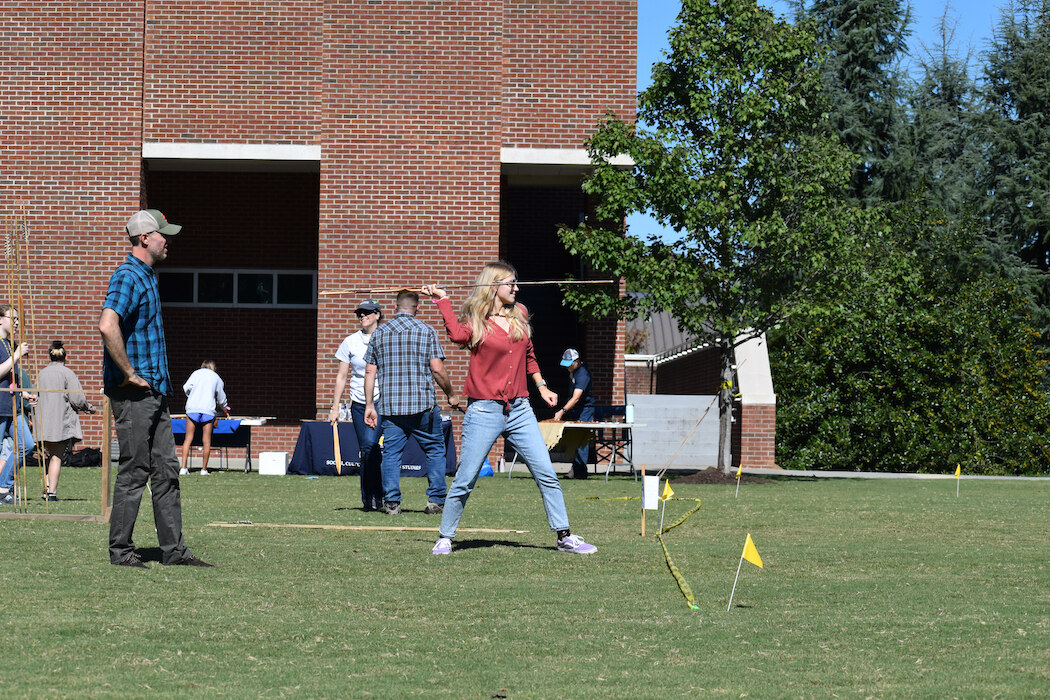 UTC student Abbey Fowler tests her atlatl skills. The atlatl is a spear-like weapon used by the Aztecs.

It was a typical Saturday afternoon on Chamberlain Field, with University of Tennessee at Chattanooga students tossing around the old atlatl and using fire bow kits to try to generate fire.

And, of course, observing flint knapping in action.

On a recent fall afternoon, atlatls, fire bow kits and flint knapping were on display when UTC Department of History Lecturer Carey McCormack and Brooke Persons, an anthropologist and director of the Jeffrey L. Brown Institute of Archeology in the Department of Social, Cultural and Justice Studies, teamed up to host a Paleolithic skills learning workshop for students.

The hands-on activity, which had nearly 100 student participants and faculty volunteers, allowed students to experiment with archaic weaponry and tools to better understand the evolution of human technology around the world.

“Carey, the historian, sees the historic records side of the picture,” Persons said. “In anthropology, we see the other side of it from the archeological record.

“Archeologists are good at studying material culture and doing experimental archeology, which is learning by doing and trying. It’s a very different side of research, something that students don’t get to see a lot of. This is a different type of hands-on experiential learning that gets students engaged and brings it all to life.”

While the Paleo-skills workshop is relatively new to UTC, it’s not to McCormack; she has been overseeing similar demonstrations for more than 10 years in other locations.

“Everything went even better than planned because we had faculty volunteers on all the stations,” McCormack said. “The event teaches students all kinds of things, such as the ingenuity of early humans and what turned us into apex predators.”

There wasn’t a lot of lecturing, other than an archery range safety talk, McCormick said, “so that there are no accidents. Everyone agrees not to stab each other with anything; they just go from station to station and experiment.”

There were instructional stations featuring slings and the atlatl. Students were shown how to use the atlatl, a tool that resembles a spear, by throwing it at targets.

“It takes a really long time to actually make a fire,” McCormack said, “but if they can at least get it to smoke, it gives them a great sense of accomplishment.”

A flint-knapping station demonstrated the production of traditional stone tools.

“Whenever you think about arrowheads or projectile points or the materials that people would have historically put on the end of a spear in some way, flint knapping is the technology that creates that,” Persons explained.

The process takes a raw stone and chips away at it until it becomes a tool “that can then be used for cutting or for whatever purpose,” she said.

The final hour of the workshop was dedicated to the Moche toss, a game based on the a Peruvian civilization that flourished between 100 to 700 AD. Similar to the game of badminton, it uses a type of shuttlecock that is thrown upwards.

“There are images of them on old ceramics using the atlatl to snatch shuttlecocks out of the air,” McCormack said. “We have to try to use our atlatl darts to snatch it out of the air.”

McCormack said her husband, artist Chris Henry, makes the tools and even created Paleolithic weapons for television, movies and museums when they lived in California.

“A lot of History Channel shows bought his stuff,” she said, “and there is a museum in Nevada that bought some replications. There are also people in Texas that have bought his atlatls and darts as functional tools for hunting wild boar.”