The Fall 2021 issue of Method, the magazine of the UTC College of Arts and Sciences, featured a story on the History Department’s internship program.

Read the story below. 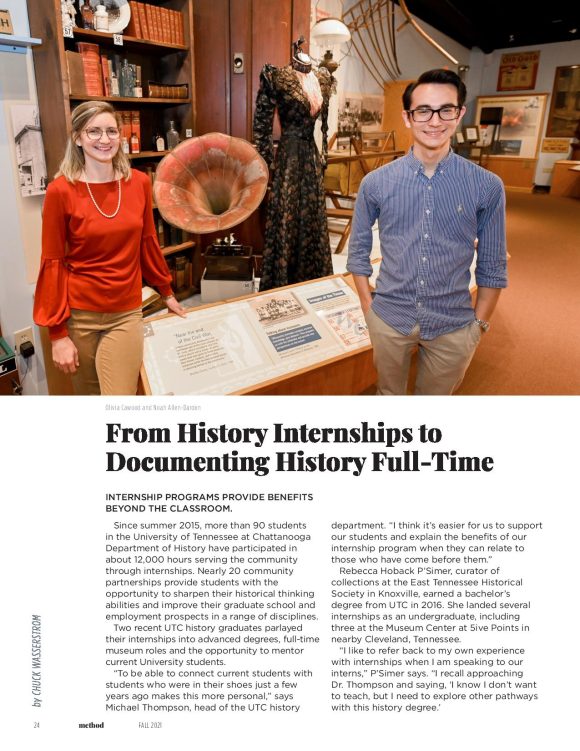 Since summer 2015, more than 90 students in the University of Tennessee at Chattanooga Department of History have participated in about 12,000 hours serving the community through internships. Nearly 20 community partnerships provide students with the opportunity to sharpen their historical thinking abilities and improve their graduate school and employment prospects in a range of disciplines.

“To be able to connect current students with students who were in their shoes just a few years ago makes this more personal,” says Michael Thompson, head of the UTC history department. “I think it’s easier for us to support our students and explain the benefits of our internship program when they can relate to those who have come before them.”

Rebecca Hoback P’Simer, curator of collections at the East Tennessee Historical Society in Knoxville, earned a bachelor’s degree from UTC in 2016. She landed several internships as an undergraduate, including three at the Museum Center at 5ive Points in nearby Cleveland, Tennessee.

“I like to refer back to my own experience with internships when I am speaking to our interns,” P’Simer says. “I recall approaching Dr. Thompson and saying, ‘I know I don’t want to teach, but I need to explore other pathways with this history degree.’

“He knew of the Museum Center at 5ive Points and got me that internship, and that is what led me into the museum field. I immediately just fell in love with it. After that internship, I took others that were out of my comfort zone.”

Among those internships was spending the summer of 2016 with the Buffalo Bill Center of the West-Cody Firearms Museum and Firearms Record Office in Wyoming. That internship aided in her acceptance into the University of Memphis’ Master of Arts in History program. She earned an advanced degree in 2019, just a few months after starting her present job. She now enjoys sharing her experiences in building a career when talking to interns from UTC and other colleges.

“I don’t want to say it’s come full circle because I know I’m very early in my career,” she says, “but it just feels great to provide that side of it. I have mentors that I look up to that have helped me along the way, and it’s such a powerful thing to keep up with everybody.

“I tell interns that an important aspect of this field is networking. I also tell them that it’s so important not to burn bridges because so many people know so many other people. It’s just crazy how everybody is so connected within the field.” 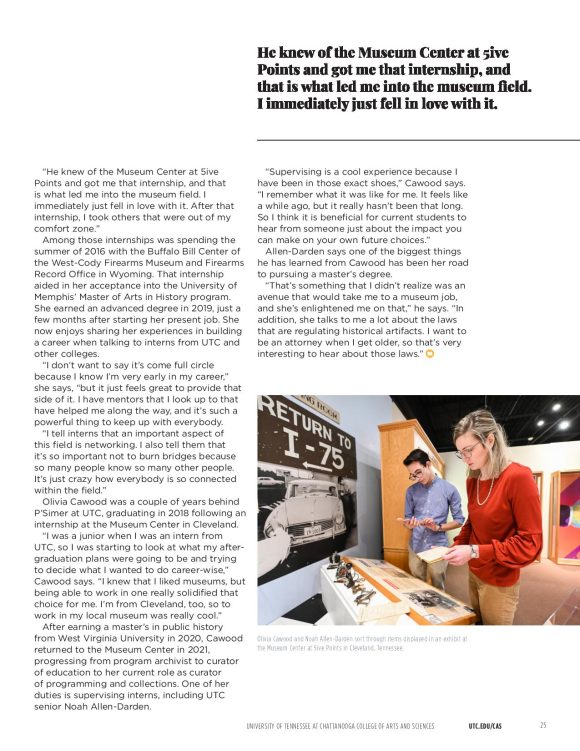 Olivia Cawood was a couple of years behind P’Simer at UTC, graduating in 2018 following an internship at the Museum Center in Cleveland.

“I was a junior when I was an intern from UTC, so I was starting to look at what my after- graduation plans were going to be and trying to decide what I wanted to do career-wise,” Cawood says. “I knew that I liked museums, but being able to work in one really solidified that choice for me. I’m from Cleveland, too, so to work in my local museum was really cool.”

After earning a master’s in public history from West Virginia University in 2020, Cawood returned to the Museum Center in 2021, progressing from program archivist to curator of education to her current role as curator of programming and collections. One of her duties is supervising interns, including UTC senior Noah Allen-Darden.

“Supervising is a cool experience because I have been in those exact shoes,” Cawood says. “I remember what it was like for me. It feels like a while ago, but it really hasn’t been that long. So I think it is beneficial for current students to hear from someone just about the impact you can make on your own future choices.”

Allen-Darden says one of the biggest things he has learned from Cawood has been her road to pursuing a master’s degree.

“That’s something that I didn’t realize was an avenue that would take me to a museum job, and she’s enlightened me on that,” he says. “In addition, she talks to me a lot about the laws that are regulating historical artifacts. I want to be an attorney when I get older, so that’s very interesting to hear about those laws.”

Tagged with: Internship News Student News What History Teaches You What You Can Do with a History Degree