A Conversation about Black Cuisine

On Thursday, March 31 at 5:30 p.m., the UTC History Department and Africana Studies Program welcome special guests Adrian Miller, James Beard Award winner, and Kenyatta Ashford, Chef at Chattanooga’s Neutral Ground, for A Conversation about Black Cuisine. This will be a conversation-style event moderated by Nicole Brown, a community leader and award-winning producer. 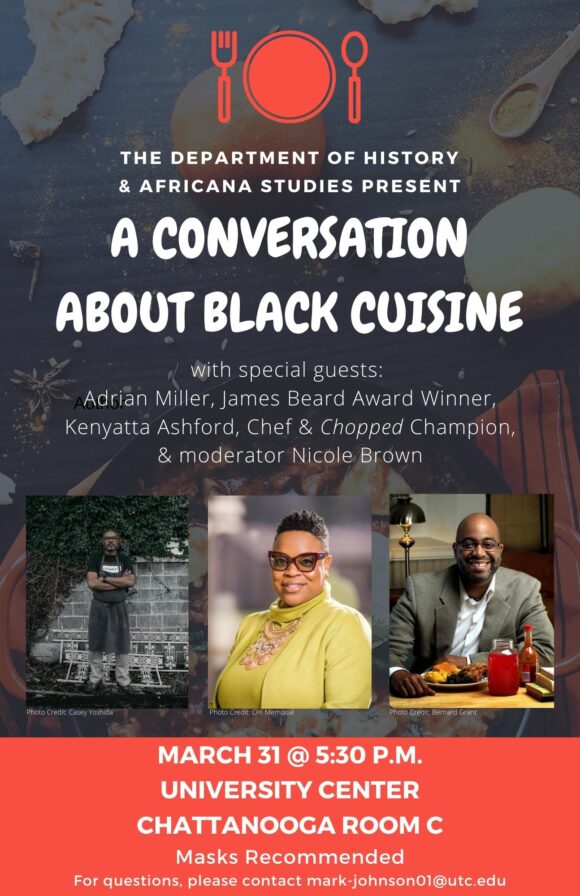 Adrian received an A.B in International Relations from Stanford University in 1991, and a J.D. from the Georgetown University Law Center in 1995. From 1999 to 2001, Adrian served as a special assistant to President Bill Clinton with his Initiative for One America –the first free-standing office in the White House to address issues of racial, religious and ethnic reconciliation. Adrian went on to serve as a senior policy analyst for Colorado Governor Bill Ritter Jr. From 2004 to 2010, he served on the board for the Southern Foodways Alliance. In June 2019, Adrian lectured in the Masters of Gastronomy program at the Università di Scienze Gastronomiche (nicknamed the “Slow Food University”) in Pollenzo, Italy. He is currently the executive director of the Colorado Council of Churches and, as such, is the first African American, and the first layperson, to hold that position.

Miller’s first book, Soul Food: The Surprising Story of an American Cuisine, One Plate at a Time won the James Beard Foundation Award for Scholarship and Reference in 2014. His second book, The President’s Kitchen Cabinet: The Story of the African Americans Who Have Fed Our First Families, From the Washingtons to the Obamas was published on President’s Day 2017. It was a finalist for a 2018 NAACP Image Award for “Outstanding Literary Work –Non-Fiction,” and the 2018 Colorado Book Award for History. Adrian’s third book, Black Smoke: African Americans and the United States of Barbecue, was published April 27, 2021.

Kenyatta Ashford recently won Food Network’s Chopped and he and his restaurant Neutral Ground have been featured in Conde Nast, Eater, Travel Noire, the New York Times and more.

Raised in the Algiers neighborhood of New Orleans as one of seven siblings, Ashford found his love for food at a young age over lingering family meals hosted by his mother Sharon and his Uncle Walter. Never one to follow a normal path, Ashford became a high school teacher after playing basketball at Lee University. After building a robust teaching and coaching career, Kenyatta’s summer sessions spent helping in a catering kitchen awoke his childhood passion for the tastes of home.

Lead by the memories and the of tastes of his childhood and a constant commitment to excellence, Ashford was accepted to the Culinary Institute of American where he built technical expertise and interests in the food ways of his ancestry. After continued study in top tier culinary institutions in New York, Rhode Island, and Louisiana, he went on to study scaled preparation techniques in the hospitality industry through the outbreak of the COVID-19 pandemic.

Like much of the hospitality industry, Kenyatta’s role was furloughed early during the pandemic leaving him with a robust set of skills and a family to help feed. Within weeks, he created the concept for Neutral Ground and set-up shop in Chattanooga’s Proof Incubator. The name Neutral Ground is an homage to the strip of land between neighborhoods in New Orleans that finds its origin in being the trade and gathering area across identities. Ashford carries this spirit into all of his work of creating common spaces where people can come together across backgrounds and beliefs.

The menu at Neutral Ground is a product of Ashford’s “afro-creole” identity and vision where he’s constantly reflecting on and reimagining cuisine that reaches all the way back to his ancestors who were enslaved in West Africa and brought to the Americas and journeys through the rich and often over-simplified culinary traditions of his hometown New Orleans. Dishes on the menu range from bean and rice dishes with strong African influences to interpretations of working class staples from New Orleans like po’boys and yakamein.

Nicole Brown is the Manager of Community Benefits and Diversity at CHI Memorial. Her role supports diversity initiatives, health disparities and national/local health projects.  Brown is thrilled to serve on the CHI Memorial/Morehouse School of Medicine Implementation Team. This is a $100 million, 10 year partnership led by CommonSpirit Health.

She worked for Brewer Broadcasting as on-air personality, Khole Brown, for fifteen years. Brown is a Yellow Rose Broadcasting recipient by the National Association of Negro Business and Professional Women’s Club.  She served in various roles at the University of Tennessee at Chattanooga for twenty five years. While at UTC, Brown helped launch the Office of Equity and Diversity, served as adjunct faculty and inaugural advisor in the Department of Communication. In 2009, she created The Perch (UTC’s student run, web-based radio station). Brown received the 2017 Public Service Award from The University of Tennessee System and the 2012 Horace J. Traylor Diversity Leadership Award at UTC. The Miss Black Tennessee USA Pageant presented her with the Sarah J. Woodson-Early Award in 2012.

This event coincides with Dr. Mark A. Johnson’s Food and Southern History class. Johnson, a lecturer in the Department of History, has written books on barbecue and race relations. Currently, he’s working on a cultural history of bacon. In class, students will have read Miller’s Soul Food. Additionally, a group of five students have agreed to read Miller’s newest book, Black Smoke. They will have an opportunity to meet with Miller during their class time for a small-group discussion of his work.