You are here: Home / Alumni / A Special Gift of Scholarship 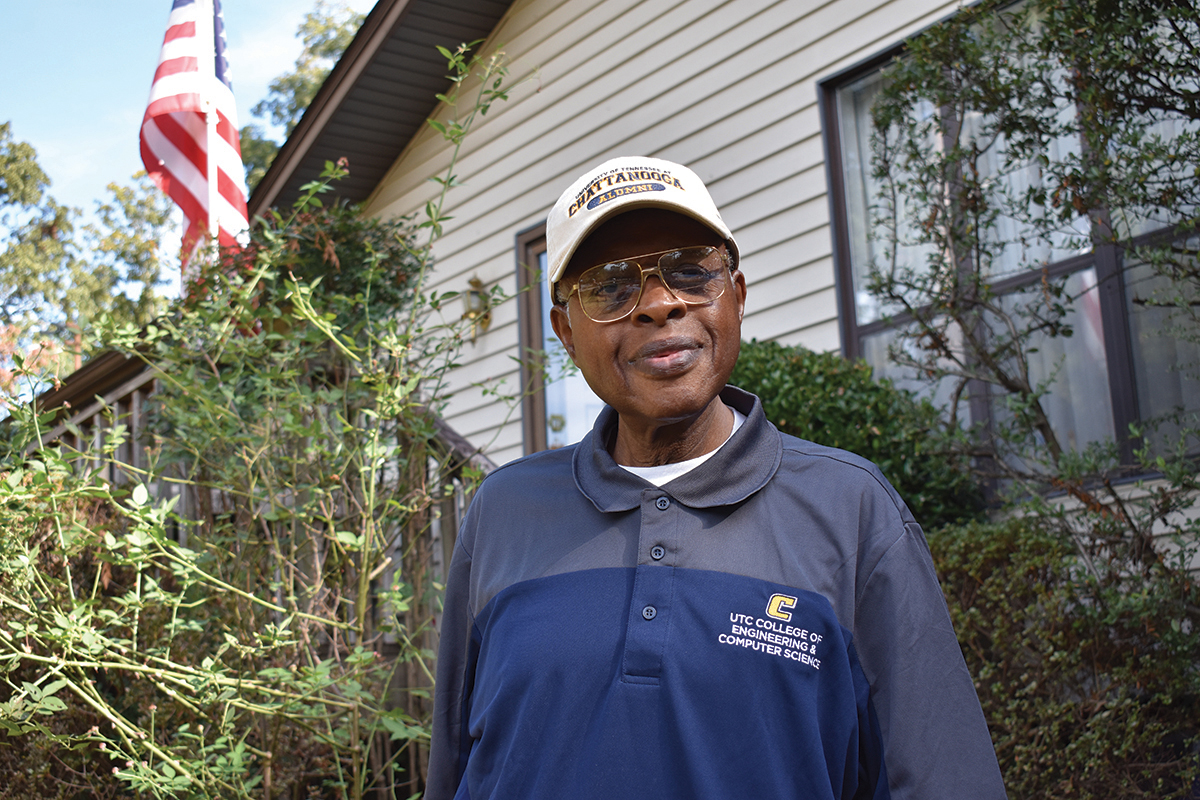 As Hollis Wooten speaks, you understand right away that his words are more than mere discussion points. He chooses his words thoughtfully and carefully, and they are filled with real meaning.

He insists that the story is not about him. It’s about them, he tells you, but to share their story, you must understand his story. Today Wooten, who graduated at age 36 from the University of Tennessee at Chattanooga, is 80 years old and at a reflective time in life. He talks about his mother, his father and his two late wives. His narrative is about making sure their legacies live on long after he does. You see, Wooten was bound and determined to get a college degree, no matter how long it took. And he did it at a time when work/school balance wasn’t something that people routinely did.

He was born in 1939, the second of six children to Lawson and Lila Mae Wooten. Lawson had a third-grade education, and it didn’t sit right with him. “When he was young, it was about finding a job somewhere,” Wooten recalls, “but my dad told me, ‘Now, you need to know something to land the right job. It’s important to get an education.’” Lila Mae had an 11th-grade education and took a disciplinarian approach when it came to her children’s studies. There were no excuses, you didn’t miss school. Getting a C wasn’t good enough; As were the expectation.

“My mother always told us, ‘If a job has once begun, never leave it ’til it’s done. Be that labor great or small, do it well or not at all,’” Wooten says. “She taught us that from the time we knew how to talk.” Since no one in his family had ever gone the university route, Wooten’s parents were resolute that the trend was going to stop.

Wooten made an initial attempt to attend college in 1959 after he came up with enough money to spend one academic quarter at Tennessee State University, but he couldn’t find a job that paid enough for him to continue to work and go to school. It took him 11 years to find the money to try again. Around the same time as his first college try, Wooten met Elserean Phelps. She was his job coach, his supporter, his soulmate. She was with him every step of the way as he pursued his college dream; they dated from 1959 until finally tying the knot in 1976.

With Elserean’s full support, Hollis took home-study courses, learned to repair heaters and air conditioners, went to Chicago for refrigeration and appliance repair training and did all sorts of odd jobs to make ends meet. He saved enough to go to school for one year and, in 1970, Wooten first set foot on the UTC campus. As a 30-year-old African American undergraduate on a campus that had been desegregated only eight years earlier, he was a nontraditional student in the truest sense.

Wooten wasn’t the typical freshman; he brought with him years of life experience. “I always sat in the front of the class,” he explains. “It was costing me money to be there, and I intended to get something from the instructor. I focused on trying to learn. Of course, it had been a long time since I had been in school, and it wasn’t necessarily that easy to get started back to learning, to take notes and do all that kind of stuff and be a student again.

“I can recall that my first grade in my chemistry class was not a good one. I got a D on my first exam, and that wasn’t good at all. I had to change my strategy on how to study, and that’s what I did.”

In addition to ramping up his studies, Wooten spent many hours a week toiling to make ends meet. While working in a variety of roles at South Pittsburg (Tenn.) Municipal Hospital—orderly in the morning, maintenance worker in the afternoon—he enlisted the aid of a staff physician, Dr. James Havron. The doctor told him, “Show me your work, and I will see to it that you get a scholarship.” At the end of the semester, Wooten showed his supporter a 3.5 GPA, and Havron made good on his promise. The doctor introduced him to J. Leonard Raulston, a businessman, historian and genealogist and a member of the UT Board of Trustees. Raulston presented Wooten with the Stove Manufacturers Scholarship.

“J. Leonard Raulston was the vice president of the U.S. Stove Co. in South Pittsburg, and he was a patient of Dr. Havron’s,” Wooten explains. “As a matter of fact, it turns out it was the same stove manufacturer that my father had worked for as a laborer. So that’s how I stayed at UTC for the next four years. Dr. Havron was one of my great mentors. He believed that a brain was a terrible thing to waste.”

With a scholarship in hand, the stress of paying for college was lifted. Wooten was finally able to balance school, studying and work, and he became a first-generation college graduate. Somewhere, his parents were beaming when Hollis joined two of his younger brothers in obtaining college degrees.

After graduating from UTC in 1975 with a bachelor’s degree in engineering, he went on to have a long and distinguished professional career, including stints with Westinghouse from 1975 to 1983 and with the U.S. Department of Energy’s Oak Ridge National Laboratory from 1987 until his retirement in 2005. Sadly, after nearly 40 years together, Elserean passed away in 1997. Hollis married a second time, to the former Hertistine Every, and they were together from 2000 until her death in 2017. “Hertistine had a bachelor of science in business administration,” he says with pride. “She went to Knoxville College.”

It’s been 50 years since he first arrived at UTC and, as he got along in years, he decided to create the Wooten Family Endowed Engineering and Computer Science Scholarship Fund to celebrate the memory of his parents and spouses. He wants to give others the chance to succeed. “I needed help when I went to college,” Wooten says. “I thought one of the best ways to remember the people who helped me would be to provide something for other students who have some (financial) difficulty and need help. That’s the best way I can think to honor them, to provide some help for someone else to use as a stepping stone.”

Wooten didn’t put his name on the endowed fund. The gift agreement says the fund will celebrate the memory of the donor’s father, Lawson; mother, Lila Mae; wife, Elserean; and wife, Hertistine. They were the loved ones who gave him a purpose. They gave him meaning. Wooten insists that their legacies be remembered. “This is for all of them and not for me,” he says. “Without my mother and dad, I would not have been able to be successful and also without my spouses. They’re the ones who helped me through the years. Most importantly, they were my friends.

“The important thing is that they all should be known; people should remember them. My father and mother could have just been two people who lived and had six children and died, but that shouldn’t be their story. Nope, that’s not the truth. They were more than that; they left something for all of us. So did both of my spouses. They helped me become who I became and, without them, I wouldn’t be who I am.