Read the story about Jim and his journey to UTC below, and scroll down for the video story.

(This story was originally published by UTC Communications and Marketing on October 8, 2019 with the title “UTC newcomer receives first Retirees Association scholarship”) 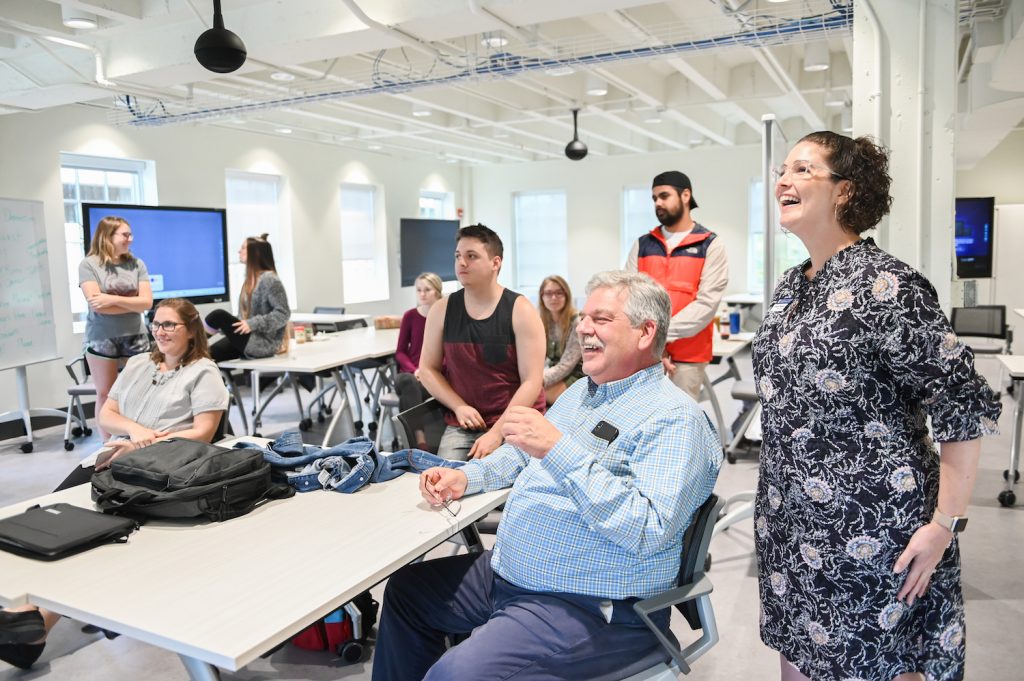 Appearances can be deceiving.

People often see silver-haired Jim Fry on the UTC campus and mistake him as a faculty member. It makes him smile, but then he explains that he’s a junior majoring in history. At 53 years old, Fry is the true definition of a non-traditional student.

He has only been going to UTC for a couple of months, but his efforts are already being noticed. After arriving on campus this semester as the Tennessee Board of Regents Outstanding Community College Student of the Year for 2019, the UTC Retirees Association has selected him as its first-ever scholarship recipient.

“This is truly an honor to be recognized. It was sort of fun for me because I was thinking how ironic it was that they had selected somebody who was close to retirement,” Fry said with a laugh. “My commitment [to education] isn’t driven by this kind of recognition, but it certainly continues to inspire me to do the best I can do. I’m motivated from inside, but I’m also proud of the motivation that I receive from knowing that other people are investing in what I am doing.”

Raised in upstate New York, Fry initially had little interest in attending college. Music was his calling, and he couldn’t rationalize how algebra or writing essays or studying science had anything to do with becoming a musician. Then his father was diagnosed with colon cancer.

“Things became really tough at home, and I was involved in helping take care of him,” Fry said.

Seven months into his freshman year at Schenectady County Community College, he put aside college in order to put his family first. After his father got better, Fry pursued his passion and began a career in church music. By the time he was at his peak, he was playing for some of the largest churches in the area, which then led to a long stint as a minister in the Methodist church.

Fry had the opportunity to share in his children’s academic successes, but it often bothered him that he didn’t have a degree of his own.

“Sitting through all of those graduations put the bug in my ear to go back to college,” he said. “I was proud of the kids, and I’d seen how hard they had worked, but there was always a nagging feeling that I never did that. I never graduated from college. I never got the opportunity to put on the cap and gown and walk across the stage.”

Not long after his daughter’s graduation, he decided it was time to make his own journey. Jim and Peggy relocated to Chattanooga six years ago after his wife was offered a position as a compliance officer at BlueCross BlueShield of Tennessee. Fry was nearing 50 and ready for the challenge of going to college.

“I was sort of at a period where I had achieved many of the goals that I had set for my life with one exception, and that was education,” he recalled. “As I said, I’m extremely proud of the kids, but it was just at that moment I said, ‘I think I have the time. I think I have the motivation. I think I’m certainly much more mature now. I’m going to give it a real college try, as they say, and do the best I can.’ The outside pressures that were there years ago weren’t there. With the support of my wife, it’s been a thrill to go back and to see such great results.”

Fry began his academic studies at Chattanooga State Community College, earning an associate degree and graduating with a 4.0 GPA. Financially, he benefitted from the Tennessee Reconnect Act, which establishes a scholarship for adults to attend a community college tuition-free.

At UTC, though, his college expenses are largely out-of-pocket. Fry said the Retirees Association scholarship is greatly appreciated.

“I’m not qualifying in years three and four for a Tennessee Reconnect Program or a HOPE scholarship or a Promise scholarship. My wife and I are pretty much just paying for this out of our checking account,” he said. “This scholarship has a significant impact as I continue to shoulder the expense of going to school without the typical scholarship help that might be available for younger folks.

“I can’t express how much [this scholarship] means to me and how exciting it is to be part of this university. Being part of the campus has made me feel much younger, and it’s really exciting to be around that kind of energy of learning new things and being part of new experiences.”