UTC History Department Head and UC Foundation Associate Professor Michael Thompson and UTC senior and History Minor Nate Collyer wrote a three-part series that was published in the Chattanooga Times Free Press on the History Department’s work to commemorate the history of Engel Stadium and baseball in Chattanooga.

Highlights from and links to the articles appear below (with links added).

As many readers of this column are aware, the history department at the University of Tennessee at Chattanooga is comprised of skilled and enthusiastic faculty committed to both student success and public service. The department engages students through an array of relevant courses and experiential learning opportunities (inside and outside the traditional classroom setting), while serving the Chattanooga community through a robust internships program, free public lectures and other events, and historical consultation and expertise. 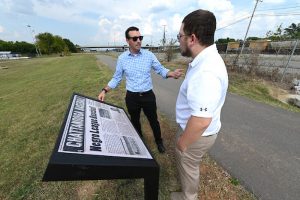 In 2017 UTC’s former director of civic engagement approached the department about creating a series of public markers documenting the history of Engel Stadium and baseball in Chattanooga. With support from the chancellor’s office and a community research and engagement grant from the UC Foundation, this project was carried out by a team of undergraduate researchers — history majors Olivia McDaniel and Hannah Ragan in 2017-2018, and history minor Nate Collyer in 2019 — under the faculty supervision of professor Mike Thompson.

Five permanent markers detailing Chattanooga’s rich baseball past were unveiled in early September, and are available for public viewing and reflection along a paved walking path adjacent to historic Engel Stadium and UTC’s Intramural Sports Complex (accessible via the facility’s O’Neal Street entrance). The remainder of this article, the first in a three-part series, features text from the marker highlighting the history of Engel Stadium itself.

The ‘Barnum of Baseball’ meets his match

Born in the District of Columbia in 1893, Joseph William Engel served as batboy, mascot, pitcher and scout for the hometown Washington Senators before owner Clark Griffith tapped him in 1929 to oversee the club’s new Southern farm team, the Chattanooga Lookouts. By 1930 the team’s ballpark, Andrews Field, had been replaced by a new 12,000-seat stadium bearing Engel’s name. 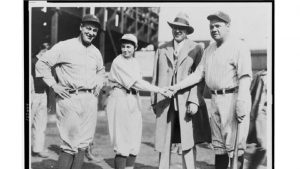 No mere master of self-aggrandizement, Joe set about to fill Engel Stadium through legendary promotions that forged his national reputation as the “Barnum of Baseball.” After the “Great Light Switch Throwing” for the stadium’s first night game attracted only 4,000 fans in April 1936, a house giveaway in May drew nearly 25,000 spectators. Amid the Great Depression, the entrepreneurial Engel also lured paying fans with the spectacle of a base-running and egg-laying ostrich, haircuts and shaves, and car raffles.

For some, Engel’s antics garnered a less flattering moniker, the “Baron of Baloney.” One opening day featured a re-enactment of the 1876 Battle of the Little Bighorn. But in Engel’s retelling, George Custer and his soldiers emerged victorious over their Native American foes. The 1938 season opened with a long-touted but racially-tinged “Wild Elephant Hunt.” Engel’s hijinks also could be unnecessarily cruel. In 1931, decades before the advent of free agency and players’ unions, Engel traded a Lookouts shortstop for a turkey. Joe Engel’s creativity and enterprise, however, prevented the relocation of the Lookouts in 1937 when he raised more than $100,000 to purchase the team by selling ownership shares to hundreds of Chattanoogans for as little as $5.

A few blocks north of Engel Stadium stands another landmark of Chattanooga baseball history. Established in 1918 amid the racial segregation and inherent inequality of the Jim Crow South, Lincoln Park served as a social and recreational oasis for black Chattanoogans barred from the whites-only Warner Park. Featuring a picnic area, bandstand, playground, basketball and tennis courts, a small amusement park and zoo, and an Olympic-sized, WPA-constructed swimming pool and bathhouse, Lincoln Park was an anchor for local black life and identity as well as a magnet for African Americans throughout the region. 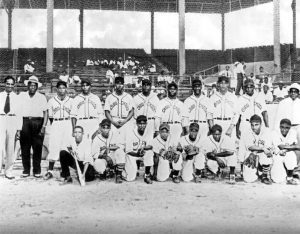 The Chattanooga Choo Choos are shown in 1946. Willie Mays is kneeling fourth from the left, and team owner Beck Shepherd is standing second from the left. / Source: Negro Southern League Museum Research Center

The baseball field was an additional focal point of the park, especially after 1938 when lights were added for evening play. Used for black industrial leagues and recreational softball, Lincoln Park also hosted decades of local and visiting Negro League baseball teams cheered on by black spectators free momentarily from the gaze and indignities of a white supremacist society. Though the historical record and memory frequently highlight African American stars who played at the more stately but segregated Engel Stadium, the likes of Jackie Robinson more often played at the Lincoln Park field.