I was given space and time to write and research on my own, but I also always had help when I needed it. —Jessica Miller, UTC ‘17

Jessica Miller writes under the pen name J. Kasper Kramer and, like the protagonist in The Story That Cannot Be Told, “wanted all her life to be a writer.” With the release of her debut novel from Simon and Schuster’s Atheneum Books and starred reviews from Publisher’s Weekly, Kirkus Review, and School Library Journal—tremendous accomplishments, especially for a debut author—Miller has achieved that goal and more.

If I had wound up at a different school, I honestly might not have had so much success publishing my first novel. 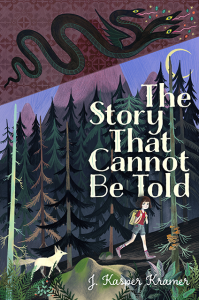 The Story That Cannot Be Told is about 10 year-old Ileana who loves to write and lives in Romania in the 1980s, when communist dictator Nicolae Ceausescu ruled all aspects of life there.

Miller got the idea for The Story That Cannot Be Told when she was living in Japan and teaching at an international school. She received offers from a couple programs, including the one at UTC, but had a hard time deciding where to attend since she couldn’t tour the schools or meet the professors while living so far away.

According to Miller, “a little luck from the universe intervened at that point, because a job opportunity opened up for my husband in Chattanooga, and that made the decision for us. If I had wound up at a different school, I honestly might not have had so much success publishing my first novel.”

The guidance I got from UTC faculty was invaluable.

One of the first classes Miller took was Dr. Sarah Einstein’s creative nonfiction workshop. She hadn’t written in the genre before but “wound up absolutely falling in love.” Her first two publications were essays that came out of that class, and she still writes creative nonfiction.

She also loved Dr. Matthew Guy’s Literary Theory and Criticism class, which made her think deeply and in new ways about the stories she reads and writes.

And Miller cites her work with Professor Sybil Baker as key to the development of her novel. She explains, “I wrote Story as my master’s thesis, and my independent study with Professor Baker is where the first chapters and initial plotting for the novel all happened. The guidance I got from UTC faculty was invaluable.”

The initial idea for The Story That Cannot Be Told came from the personal stories she heard from friends she met while teaching in Japan. They told her about growing up in Communist Romania, and these women and their stories played an important role in her research process. Her studies at UTC helped Miller organize her research and story ideas. In addition to providing excellent feedback on her writing, her professors gave her suggestions for readings that complimented her work and helped her develop her craft.

Holding a physical copy of my book for the first time…It had me shaking and in tears—I just had dreamed about it for so, so long, you know?

For Miller, the publishing process has been both scary and wonderful. As a debut author, she saw each step as “a major first—first revisions with a real editor, first copy edits, first reviews, first signings—all of it was intimidating.” Some of the great moments included an early signing at Books of Wonder in New York City and a tour of Simon & Schuster’s headquarters. But, she adds, the best part was “Holding a physical copy of my book for the first time, with my name on the cover. It had me shaking and in tears—I just had dreamed about it for so, so long, you know?”

With three new novels currently in progress, Miller will soon grow used to the fanfare surrounding her work. She’s at work on a young adult novel set in 1850s Poland about a woman whose family believes she’s a changeling, and she’s drafting two middle grade novels: a ghost story set in 1910 New York City and a folklore-inspired tale set in contemporary Japan.

Miller wants current creative writing students to know that their courses are important, but “ultimately, you have to set your own goals and stick to them. A professor might help you revise a novel—in some courses, you might even have deadlines for word count and plot beats—but no one is going to force you to finish your book. If you really want to see your words in print—if you really want other people to read them—you have to fight for it.”

Luckily for her readers, Miller has immense talent, fight and, as she says, “more stories in my head than I have time to write.”

You can purchase The Story That Cannot Be Told, from Star Line Books at 1467 Market Street, Amazon, Barnes & Noble, Books-A-Million, and many other retailers. UTC is lucky to still have Jessica Miller teaching English courses on campus—so she may even sign your copy!