In a politically, morally, and emotionally divided and diverse social climate, the obvious thematic choice, according to Dr. Aaron Shaheen, the Take Five coordinator for this Spring’s  Take Five book club meetings and discussions, had to be ‘frontiers and borders.’

Beginning in 1992, the inaugural theme was “simply ‘Five Great American Novels,’” and has since evolved into a tradition kept alive by passionate scholars. Clif Cleaveland began this year’s round of Take Five meetings with Paulette Jiles’s News of the World, followed by Hugh Prevost, who chose Simon Winchester’s The Professor and the Madman. Both highly esteemed panel members are now retired but chose to return to Take Five, continuing the tradition, just as Dr. Aaron Shaheen does by having taken on the Connor Professorship in American Literature. Named after the founder, George C. Connor, the position which entails hosting, planning, organizing, and leading each session. Dr. Shaheen’s book of choice for this upcoming session, is, as he describes, “the fourth best novel in the English language: Willa Cather’s 1922 Pulitzer-winning novel One of Ours.”

When asked why he might take on such a responsibility—one of shouldering the responsibility and tradition of Take Five meetings in addition to his other obligations—Dr. Shaheen said that, “Take Five has become a labor of love…  The first time I was pretty overwhelmed with the task of reading five different books, creating a 35-minute presentation on one of them, and having intelligent things to say about the other four–all while teaching my regular classes. After that first go-around I told myself I wouldn’t do it again, and yet when Verbie [who previously held the position and recently retired from the English Department] asked me to commit for a later year, I somehow couldn’t say no, despite the work involved. I simply had too much fun doing it.”

Dr. Shaheen believes that Take Five “is one the most important ways the English department gives back to its former students and to the Chattanooga community,” as all ages, UTC students or not, are welcome to attend Take Five meetings. Dr. Shaheen understands that the demographically older attendance at these meetings is “because they have the time to read the books. For students who are already taking a full load of classes and working part-time or full-time, adding five more books to their schedule is too much.”

However, Dr. Shaheen insists that “by no means must potential attendees have read the books in order to attend the sessions. The night’s presenter usually offers a summary of the book at one point in the remarks, and the presentation itself is geared toward a non-academic audience. The discussion of the books can whet the appetites for those who have not read the books–much like a good back cover can make a book attractive to a browser at a bookstore.”

If passionate commentary on literature, casual and “spontaneous” discussion, or a light and social dinner might interest you, Dr. Shaheen will be at each session, ready to greet you warmly. He begins each session by  “welcoming the guests and introducing the speaker” and he prefers to be “more folksy and personal.” The speaker of the night (one of the five panelists) gives a 35-40 minute talk on their book of choice, and after a brief intermission, an open, “interesting and often humorous” discussion between the five panelists and attendees will ensue.

Dr. Shaheen finds Take Five, and other discussion-focused book clubs, especially valuable because “books are best understood in open settings because all the participants can help each other out. Interpretation of texts is most successful in a collaborative setting. I may have only so much to bring to a discussion of a certain novel, but where I fall short in my knowledge or insight, another participant can fill in the gaps.” Dr. Shaheen considers this discussion the most exciting part of each session—everyone is welcome to share their thoughts, ideas, or jokes, and open them up for debate. Even if you have not read the book, you’ll have plenty of context from the speaker’s summary and presentation to work with, and to formulate your own ideas or interpretations. He reports that “spontaneous discussion [often] arises. We don’t take ourselves too seriously on that stage, though we certainly take the readings seriously.”

In his own Take Five session, Dr. Shaheen hosted and presented his book of choice, the 1922 Pulitzer-winning novel One of Ours, to a packed hall. Eager attendees, consisting of students and community members, filled their plates, poured some coffee,  squeezed in next to each other, and turned all attention to the passionate yet eloquent presentation. Dr. Shaheen explains the story is “about a young man who mourns the loss of the American frontier and, foolishly or not, treats World War I as his own frontier, as an attempt not to establish civilization exactly, but to save it from mechanized weaponry.” Describing the novel as “ironic” because of a compelling and unexpected role reversal in thematic elements: “this ‘frontier’ novel that moves not from east to west, but from west to east.” Cather does not pander to any romanticization of war, but writes with “sincerity and tenderness.” 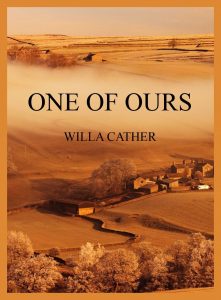 The intermission following the presentation allowed guests to digest and chatter about the array of ideas to which they had just been introduced. One woman who saw the Take five ad in the newspaper, a Chattanoogan and retired schoolteacher, remarked how she was glad there was a space she was able to come discuss a books in a non-pretentious, yet still academic, environment. The following talk with the panelists offered more unique insights and points of interest, sparking comments from many of the guests, leading to exciting discussions, slight debates, and questions, and the panelists regarding each with sincere consideration and respect.

Dr. Shaheen explained that “the ‘feel’ for [Take Five sessions] is informal. Many of the attendees have been coming for years, so for them and for the panelists, the sessions provide a chance to socialize and reconnect.” Leave your berets at home—or wear them; it’s always a judgement-free zone.

If you’re feeling hesitant to attend a Take Five session, Dr. Shaheen reassures us that “current students who are already overloaded with tests and assignments can experience literature in a low-impact and very friendly environment. And there’s a free dinner involved. Come for the food and stay for the learning and camaraderie!”

The upcoming Take Five sessions will be on March 19th where Dr. Matthew Guy will speak on Thomas Berger’s Little Big Man, and on April 2nd, the final session of the year, where former host Verbie Prevost will speak on Celeste Ng’s Little Fires Everywhere.