On October 14, the UTC History Department, Africana Studies Program, Department of English, and Department of Political Science welcomed Professor Joshua D. Rothman to converse with the UTC community about his new book The Ledger and the Chain: How Domestic Slave Traders Shaped America published by Basic Books earlier this year.

Read more about the event in the UTC News Blog here and below.

Read and listen to Prof. Rothman’s interview on WUTC’s Scenic Roots here and below. 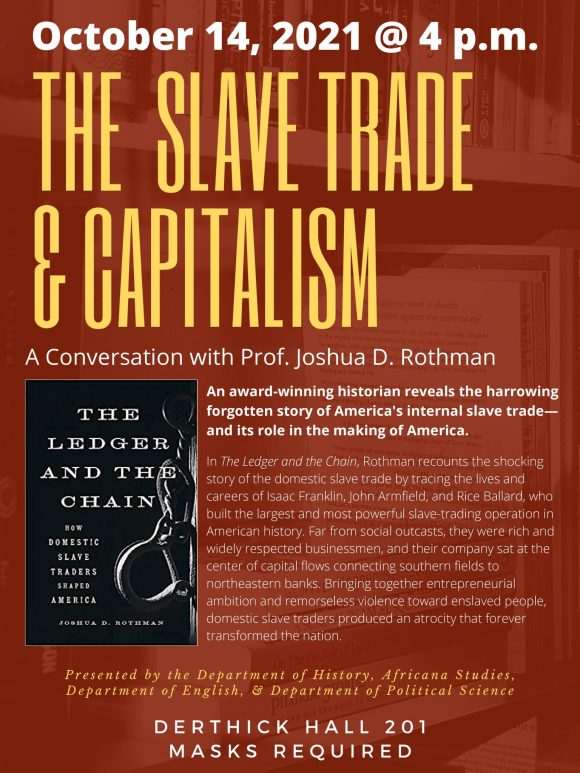 Joshua D. Rothman is professor of history and chair of the department of history at the University of Alabama. He is the author of two prize-winning books, Flush Times and Fever Dreams and Notorious in the Neighborhood. He lives in Birmingham and Tuscaloosa, Alabama.

Slave traders are peripheral figures in most histories of American slavery. But these men—who trafficked and sold over half a million enslaved people from the Upper South to the Deep South—were essential to slavery’s expansion and fueled the growth and prosperity of the United States.

In The Ledger and the Chain, acclaimed historian Joshua D. Rothman recounts the shocking story of the domestic slave trade by tracing the lives and careers of Isaac Franklin, John Armfield, and Rice Ballard, who built the largest and most powerful slave-trading operation in American history. Far from social outcasts, they were rich and widely respected businessmen, and their company sat at the center of capital flows connecting southern fields to northeastern banks. Bringing together entrepreneurial ambition and remorseless violence toward enslaved people, domestic slave traders produced an atrocity that forever transformed the nation.

These slave traders, especially Franklin, had connections to Middle and SE Tennessee.

In conjunction with his visit, about fifteen students in Prof. Johnson‘s History of the American South and African American History to 1865 classes participated in a book club with support from the Department of History and the Walker Center for Teaching and Learning. These departments provided the books free of charge to the students. The students read his book prior to his arrival and had the opportunity to have lunch with him on the day of his visit.

Check out the book exhibit here. 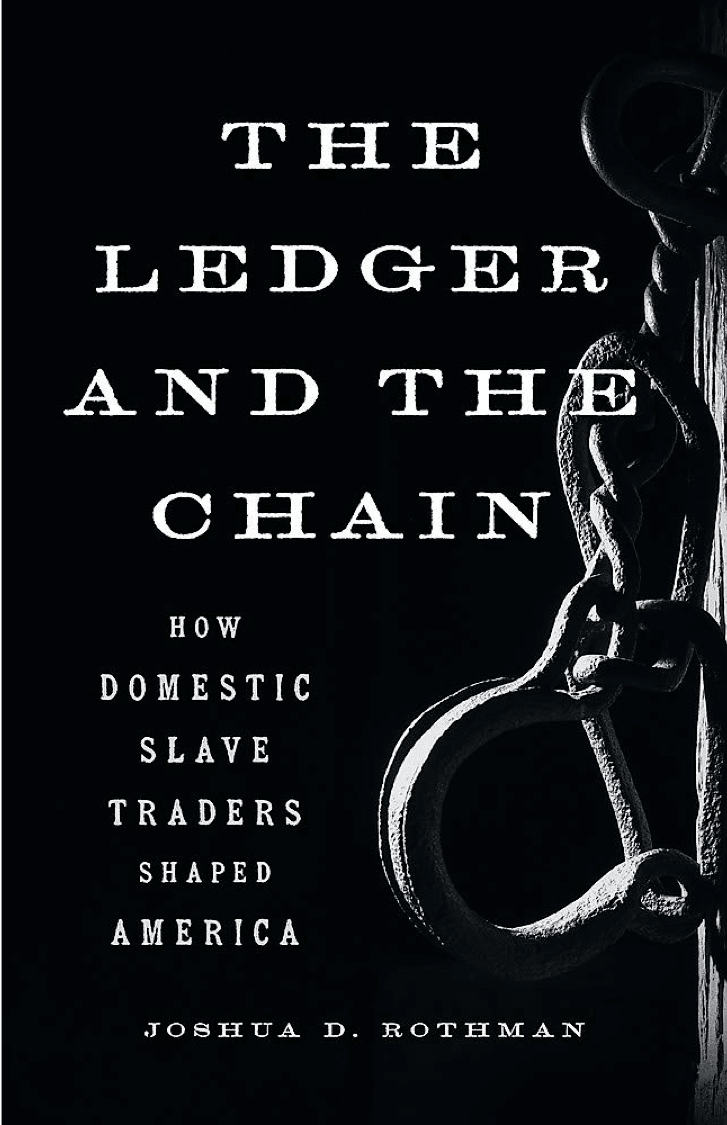 Author to discuss slave trade in the Southeast

Slave traders are only mentioned in passing in most American slavery histories. These traffickers sold almost half a million enslaved persons from the Upper South to the Deep South and were critical to slavery’s spread.

They also played a prominent role in the growth and wealth of the United States.

A conversation-style event featuring an award-winning historian will take place on the University of Tennessee at Chattanooga campus to discuss this convergence of slave trade, capitalism and economic growth.

On Thursday, Oct. 14, the UTC Department of History, Africana Studies Program, the Department of English and the Department of Political Science and Public Service will welcome Joshua D. Rothman to discuss his new book, The Ledger and the Chain: How Domestic Slave Traders Shaped America.

The conversation with Rothman, a professor and chair of the University of Alabama’s history department, will begin at 4 p.m. in Derthick Hall 201.

“The book is about the men who ran the largest domestic slave trading operation in American history,” Rothman said. “But their story also lets us trace the entire lifecycle of the slave trade itself.

In The Ledger and the Chain, Rothman traces the lives and careers of Isaac Franklin, John Armfield and Rice Ballard, a trio who constructed the largest and most powerful slave-trading operation in American history. They were far from social outcasts and instead were wealthy and widely respected businessmen. Their firm, Franklin & Armfield, connected Southern fields to Northeastern banks.

“He bought the Beersheba Springs resort after he retired, and basically served as a kind of impresario of the place for years, hosting Southern elites on their summer vacations. He was also instrumental in helping found the University of the South,” Rothman said.

In conjunction with Rothman’s visit, more than 15 UTC students are participating in a book club reading of The Ledger and the Chain before his arrival.

How “The Ledger And The Chain” Examines The Domestic Slave Trade 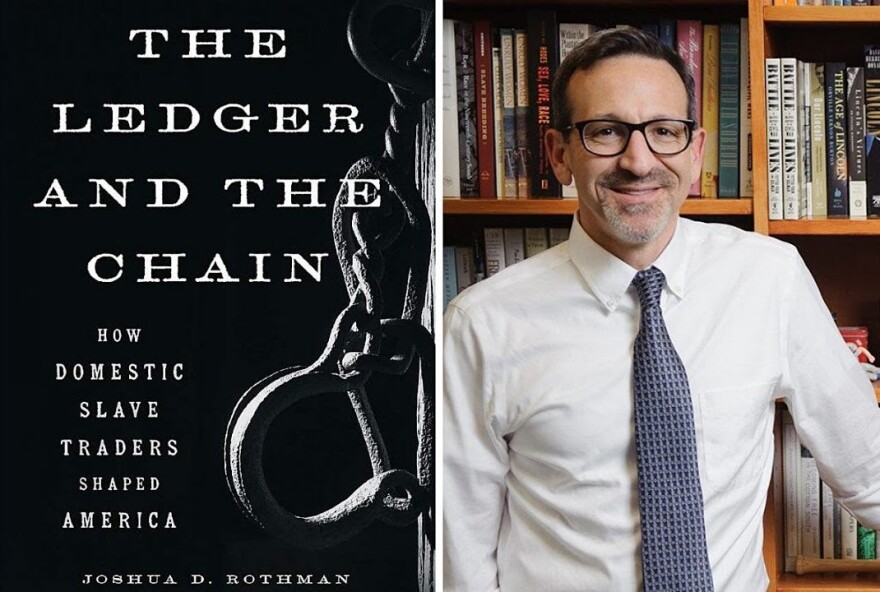 “The Ledger and the Chain” tells the forgotten story of how the domestic slave trade shaped the history of this country – including here in the Southeast.

Prof. Joshua D. Rothman is the author of the book, released earlier this year.

He chairs the Department of History at the University of Alabama.

On Thursday (10/14/21) starting at 4 PM, he will appear on our campus – the University of Tennessee at Chattanooga – in Derthick Hall 201 for a talk and a conversation titled “The Slave Trade and Capitalism.”

I spoke with him – and Dr. Mark Johnson, a lecturer in UTC’s Department of History.

Tagged with: Africana Studies Events Mark A. Johnson What History Teaches You Why History Matters