May Travel Seminar: Budapest and Prague 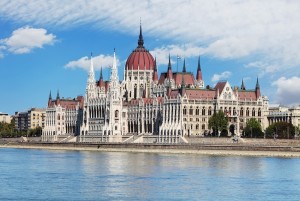 A River Runs Through It. This was the theme of a tour developed by one group of students as a study of Budapest and Prague, destinations for our May Travel Seminar. There are several similarities between these two riverside cities; each has a hilltop castle complex, a Jewish Quarter with grand synagogues, striking architecture, and famous bridges. Both were once part of the Hapsburg Empire and also share histories of Nazi, and then Soviet, occupation. And each has a famous saint: Budapest’s St. Stephen and Prague’s St. Wenceslaus. But each capital is stunning in its own way and offers a different experience.

The first few days of the trip were spent exploring Budapest. The city was harshly bombarded during World War II, so much of it has been rebuilt. While the city is much larger and more spread out than Prague, it was easy to navigate using public buses and trams. In addition to group visits to the Parliament Building and the Great Synagogue, students followed tours they developed as part of the Travel Seminar during the spring semester. They studied the Hungarian Revolution of 1956, Underground Budapest, the history of Central European Jewish integration, and analyzed the cultural underpinnings of the Hungarian State as it exists today. Many also ventured to the thermal baths, a pastime first enjoyed by the Romans and later by the Turks. And the best time to just enjoy the beauty of the city is from a boat on the Danube at night.

The overnight train from Budapest to Prague arrived at the station at 4:30 a.m. Although it might not seem possible to use these early hours to advantage, a guide collected us and our luggage and we began our day. By 5:15 the sun was rising and we were beginning our orientation to the city. Early morning, before the city comes to life, is a magical time for a walk through Prague’s historic district. This is the only time to experience the city center without the noise and crowds that are part of everyday life. 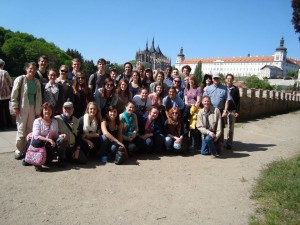 Our group at Kutna Hora, outside of Prague

We left immediately after breakfast for a short trip outside the city to Kutná Hora which was once a prosperous city, its wealth the result of silver mining in the Middle Ages. We visited the beautiful Cathedral of St. Barbara, a late Gothic cathedral and the symbol of the city. But the primary destination here was the Sedlec Ossuary, also known as the Bone Church. In this very unusual chapel are the remains of an estimated 40,000 human skeletons, artfully arranged to form chapel decorations; possibly the most remarkable is the huge chandelier of bones in the nave’s center.

Back in Prague, we had four days to explore. Prague is much more crowded than Budapest; it is popular with tourists who flock to the city to see its most recognizable sites, Prague Castle and the Charles Bridge. Still, the preserved historic center maintains the feel of an old European city. And in contrast to Budapest, Prague is a walkable city.  Student groups prepared tours that followed the Royal Road, explored Petrin Hill, and provided a guided walk through the city to explore counter-culture responses to communism. And no visit to Prague can be complete without a study of its Jewish history and tradition; it can take an entire day to visit the several synagogues and museums in the Jewish Quarter. The Spanish Synagogue is considered the most beautiful, but the Pinkas Synagogue is perhaps the most memorable, where inscribed on its walls are over 77,000 names of Czech victims of the Holocaust.

This year we welcomed alumni travelers Rebecca Shelton and Taylor Loy, Meghan O’Dea, and Sarah and Ben Kennedy. Twenty-three students participated in the Travel Seminar; four with financial need were funded through the generosity of alumni and friends who donated travel scholarships. In the words of one of those scholarship recipients traveling abroad for the first time: Words cannot describe the immeasurable beauty I witnessed while I was there… you truly provided me with a once in a lifetime opportunity to expand my world-view. You also have lit a fire in me that craves travel and I have now started planning my study abroad trip for the fall of ’16. His reflection on the experience captured the sentiment of many students who have had this opportunity. Special thanks to the alumni and friends who make this experience possible.