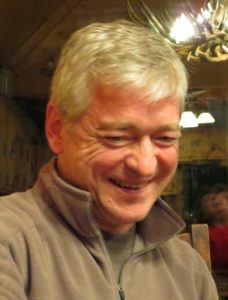 I was 10 years old when Gavin Townsend came into my life. He was there for my first trip to Europe, along with his wife Bonnie, my parents, a dozen Honors College students and, delightfully, his son Evan, who was just my age. In many ways, it was Gavin who taught me the somewhat relentless approach to travel that I still embrace, as well as the importance of pursuing experiential learning whenever possible. For over a decade, I had no idea there were modes of travel that didn’t include miles-long marches to strings of ruins and architectural wonders that paused only for beer, wine and good food. Relaxing on boats or beaches was simply not the Townsend way.

Gavin taught me from an early age that there is too much to see and too much to appreciate to ever slow down or waste time. The man was a famous proponent of data and efficiency. He tested a variety of tools and gadgets, always trying to find new ways to better understand both himself and the world around him and streamline his way through everything life had in store. For Gavin, it wasn’t a matter of “smarter, not harder.” It was a matter of “smarter so you can go harder.”

Over the 20 years that I had the privilege of knowing Gavin, we must have traveled together on at least a dozen occasions. But it was the time we spent together between excursions that made the biggest impact. As I said before, I met Gavin when I was about 10. He was one of my family’s fast friends throughout my moody adolescence and a decade when I often struggled with self-confidence. What I recognize now from the vantage point of my 30’s is what a quiet force of moral support Gavin was, the way he was capable of buoying the spirits of not only those close to him, but in his broader orbit, too.

The gift that Gavin Townsend gave me was as simple as this: He took me seriously. I can’t overstate how valuable it is to a young person when an adult believes in you, especially an adult who is neither legally nor biologically obligated to do so. At every age, no matter how awkward or ignorant or dramatic I might have been, Gavin consistently made me feel like I was a worthwhile person who had something meaningful to contribute. His faith that I not only would be alright, but already was, never wavered.

This was a gift Gavin was able to offer countless students, mentees, colleagues, friends and relatives. It’s rare to find those special people who have a talent not just for instruction, but sharing a delight in the topic at hand. Who can chuckle at you when you’re being ridiculous or missing the mark, but help you see the humor in your error as well. Who can offer insight based on their own breadth of accomplishments and knowledge without making you feel less accomplished for knowing different or fewer things. Gavin was the sort of person who genuinely believed in the capability of others.

Perhaps this was because Gavin himself exuded not just confidence, but assurance. Sometimes that inclination to forge ahead could get him, and everyone else along for the ride, into a pickle—like the comically disastrous hike we took along Hadrian’s Wall in Scotland that led us straight into the path of a helicopter crash and epic thunderstorm. Sometimes it could be frustrating trying to keep up with his boundless energy and distinctly opinionated nature. More often, however, Gavin’s strength of assurance invited you to shake off the small stuff, to live with intention and integrity and get down to pursuing your own passions.

There is no better example of what can unfold from that assurance, I think, than the man that Gavin’s son Evan has become since we were two gawky tweens swapping Gameboy cartridges between European cities. Evan embodies many of his father’s best qualities. The two of them share an affinity for the meticulous exploration of new places, a deep and abiding respect for others (and especially for women), a driven pursuit of personal excellence and a natural curiosity about the underlying architecture of the human experience.

When Gavin set out with my parents and a new generation of Honors students on a trip to Peru this summer, I would have never guessed he’d pass away two weeks later, senselessly and suddenly. The sculptural solidity of his being simply didn’t ever permit me to consider him as anything but a permanent fixture in my life. I had every reason to believe we’d all have another 20 years following Gavin down the roads he cheerfully plowed, whether they led to Rome or some equally delightful destination.

I am comforted to know this, however: While there are many people I have loved and some I have lost, Gavin is one of the few I really aspire to emulate. Gavin gave each of us here in this room today—and many scattered around the world who couldn’t attend—something more potent than memories. When I look back on the trips we took, the meals we shared, the classes he taught, the guidance he offered, and the example he set, I am studying a text of the heart titled Townsend’s Guidebook.

Gavin taught us to see in ruins the empires that once stood, to glean from history an admiration for what endures and to allow the glories of the past to enrich our present. And so, from the midst of an unspeakable loss, I still can say with deep, Towsendian assurance that we have what it takes to continue. After all, Gavin’s 61 years were nothing short of a well-studied course on how to live well.

Many of you have asked how you might meaningfully memorialize Dr. Gavin Townsend, Professor of Art History and former honors director, who recently passed away after a brief illness. The family requests that donations be made to the Gavin Townsend Travel Fund, which will support study travel for honors students with financial need.

Donations can be made online at http://give.utc.edu/townsend, or by sending checks payable to the UC Foundation. In the memo section of your check please put Gavin Townsend Memorial Travel Fund and mail to Development and Alumni Affairs at 615 McCallie Ave Dept. 6806, Chattanooga, TN 37403.