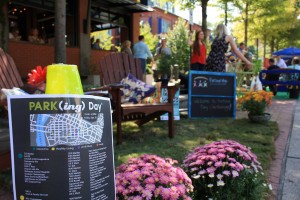 Park(ing) Day takes place annually in cities around the world, always on the third Friday of September. Honors students have embraced the concept and will be the first representatives of UTC to participate in Chattanooga’s event.

What is Park(ing) Day? The idea originated in 2005 in San Francisco as a way to highlight the need for more urban open spaces and to help people think about how urban space was allocated and used. A single metered parking space was temporarily transformed into an urban park that stood for two hours, the length of time purchased on a parking meter. The idea became a worldwide movement to create inviting spaces, and “parklets” were created for a variety of purposes; they might call attention to a city’s needs, provide a service to the community, entertain, or educate.

Park(ing) Day in Chattanooga is sponsored by the River City Company, a non-profit organization dedicated to the stimulation of economic, cultural, and social growth of the community   Our students will promote the Chautauqua concept, a movement that originated in the late 19th century in Chautauqua, NY. The original Chautauqua Centers brought instruction, culture, entertainment, and intellectual stimulation to smaller communities around the country where such opportunities were not readily available. The notion of sharing knowledge, a skill, or talent with others has become a tradition in the honors community and our parklet on September 18th will serve as a space for visitors to have a variety of experiences. A series of programs will include everything from musical and theatre performances to story-telling, as well as interactive activities like art design, yoga lessons, and face-painting. If you’re in the area, come find us between 10:00-4:00 on Market St. around Miller Plaza, one of many parklets created for the day in the downtown area.