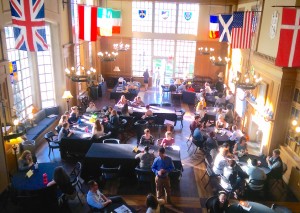 Sometimes the best advice comes from people who have walked the path you’re walking, and then take the time to double back and guide you along the way. That’s what happened Thursday, October 29 when a dozen Brock Scholar alumni returned to campus to meet with Honors College students at our first annual Alumni Table Talk event. 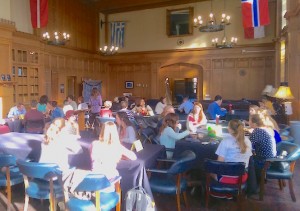 Each alumnus led a “topic table” in the Reading Room, ready with a topic of interest and advice about undergraduate life, graduate schools, professional careers, and more. Honors College students had many opportunities to talk with them about their goals and interests and how best to prepare for what’s next. Students found the discussions relevant, practical, motivating, and inspiring. Several students reported that their goals now seem “real,” knowing that others have successfully achieved them. Other students expressed surprise at the directions some alumni took, discovering that undergraduate majors don’t always align with career paths.

Our alumni for the event:

Andy Basler
Andy graduated in 2007 with a B.S. in Political Science & Psychology. As a Brock Scholar, he spent one semester abroad in South Africa in 2006.  He graduated in 2010 from George Mason School of Law and opened his own law practice in 2011, focusing on criminal defense and general civil litigation.   In his work as a criminal defense attorney, Andy has represented clients with offenses ranging from misdemeanors to first degree murder.  He has argued cases before the TN Court of Appeals, TN Court of Criminal Appeals, and the Tennessee Supreme Court.
Topics: Law school and solo law practice, the value of study abroad, and more

Carmen Carson
Carmen earned her Bachelor of Arts degree in Human Ecology Child and Family Studies in 2003. She went on to earn a Master of Arts in Instructional Leadership from Tennessee Technological University in 2007. Carmen’s career has been devoted to helping others access education and live incredible lives. The initial part of her career was with Hamilton County Schools as a teacher and instructional coach until she went to UT Chattanooga to serve as an Academic Specialist and Graduation Coach. In addition to this work, Carmen has spearheaded the launch of educational companies, coordinated the services for area youth programs, served as a conservator for adults with disabilities, and led the branding and websites design process for small companies.

In 2015, Carmen launched FAVORDD, a creative agency designed to serve the life and business challenges of leaders, online entrepreneurs, and nonprofits through coaching, branding, design, and other creative strategies. In her efforts to reach out to the youth of the Chattanooga community, she actively serves as the part-time College and Career Advisor for the students of Hamilton County High School. She is passionate about helping individuals discover their purpose, work in their passion, and earn a profit by doing what they love.
Topics: It’s OK to change professions; working in education; starting your own business

Henry Dyson
Henry graduated in 1997 with a Bachelor of Arts degree in Philosophy and Humanities and a minor in Greek.  While at UTC he spent a year on the rowing team, was the president of the Philosophy Club, coached debate for The McCallie School, and studied abroad at Masaryk University in the Czech Republic, and was a semi-finalist for the Rhodes Scholarship.  He completed his PhD in Greek and Roman Philosophy at Emory University and taught at The College of William and Mary and the University of Michigan. Henry is currently the fellowships advisor for the LSA Honors Program at Michigan, working with candidates for the Rhodes, Marshall, Truman, Gates-Cambridge and many other national scholarships and fellowships. He is married to Melissa Combs Dyson, also a Brock Scholar and 1997 graduate. Melissa is a clinical associate professor at University of Michigan Medical School and assistant director of Michigan’s Unit for Laboratory Animal Medicine.
Topic: Preparing for national scholarships and how to develop a competitive application

Kelly Jo Fulkerson-Dikuua
Kelly Jo Fulkerson-Dikuua graduated from UTC in 2006 with a Bachelor of Arts degree in English and a minor in Women’s Studies. After graduation, she completed her master’s degree in Theological Studies at Harvard Divinity School. Following her master’s program, she worked for World Education, a non-profit development company in Boston and then moved to Namibia (2009, 2011-2012) and Rwanda (2010) to work for WorldTeach, a non-profit organization that sends volunteer teachers abroad. From 2011-2015, she lectured at the Polytechnic of Namibia in Windhoek, Namibia. She is currently completing a Ph.D. in African Studies at Ohio State University.
Topic: Opportunities to study & volunteer abroad; living and working in Africa

LaShunda Hill
LaShunda Hill is a native Tennessean committed to expanding the provision of community-based services as an alternative to incarceration and out of home placement for children in the juvenile justice and child welfare systems. She currently works for the Pew Charitable Trusts where she provides technical assistance to states seeking to reform their juvenile justice systems to improve youth outcomes. Previously, LaShunda served as state strategist for the Campaign for the Fair Sentencing of Youth (CFSY), where she led statewide advocacy campaigns that sought to provide second chances for youth sentenced to life without parole and other extreme sentences in the adult criminal justice system. Before joining CFSY, she worked as a family intervention specialist for Youth Villages in Chattanooga, TN. LaShunda is a graduate of the University of Tennessee at Chattanooga with degrees in Political Science, Sociology and International Studies and holds a Masters from the Harvard Graduate School of Education.
Topic: Working with at-risk youth; advocating for youth in the criminal justice system; taking advantage of opportunities in college

Ben Kennedy
Ben Kennedy is the Lead Engineering Training Instructor at TVA’s Watts Bar Nuclear Plant. He graduated from UTC in 2007 with a Bachelor’s Degree in Mechanical Engineering, where hew as an active member of the University Honor’s Program, Tau Beta Pi, and Habitat for Humanity. After graduating from UTC, he began his career as a Mechanical Design Engineer at Watts Bar Nuclear Plant.

After four years, Mr. Kennedy acquired his Senior Reactor Operator Certification and performed oversight of engineering as part of the Quality Assurance organization. Finally, after a two year tenure in Quality Assurance, he settled in to educating his fellow engineers in the exciting field of nuclear power.
Topic: The importance of the Arts and Humanities to STEM fields in enhancing professional success and diverse job opportunities.

To quote Ben: “There are a couple of topics I think would be useful to discuss based on two serious misconceptions I had while in college:

Clearly I was way off. What I’ve noticed on a personal level is that people with technical degrees that lacked a strong background in soft sciences can analyze an issue, but they don’t understand their audience or how to express their ideas in a way others can understand.” Ben is also glad to talk about his profession, nuclear power, plant systems, and/or reactor physics.

Sarah Kennedy
Sarah E. Kennedy is a partner with Estes & Kennedy Law Offices, P.L.L.C.  She graduated magna cum laude from UTC in May 2008 with a bachelor’s degree in Biological Sciences.  While at UTC, Sarah was active with Habitat for Humanity and served on the University Honors (Brock Scholars) Council.  She went on to receive her law degree from the University of Tennessee College of Law.  While at UT-Law, Sarah received numerous awards for writing and editing, was selected as a second-year editor for the Tennessee Law Review, and was chosen as an Executive Editor for the journal in her final year of law school. In addition, Sarah was a member of UT-Law’s National Environmental Law Moot Court. While in law school, Sarah worked as a law clerk for the Solicitor’s Office of the U.S. Department of the Interior and as a National Environmental Policy Act Specialist for the Tennessee Valley Authority. She also worked as a judicial intern for Justices Sharon Lee and Gary Wade of the Tennessee Supreme Court as well as Judge John W. McClarty of the Tennessee Court of Appeals.

Mandy’s work has been featured in AR100, Print Magazine, the Graphis Letterhead Annual and Contract. She has received the Domtar Paper Envy Award, Addy Awards, and her design was honored in 2010 by the International Interior Design Association with a Best of NeoCon World’s Trade Fair award.  In 2012, she was nominated and accepted to attend the Business Perspectives for Creative Leaders program at Yale School of Management.
Topics: The graphic design profession; women in business

Zach Patton
Zach Patton graduated in 2002 with a B.S. in political science. During his time at UTC, he worked as a reporter and, ultimately, editor-in-chief of the University Echo. Zach was also an active member of the Political Science Club, and he was president of the Honors/Brock Scholars Council. After graduation, he worked as a political reporter in Washington D.C. Today he is the executive editor of Governing, a D.C.-based magazine that covers state and local government and public policy across the country.

Eva graduated from UTC in 2007, with a B.S. degree in Chemistry, with a Biochemistry concentration and from the UTHSC College of Medicine with the M.D. degree in 2011. Eva completed a residency at VCU, rural branch, and a Shenandoah Valley Family Medicine Residency in 2015
Personal Interests: International travel, spelunking, hiking, anime
Professional Interests: Adolescent and Women’s Health
Topic: “I’ve had a very circuitous route in my medical career with many forks of life choices, such as applying simultaneously to Graduate School in Biochemistry and Medical School. I can relate to the entire process in retrospect on both sides of application and interviewing. If I can be of any help, ask me a question. Gain from other’s experiences and ask questions.”

Katherine Smalley
Katherine Smalley graduated with a Bachelor of Arts in Humanities: International Studies and Spanish in 2010. During her time at UTC, she spent a semester abroad in Dharamsala, India, where she conducted field research for her senior thesis on the role of women in the Tibetan exile community. After graduation, she worked for a year with a nonprofit in Chattanooga before going on to earn a Master of Science in Refugee and Forced Migration Studies from the University of Oxford in 2012. She then moved to Geneva, Switzerland for an internship and later consultancy with the International Organization for Migration (IOM), working on issues such as human displacement, camp management and protection. She has recently completed an assignment with IOM in Islamabad, Pakistan, where she worked in humanitarian coordination and disaster response.
Topic: Katherine would be happy to answer questions related to:

Andy Walker
Andy graduated from UTC in 1981, in the first class of Brock Scholars. He received his M.D., cum laude, from the University of Tennessee College of Medicine where he was elected to membership in Alpha Omega Alpha. He completed his residency in emergency medicine at Shands-Jacksonville hospital in 1988. After nearly eight years as an attending in the Vanderbilt University Medical Center emergency department, where he twice won the Corey Slovis Award for Excellence in Bedside Teaching, Andy left academic medicine in 1999 and joined Cumberland Emergency Physicians, P.C., a one-hospital democratic group in Nashville. While with CEP, he served as chairman of his hospital’s Peer Review/Quality Assurance Committee and on its Medical Executive Committee. In the summer of 2012 he entered semi-retirement, but continues to practice clinical emergency medicine part-time. He also continues to consult as an expert witness in litigation involving emergency physicians. Andy is a founding fellow of AAEM and was instrumental in forming the Academy’s Tennessee chapter, TNAAEM. Members of TNAAEM are currently leading a crusade in the State of Tennessee to change the definition of malpractice for medical care provided under the unfunded federal mandate EMTALA, from simple negligence to gross negligence. This change in the law would essentially eliminate unreasonable lawsuits against emergency physicians and the on-call specialists who provide the medical safety net in Tennessee.
Topic: Are doctors unhappy? Is medical school really right for you?