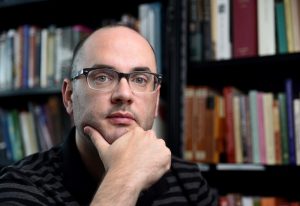 Dr. Andrew McCarthy, English professor and department head at the University of Tennessee at Chattanooga.

English Department Head Dr. Andrew McCarthy announced the coming formation of a new English Club and Student Steering Committee. English majors, minors, and even students with only a general interest in language and literature, rhetoric and professional writing, and creative writing will be invited to join the English Club. Students who join will have the opportunity to attend theatrical productions around the area, monthly teas, and short readings and discussions on contemporary works receiving acclaim and attention.

Of his hopes for English Club, Dr. McCarthy said, “We want to start emphasizing literary and rhetorical analysis and being active, engaged readers and writers once you leave UTC. We thought about trying to have brief readings, to talk about a poem that has recently appeared in a publication that has generated some interest. Having people sit together, talk about a poem, and discuss the controversy or the acclaim a poem has received will help students see what we do as professional academics and English professors. We engage in contemporary works as much as we engage in the analysis of Shakespeare or Milton. We have faculty who teach contemporary literature, rhetoric, and creative writing who are aware of the ongoing discussions happening in our fields but we don’t have a space to share that with students. We might start doing a better job of showing students what being an academic looks like through lived experience.”

Additionally, Dr. McCarthy plans the formation of a Student Steering Committee. The Committee would consist of approximately 6 students who, as McCarthy put it, “…are interested in thinking about their place and the UTC community, who would meet bi-weekly or monthly to address student concerns and to bring to my attention things that I might not know. I want to hear about what they think is important as English majors at UTC. They might develop suggestions on courses that we don’t typically teach that they would like to see or courses that don’t currently exist at UTC. They might offer suggestions on the English Club regarding things that might be happening on campus that would be good partnership opportunities. They could connect us in interesting ways to the other things happening in the Chattanooga area or the state of Tennessee that we might not know about. It is to be an opportunity for them to think about how they want to shape their experience as students at UTC.”

Dr. McCarthy hopes that the formation of these two new groups will create a greater sense of democracy and community within the department. As it stands, the only student group particular to the English Department is Sigma Tau Delta, an Honors Society with qualifications for joining such as a minimum GPA and at least a sophomore standing.

A welcome party is scheduled for 9/18 to gather students to discuss the formation of the Steering Committee and English Club. Further details are to be released then.

Dr. McCarthy has been teaching literature with UTC for 8 years and became department head over the summer. His research focuses primarily on Shakespeare and early modern English literature. When Dr. McCarthy is not teaching he spends time with his wife and children, enjoying music, travel, and cuisine.