This blog post was authored by Trisha Daugherty, an intern in the Library’s Special Collections unit from the UTC Department of History in Summer 2021.

When I enrolled in the internship program here at UT Chattanooga, I hoped that I would find the answers to some questions that I had. I have always wanted a career in the library field, but before this internship, I did not have any ideas as to what that would look like. Thanks to Carolyn Runyon (Director of Special Collections) and her amazing team in Special Collections, I spent the summer learning more than I had anticipated, and feel more secure in my career goals. 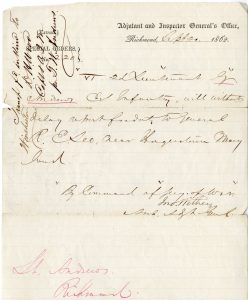 As a History major, I am most interested in the historical conflicts that have involved the United States. When the time came to select my project, I was drawn more towards the one about Garnett Andrews, a colonel in the Civil War for the Confederate States of America. After the war concluded, Garnett Andrews and his family initially settled in Mississippi, then moved to Chattanooga, where he served as mayor from 1891-1893. My project was to create finding aids for ninety-six documents relating to Garnett Andrews, most of them concerning his military career. The finding aids are the tools that help a user find the information they are seeking in a collection. As students, we probably don’t give this a lot of thought when we are searching for information for our research papers, but along the way, an unseen person in the library created those finding aids to make the search easier.

I started out with a blank spreadsheet that I would input all my information on, then some of that would be transferred to ArchivesSpace later in the project. For each document, I had to decide how it would be categorized. For that task, the Getty Art and Architecture Thesaurus is used. It ensures that you are using the proper term. From the documents, I was able to pull the location, corporate entity, and the creator. Then I consulted the Library of Congress Name Authority File (LCNAF). This site would tell me exactly how these items should be entered into my spreadsheet. After I had some key pieces of information filled in, it was time to transfer it over to ArchivesSpace. Here I would enter information about the collection in general, that included some biographical and historical background, the conditions governing use and access, and the processing information. One of the last things that I had to decide on was which of these documents were worthy of digitization. It was important to take into account which of the items would be most valuable to future researchers. I thought the most important parts of the collection were the documents that pertained to his military career, so that is what I selected for digitization. 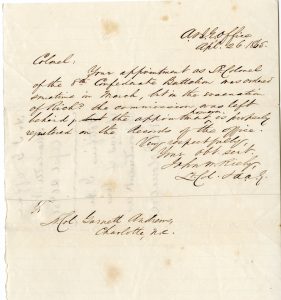 Military commission conferring rank of lieutenant colonel on Garnett Andrews in the Army of the Confederate States of America. Courtesy of the Chattanooga Public Library and University of Tennessee at Chattanooga Special Collections.

Throughout the internship I met with Carolyn once a week and she gave me feedback on the work that I had completed. I was also given the instructions as to how to proceed with the next step on my project. Honestly, there were some weeks when I left those meetings and thought that what I had just been assigned did not seem like a large amount of work, but some of it is more time-consuming than others. I saw the values in breaking down the project into several manageable steps. It also reminded me that higher quality work at a slower pace is more important than rushing through the steps and finding careless mistakes along the way. I am grateful to Carolyn and her team for this opportunity to gain some experience in this field. This internship has solidified my ideas about my career path. Providing that life does not throw any more curve balls in my direction, next fall at this time I would like to be working on my M.L.I.S or my M.I.S., depending on which program I choose for graduate school.