The Journey of an Elevator Pitch

Two recent UTC COB graduates competed in the Southeast Entrepreneurship Conference, hosted by the University of Tampa, on February 1-2, 2013. Out of a total 26 venture pitches made by students from across the southeast, Peter Sauska (String Advantage) and Josh Kapellusch (KAR, Inc.), were part of the seven that made it to the final round! Peter then won second place with a price of $1,000 for his venture. 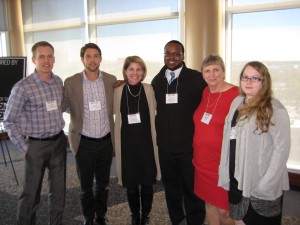 Members of the CEO Club at the Tampa competition.

How did they get here?

UTC’s Collegiate Entrepreneurs’ Organization (CEO Club) hosted their first ever Elevator Pitch Competition, open to all students at UTC. Winners would receive capital support and practical guidance for their venture creation made possible by The Company Lab and Lamp Post Group.

Round 1 — On November 28, 2012 eleven out of twenty-three applicants were chosen to participate in Round 1 where UTC COB faculty judged each team on their 90 second pitch of their start-up business idea. Six teams advanced to Round 2.

Round 2 — On January 16, 2013 those six teams competed once again presenting their 90 second pitch in front of new judges from The Company Lab, Lamp Post Group, and Sterling, Inc. The two winning teams include String Advantage, Peter Sauska and Carlos Garcia, who won first place and received an all-expense-paid trip to a regional CEO pitch competition at the University of Tampa, a scholarship of $2,000, and three hours of free consulting services provided by The Company Lab, a start-up support network which developed the Gig Tank and “Will This Float?” entrepreneurial competitions.

KAR Inc., Joshua Kapellusch, was the runner-up that also received an all-expense-paid trip to the regional CEO pitch competition in Tampa courtesy of The Company Lab and Lamp Post Group. 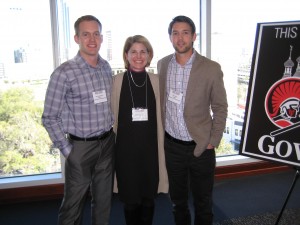 The two rounds of the pitch competitions in Chattanooga prepared both Peter Sauska and I very well for the pressures to come in Tampa. In Tampa there were 26 competitors in the competition which was split into two groups that first pitched on Friday.  I was nervous, but I felt confident in my business model and overall idea compared to my competition.  My major advantage is my speaking ability under pressure as well as having a real value-creating product/service that can be widely implemented right away.  I was the wild-card entry into the final round – I was so excited and Dr. Bev Brockman was very proud that her two students from UTC had advanced into the second round! Although I didn’t win the competition, I did feel like a real winner because of all the preparation and support I received from UTC.

As far as the competition, I felt that Josh and I were both very confident about our pitches even though we had to do it in front of close to a hundred people, and a panel of judges that were already succeeded entrepreneurs. I felt like we were on “Sharktank”, the TV show. The surroundings, environment, and people just were so professional. Our success definitely had to do with our preparation and pre-competition training. In the semifinals, all 26 contestants had 90 seconds to win the judges and get selected for the finals. I wasn’t even nervous; I was excited and knew everything in and out. I have to say that Lamp Post Group’s consulting that I won in Round 2 was absolutely fantastic. I got to meet with the partners and have an open discussion about my whole business plan and how to make my pitch even better was priceless. It definitely made a difference. Just like in sports, you play as well in matches as you have trained for it. The better the training the better the outcome.