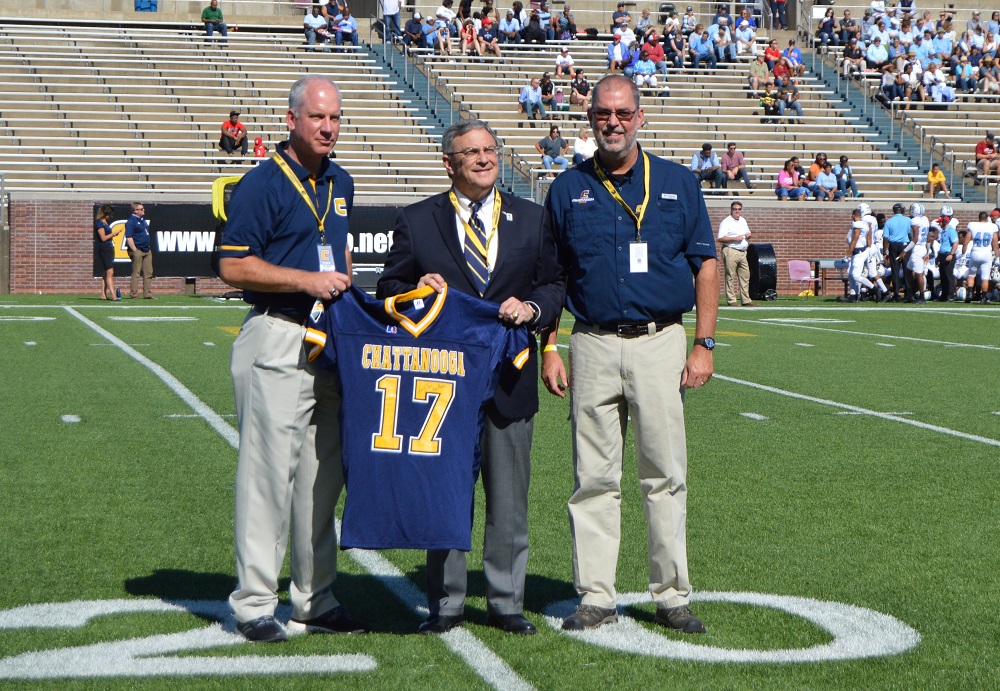 On Saturday, October 21, the College of Business and UTC Veterans Entrepreneurship Program honored Major General William B. Raines (Retired) as the 2017 Military Appreciation Game honoree. Gen. Raines was honored for his long-time support of the Veterans Entrepreneurship Program. The VEP is hosted by the College of Business and is designed to help military veterans launch or grow their own businesses.

About Gen. Raines: Gen. Raines is the sole owner and chief executive officer of The Raines Group, Inc. a commercial real estate management, leasing and brokerage company based in Chattanooga, TN. He retired as a Major General from the Army Reserves in April 2000 after 32 years of services. His last assignment was to the Joint Forces Command (JFCOM) in Norfolk, VA as the Vice-Director of Strategy, Requirements and Integration (J8V). He was commissioned a Second Lieutenant in 1968 at the U.S. Military Academy, West Point, NY where he also received a B.S. in Engineering. He is also a graduate of the Airborne School and the Army War College.

With 32 years of military service, he served in many important positions on active duty and in the Army Reserve. From June 1968 to June 1973, Gen. Raines served in numerous active duty assignments in Okinawa (Hawk), Vietnam (Battery Commander on the Demilitarized Zone) and Fort Bliss, TX. After leaving active duty, he held numerous assignments within the 3397th U.S. Army Reserve Garrison in Chattanooga, TN and the 125th ARCOM Headquarters in Nashville, TN. He returned to active duty during Operation Desert Shield/Storm where he served as the Commander of the 3397th USAR Garrison from Chattanooga at Fort Campbell, KY from August 1990 to September 1991. Under his command, the unit was presented the Army Superior Unit Award.

About VEP: Now in its seventh year, the VEP at UTC places select veterans into a three-part, hybrid learning program using online education; a classroom style, eight-day “boot camp” on the beautiful UTC campus; and a comprehensive mentorship and follow-through phase supported by successful business professionals. This program is FREE and offers information, practical training and ongoing support to help participants succeed. Applications are now being accepted for the VEP class of 2018. To learn more about this program or to apply, go to www.utc.edu/vep.