The cover article of the January 2015 issue of Aerospace America, the monthly publication for members of the American Institute of Aeronautics and Astronautics (AIAA), emphasized the need for increasing the use of computational fluid dynamics (CFD) in future aerospace-related research. The article also makes the point that the aerospace community will require better collaboration among private industry, government agencies, and universities¹. Reduction of both industry research groups and government research funding are two of the primary drivers of the new emphasis on collaboration, and this need is especially true for university research in the aerospace/defense/energy sectors. In keeping with this theme, researchers at the UTC SimCenter have begun to work with the research team at the Purdue University compressor lab facility. Drs. Robert Webster and Kidambi Sreenivas are spearheading the effort for UTC; Dr. Nicole Key, director of the compressor lab, is their counterpart at Purdue. Dr. Sreenivas recently presented a paper at the 54th AIAA Aerospace Sciences Meeting, which is part of the annual AIAA SciTech Forum. This paper highlighted some initial computational results that were compared to experimental data taken from the compressor rig at Purdue².

Dr. Key is a well known and respected researcher. She is an associate professor of mechanical engineering at Purdue, an associate editor of the Journal of Turbomachinery and the Journal of Propulsion and Power, both of which are archival journals published by the American Society of Mechanical Engineers (ASME) and the AIAA, respectively. She was also recently elected to the rank of associate fellow of the AIAA. Dr. Key was quite familiar with former SimCenter directors Drs. David Whitfield and Tim Swafford, as well as the research team, through mutual contacts at the NASA Glenn Research Center in Cleveland, OH. Additionally, she and Dr. Webster were among the inaugural members of the AIAA Gas Turbine Engine Technical Committee. This interaction and mutual respect created the desire for the two institutions to form a collaborative relationship. In terms of this collaborative effort, Dr. Key noted: “It takes a lot of skill and expertise to obtain meaningful computational results for multistage compressors, and this is not something I have been able to do at Purdue. Our focus in my lab has been acquiring very high-quality data in high-speed rotating machinery, which has kept us busy. That is why I am so happy to team up with the SimCenter. The results that Robert and Sree have obtained so far show a lot of promise that we will, in fact, be able to use their model as a means to complement the experimental data to better understand the flow physics in these types of machines.”

Computational simulations are, in addition to experimentation and theoretical analysis, a means of obtaining insight into the complicated physics associated with the operation of real-world engineering systems. In the past, computational and experimental groups have worked somewhat independently of each other. Since each methodology has its own strengths and weaknesses, an emerging new paradigm is for the two groups to work together, combining their strengths while helping to mitigate their respective weaknesses. The computational research team here at UTC is excited to be working directly with one of the few experimental turbomachinery facilities in the country. Both teams feel that, through their combined efforts, the future is bright for basic and applied research involving gas turbine engines. These research efforts will directly impact key parts of both the aerospace (civil and military) and the domestic power generation industries.

The figures below are to give an idea of the flow field within the compressor. The first one is a view of the computational model of the actual test compressor. Air flows across the circular inflow plane and passes over the nosecone, entering an annular region. The air then passes through alternating rows of rotating blades (red) and stationary vanes (blue), before exiting through the outflow plane. The last two figures are depictions of the wake structure and the increasing pressure, respectively, as the air flow passes through the compressor. The rotating blades are moving from the bottom toward the top in the last two figures (counter-clockwise in the first figure). Results of this nature were presented in Ref. 2.

View of the computational model of the actual test compressor 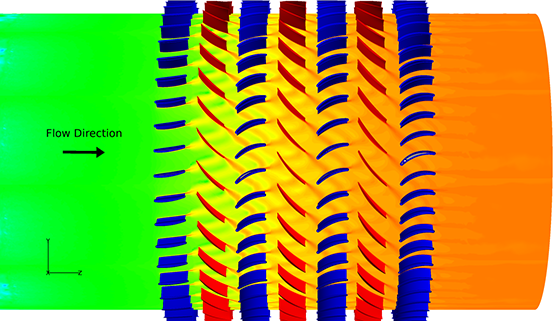 Depiction of wake structure within the compressor 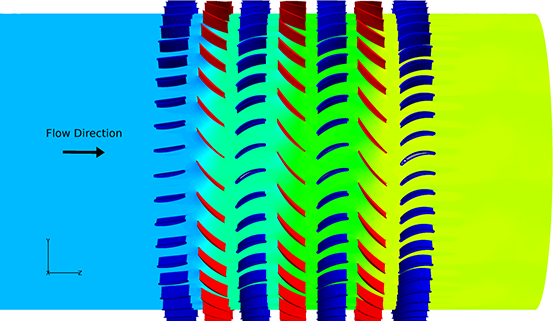 Depiction of the increasing pressure within the compressor

The work was supported by a grant from the Tennessee Higher Education Commission administered through the Center of Excellence in Applied Computational Science and Engineering.