Holley Beeland
September 21, 2016 No comments yet 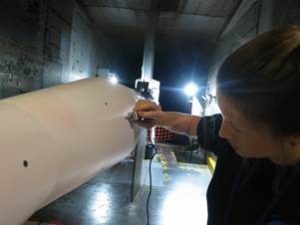 Two Mechanical Engineering grads in the College’s 2008 Class are breaking new ground in aerospace research and in entrepreneurship.  Lincoln County, Tennessee native Nettie Roozeboom is an aerospace engineer with NASA’s Ames Research Center in California working with fellow innovative researchers to test new aircraft designs that could cut fuel use in half, reduce pollution by 75%, and remove noise to nearly one-eighth of what it is today.  Following her graduation from UTC, Nettie earned a Master’s Degree in Mechanical Engineering from Stanford University and began her career at NASA.

By testing pressure sensitive paint (PSP) on scale model aircraft, Nettie and her team are working to determine how pressure is distributed across the surface of an aircraft as it moves through the air.  Nettie and her team use PSP as one of many tools to evaluate the performance of new aircraft designs. In commenting on the use of multiple technologies to address aircraft design challenges, she said, “ when you start to marry multiple technologies to arrive at the best answers, I think you can walk away knowing more.”

In addition to her work with NASA, Nettie is also focusing on the development of a new product she believes can change the way students conduct science experiments in the classroom.  In describing her design, Nettie calls it “the Swiss Army Knife of science tools.” The tiny product can measure a variety of variables including acceleration, force, angular velocity, magnetic field, pressure, altitude and temperature using its five different sensors.  Supported by a Kickstarter campaign that has already exceeded it $25,000 goal, the company producing Nettie’s design, Myriad Sensors, has seen promising results with additional financial backers weighing in.  “We’d love to go beyond our goal and make manufacturing easier,” she said, adding, “then we could get more Pocket Labs in the hands of students and teachers making standard physics experiments more accessible to all.” 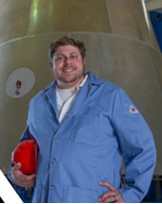 In describing his responsibilities, Justin says, “There’s a lot to my job, but basically, rockets are made up of a lot of pieces, and I figure out how to build some of those pieces. I also decide who needs to do what job to make those pieces come together as a rocket. I like to think of it as getting to play with Legos all day – just very large, complex Legos that travel at speeds of more than 17,000 miles per hour.

One of the things I like most about my job is developing the tools and processes NASA needs to achieve the challenging objectives that come with building such a massive rocket. The Space Launch System is scheduled to fly no later than November 2018, and I look forward to seeing it launch. My work is built into this vehicle, and I want to see it succeed.”

Originally from Dayton, Tennessee, Justin decided to follow in his older brother’s footsteps and pursue an engineering career. He claims that watching a lot of episodes of “MacGyver” may have had something to do with that decision.

When commenting on his work at NASA, Justin explains his hopes that his young daughter, Finley Kate, will be proud of his efforts which he hopes will inspire her generation to explore Mars and other planets in our solar system.