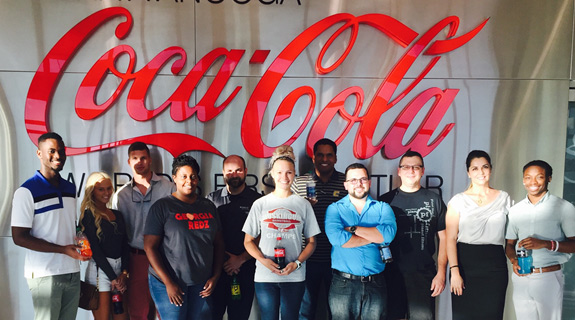 Ten students had the privilege of touring the new Coca-Cola UNITED distribution and sales facility in Chattanooga on October 6, 2016. Arranged as part of his Facilities Management course, Dr. Aldo McLean scheduled the tour to help illustrate the concepts students learn in class. “The ability to observe such processes in action is invaluable to students’ education,” he said.

The new Coca-Cola UNITED facility—boasting over 230,000 square feet of warehouse and 40,000 square feet of regional offices, a fleet maintenance shop, and truck wash bay—opened in March as the Tennessee Valley Division headquarters for distribution and sales. According to Brad McCallie, an employee of Coca-Cola UNITED for over 25 years and the group’s guide for the tour, the facility is built to package some 13 million cases per year. Currently, it’s moving around 11 million—between 25,000 and 60,000 per night or an average of 5,600 per hour. “The pace of production for the Coca-Cola company was non-stop the entire time of our tour,” said Emily Brown. Brian McCoy described it a bit more succinctly as “mind-numbingly fast.”

The star of the state-of-the-art facility is Vertique, an innovative automated warehouse picking system and the first of its kind in Coca-Cola UNITED facilities. McCoy described it as “three robots playing a fast game of Tetris to build the pallets with an assortment of products.” “The most amazing thing though was the efficiency,” he said. “It’s an amazing dance to watch, things are always moving and no one person knows what is what or where it goes…but the computer system does.”

Dr. McLean and his students give a special thanks to both Brad McCallie, for the fantastic tour, and Mike Suco, Vice President of the East Region for Coca-Cola UNITED, for making the tour possible. “This was a special and very informative tour,” said Dr. McLean, who hopes to have the opportunity to return to the plant with future students. His goal for such tours—here and other nearby manufacturing and distribution facilities, such as Volkswagen Chattanooga and Amazon Fulfillment Center—is to enhance students’ classroom learning with hands-on, tangible experience. “Tours like these,” said Dr. McLean, “help solidify their education and take it to the next level.” 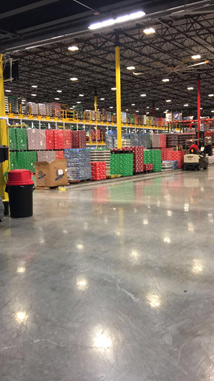