Computational Science Student of the Month 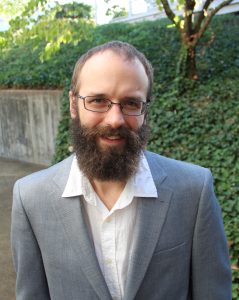 Where are you from?
I was born, in September of 1981, and raised in a small town in the north-west corner of Arkansas called Eureka Springs. I was the oldest of four children born to my parents, Alan and Brenda Hereth. I was homeschooled all through elementary and high school and played basketball and baseball throughout my teenage years. Fairly early on I developed an aptitude for mathematics which played a major role in leading me on the journey which has led me here today. As a  child I also developed an interest in listening and playing music. I began teaching myself guitar and, later, the drums. A group of friends and I started a band in my mid-to-late teens, in which I was the drummer; we amassed a small following in our small town and some of the surrounding towns/cities. Towards our late teens, as we were about to graduate high school, we had to decide to follow our music dreams or pursue higher education. As a group, we decided that we wanted to try to give our musical career a ‘real’ shot before giving up on it and we moved to Seattle, Washington to try to pursue our fame and fortune in the former grunge capital of the United States. While this year was the one of the most important and memorable years of my life, it was ultimately unsuccessful—at least in the musical sense. I moved back to north-west Arkansas for about a year and then to Conway in central Arkansas to begin attending the University of Central Arkansas. After my first year of college, in 2003, I married my girlfriend of four years, Sarah, and began life as a married student. In 2007 I graduated UCA with a Bachelor’s degree in Applied Mathematics and decided to pursue a Master’s degree in the same subject, at the same institution. I received a GTA to fund my Master’s degree studies, and for two years I taught various undergraduate courses while completing my course work. In the fall of 2009 I graduated with a M.S.; I straightaway began my Computational Engineering Ph.D. program as a GRA at the SimCenter at UTC. After two years, in 2011, I took a full time job as a Research Associate at the SimCenter (as a grid generator) and transitioned to a part time student. Finally, in the Fall of 2016—after seven long years—I completed my course work at the SimCenter and obtained my Ph.D. Sarah and I had our first child, Gabriel Alan, in July 2007 and our second son, Jude Isaiah, in October 2008. Then, in June of 2010, we had our third child and first daughter, Lael Sophia; finally, in October 2014, we had our fourth and last child—our second daughter—Emery Dawn.

What brought you to UTC?
As a masters student of Applied Mathematics at the University of Central Arkansas (UCA), I worked very closely with a dear friend Tayor Erwin. Our advisor was Dr. Clarence O. E. Burg, who got his Ph.D. in Computational Engineering from Mississippi State University in Starkville, MS in 1999, from whence UTC’s SimCenter branched out. He was a contemporary of many of the SimCenter’s current and past faculty, and since he was very familiar with the faculty and research at the SimCenter at the time, he helped Taylor get a summer internship at the SimCenter (I believe it was the summer of 2009) which Taylor enjoyed thoroughly. Taylor came back to UCA excited about the research he was exposed to and the people he was able to work with. He decided to apply to the Ph.D. program at the SimCenter, and, since I did not have anything else lined up, I decided to apply as well. I was fortunate enough to be accepted into the Ph.D. program, along with Taylor, in the Fall of 2009, and, long story short, that is how I ended up at UTC.

What research are you working on?
I am interested in many different things related to computational engineering, especially grid generation and high performance computing (HPC). I have written multiple two and three dimensional CFD solvers and been involved in many aspects of past and present grid generation research at the SimCenter. My Ph.D. research involved developing an automatic parallel grid generation and simulation framework with a focus on automated urban simulation. This research uses a linear forest-of-octrees approach to enable the efficiently parallel and automatic grid generation functionality while implementing a simple Navier-Stokes solver—with buoyant terms to take into account temperature driven convection—and an LES turbulence model and contaminant transport functionality to simulate urban phenomena and plume transport. Towards the end of my Ph.D. studies I became more involved in HPC administration at the SimCenter and began to develop a better understanding and interest in the ways that HPC hardware and software enables efficient computational engineering research.

What are your plans for the future?
This is the question on our mind right now. I have finally finished my long and arduous Ph.D. program and I am now beginning to think about the future. I am interested in many aspects of this science, so it makes for more and broader opportunities. I am open to jobs involved in HPC hardware/software, computational engineering, grid generation research, software devolvement, etc. The most important thing to me, in the future, is that I want to really enjoy what I do. Only time will tell.

What are your interests and hobbies?
That’s a hard question; for the last few years I have not had much free time for these things. I have always really enjoyed flying remote controlled helicopters and quad-copters. I would love to build my own one day. I also enjoy furthering my understanding of various programming languages/concepts, i.e., C++, MPI, programming for GPUs etc. Hopefully, in the near future, I will be able to find more time for stuff like this. My children take up and significant portion of my ‘free’ time. I need to enjoy them while I can; they will be grown before I know it!

Does your experience at UTC meet or exceed your expectations?
All said and done, my experience here at UTC has been precisely what I needed/wanted it to be—for the most part. There have been many ups and downs along the way, but my overall experience here has been very positive. It has been great to be a part of a team that works together instead of competes against one another. Many of the professors, colleagues, and mentors I have come into contact with along the way here have made life-long impressions and have helped me along my journey to here, where I am today.