A love engineered with adventure and gratitude – David and Dottie Sorrick 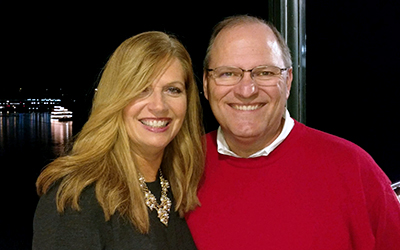 During the summer of 1983, sophomore David Sorrick struggled to stay focused in his physics class at Holt Hall. Fortunately, a smart, cute, brunette student caught his attention and sparked his interest in the course.

David, an electrical engineering major, and Dorothy “Dottie” Ayres, a double major in industrial and mechanical engineering, did not see each other much following their summer physics class until becoming reacquainted in an engineering economics class months later. This time, both made an effort to get to know one another—bonding over mutual classes, interests and friends. One of Dottie’s best friends had gone to high school with David.

It was not until David surprised Dottie at one of her university rowing races in Knoxville, however, that she knew she wanted to spend even more time with him, in hopes of their relationship growing.

Set to scenes of football games with friends, study sessions in the library and movie dates, the couple’s love story flourished their senior year. David proposed in the fall of 1986 by casually asking Dottie for a drink of water with ice. When she took the ice tray out of the refrigerator, the ring was in one of the squares. 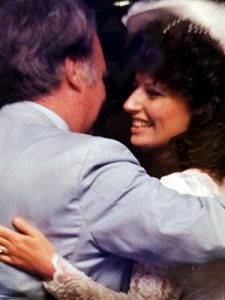 David and Dottie graduated in December 1986 and married in July 1987 at First-Centenary United Methodist Church, just off campus. Though the next 30 years have been filled with 13 moves, two daughters, one U.S. patent and numerous jobs, the couple’s love for UTC and each other has only grown.

“Going through the UTC engineering program taught us how to think and solve problems,” Dottie says. “It doesn’t really matter where you are in life or what task is at hand, this training and education can always benefit you and others. It’s helped us tackle each day together.”

Prepared to take on life move by move

After graduating from UTC, David and Dottie took jobs at Tennessee Valley Authority (TVA). David worked for the Nuclear Department and supported its plants, including the one where Dottie worked. Dottie was hired as the first female mechanical maintenance engineer at the Sequoyah Nuclear Plant. Being at the same place on occasion was advantageous for their new marriage as they both put in long work hours.

The Sorricks made their first move in October 1989, relocating to St. Petersburg to work for Florida Power (now Duke Energy Florida). Based on David’s job assignments, their many transitions soon followed. From Florida to Georgia, back to Florida and then to North Carolina, David and Dottie welcomed every new adventure.

“As I progressed through the organization, we moved many times,” David says. “Dottie was supportive of every move. In fact, she managed our most complex problems of packing and unpacking.”

While in Florida and Georgia, Dottie developed and conducted a Christian tennis camp for children. She also continued to do various jobs and volunteer work.

The couple welcomed their first child, Ashley, in 1991, and Caroline followed in 1994. Like them, their two daughters are also engineers. Ashley has a mechanical engineering degree from the University of Central Florida (UCF) and is currently employed by Siemens. Caroline will graduate from Florida State University this May with an industrial engineering and manufacturing degree and will start working with Rolls-Royce in July.

Ashley was very interested in attending UTC, following a campus visit with her parents. Living in Tampa at the time, she ultimately decided to stay closer to home and attend UCF.

“We get the wise cracks from people asking if we all sit around with our calculators figuring out problems,” Dottie says. “Far from that—we all love spending our time racing around at Disney!”

When an opportunity presented itself in late 2014 for a return to Chattanooga, the Sorricks jumped at the chance to move home. It was an adventure too good to pass up. David rejoined TVA in January 2015, and he was promoted to the senior vice president of Power Operations in October 2016. He is responsible for the entire non-nuclear generation fleet composed of coal, gas and hydro. Dottie received her first U.S. patent last year, and she is currently pursuing marketing the product.

Thankful for the UTC experience

David and Dottie Sorrick are UTC lovebirds. The couple’s love for their alma mater stems from gratitude for their spouse and for their education.

“I’m certainly glad I chose UTC,” David says. “I met my wife here, and I can’t imagine what life would have been like without her. UTC prepared me very well for life after school, and I’m proud to be an engineer and alum from UTC.”

Article By: Development and Alumni Affairs