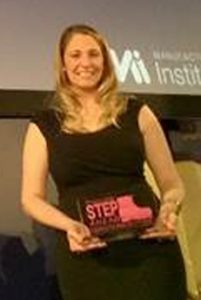 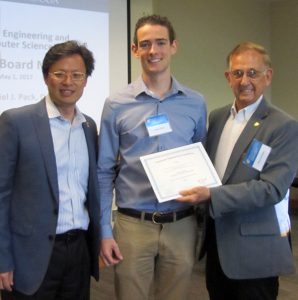 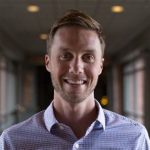 Order of the Engineer

On the evening of April 25, CECS welcomed 27 students into the Order of the Engineer. The Order was initiated in Canada to foster a spirit of pride and responsibility in the engineering profession, to bridge the gap between training and experience, and to present to the public a visible symbol identifying the engineer – the wearing of a simple stainless steel band on the smallest finger of the engineer’s “working” hand.

As a part of the College’s second annual Awards Dinner held on April 18, 52 students were recognized for their outstanding academic accomplishments meriting their selection by the CECS Scholarship Committee as 2017-18 recipients of 91 awards totaling $83,937.  The College is fortunate to have both endowed scholarships and annually-funded scholarships provided through the support of our corporate partners, alumni, individual donors, and bequests.  The recruitment and retention of outstanding students is a primary goal of the CECS, and the generosity of the College’s scholarship donors is essential to accomplishing that goal.  The Awards Dinner also provided the opportunity to thank those donors whose philanthropy is invaluable to the continued success of CECS.  If you are interested in learning how you, too, can support the College’s student scholarship program, please contact Kirby Johnson (Kirby-Johnson@utc.edu), call (423) 425-5940 or visit mocsconnect.com/givececs.

The CECS Awards Dinner featured remarks by Mr. Steve Douglas, Vice President TVA’s Nuclear Division and member of the College’s Advisory Board Steering Committee. Remembrances of the late Dr. Frank Jones, Professor of Chemical Engineering, and the late Dr. Ronald Cox, former Dean of the College and Burkett Miller Chair of the Management and Technology, both of whom passed away this academic year, were offered.  On that occasion, faculty from each department were also recognized for their accomplishments within their departments during the past year in the areas of teaching, research, and service.  The following faculty were selected for College-wide distinctions in those three primary areas of the College’s mission:  Dr. Aldo, McLean, Teaching; Dr. Li Yang, Research; and Dr. James Hiestand, Service.  In addition, Ms. Holley Beeland, Graphic and Web Support Coordinator of the College and the SimCenter, received the College’s Outstanding Staff Member Award. 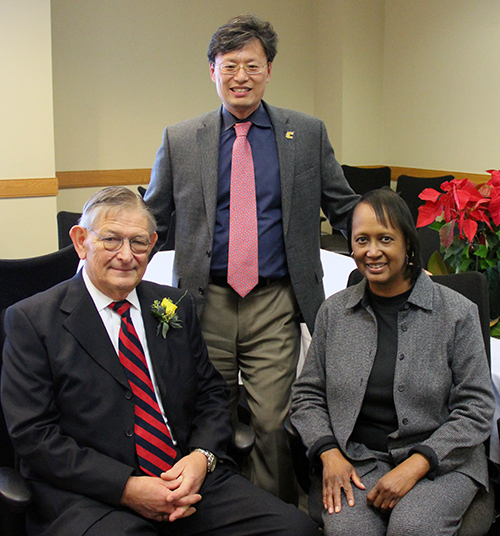 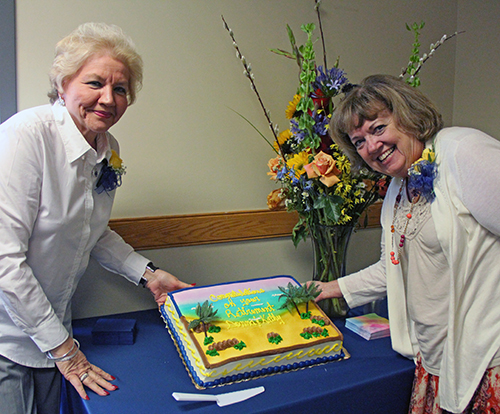 Ms. Barbara Shepherd, Accounting Specialist for the College, Dr. Phil Kazemersky, Professor of Mechanical Engineering,  Prof. Kathy Winters, Lecturer in Computer Science, and Ms. Donna Adams, Administrative Assistant to the Burkett Miller Chair, were honored at  receptions earlier this year thanking them for their years of service to the College and the University and joining them in celebration of their retirements.

In addition to Ms. Julie David, Director of Student Success, the College welcomed Ms. Andrea Evans to the staff of the College as Budget Specialist.  Mr. Jason McDowell has also joined the CECS staff as a member of the Tech Staff, and will soon be joined by Donald Walker, who will assume the post of Design Support Technician.