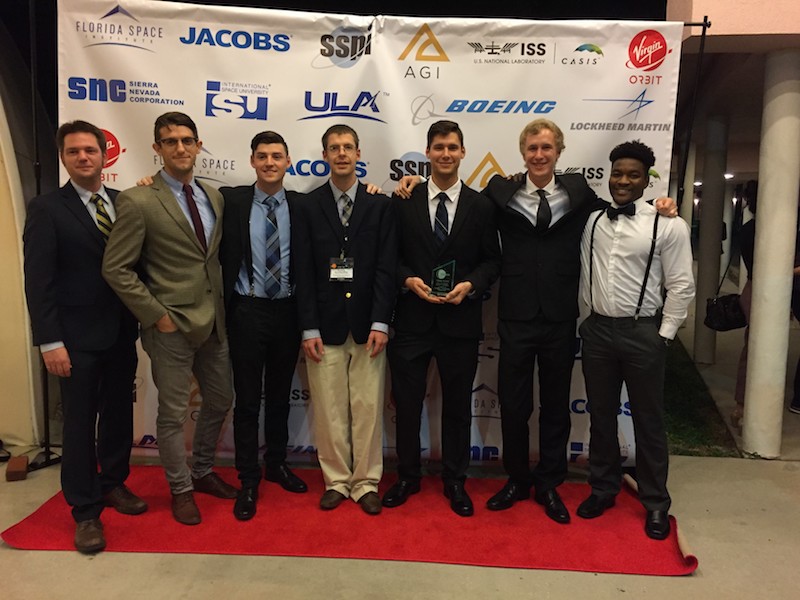 In the inaugural “launch” of the CECS Rocket Team,  aka the Rocket MOCS, placed third in the nation in the University Student Rocketry Challenge. With a focus on  exploring aerospace concepts and design, the College’s students, mentored by Assistant Professor of Mechanical Engineering Dr. Trevor Elliott, participated in the competition sponsored by Students for the Exploration and Development of Space. Forty teams from across the nation competed with scoring of each multi-stage rocket conducted by a panel of aerospace professionals from companies such as Unite Launch Alliances, SpaceX and Sierra Nevada Corp.  One judge noted that the top three contenders were clearly set apart from the other teams and final placement came down to a very small point margin.

“I couldn’t be happier for them,” said Dr. Elliott. “They represented UTC and the College very well against well-established competitors and aerospace programs.”

First place in the competition went to the University of Missouri and second place was Arizona State University.

The UTC rocket was built in conjunction with a senior-level design course in which the team developed models, performed simulations, constructed prototypes, completed test launches and analyzed post flight data.

“The idea of studying rocket propulsion for a class project started out as an intimidating feat for our team,” says Design Team Leader William Reynolds. “As inexperienced undergraduate students, we learned that we have been given the tools to study interdisciplinary engineering applications and came out of this experience with a deep understanding of the field of aeronautics and a passion to continue such work post-graduation.”

Kevin Braziel, the team’s launch control and recovery systems designer, says the competition “opened up new opportunities to learn about rockets, space exploration and developments currently taking place, and even specific companies who combine all these and more into inspiring careers. …  I personally hope that this incredible experience might eventually lead me on a path to a career in the aerospace industry.”

To read a synopsis of the team’s work and see its design portfolio, go to: http://utcseds2017.weebly.com.