By Laura Bond,  Staff Writer, Office of Communication and Marketing, The University of Tennessee at Chattanooga 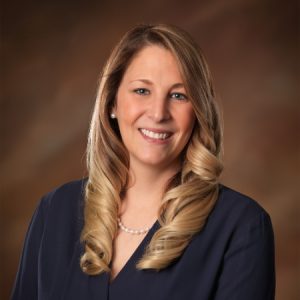 It was a high school physics teacher that helped Ashley Poe Thompson find her calling.

A love for cooking led to an early interest in chemistry, but learning more about chemical engineering from her teacher helped steer her in the right direction.

“He really opened my eyes to what chemical engineering is and what engineers can do, which is pretty much anything. Engineering is a wide and diverse field of study. There’s a lot of different aspects you can get into,” said Poe (’13).

Thompson has come a long way since her high school days. After graduating from UTC, she accepted a fulltime job as a process engineer at BASF, the second-largest producer and marketer of chemicals and related products in North America.

“My job is focused on making sustainable, efficient, cost-effective products for our customers and community,” she said. “I had an internship at BASF before I was hired on fulltime, and I really fell in love with manufacturing. I love working in a plant, getting hands-on experience instead of sitting behind a computer all day.”

Thompson was also recognized as an Emerging Leader in the industry at the National Association of Manufacturers’ 2017 STEP Ahead Awards. The association’s Science, Technology, Engineering and Production (STEP) Ahead initiative was created to showcase the impact and highlight the achievements of women in manufacturing. Thompson was one of only 30 women to receive the award.

“I knew I was nominated for the award, but getting it was a big surprise. The nominees included women from various roles, from CEOs to site directors to process engineers like me. I was honored to stand alongside a lot of women that have made huge impact in their career,” she said.

For Thompson, it wasn’t just the skills she picked up in her engineering classes that have helped her throughout her career. She cites the networking opportunities and the communication skills she learned through group coursework as well.

Being a woman in the manufacturing industry often means that Thompson is “the only woman in the room,” but she encourages other women to get involved in traditionally male-dominated fields.

“As women, we have a great opportunity to make an impact in manufacturing. We bring a different outlook on things,” she said.

“Being the only female student in classroom is not always a bad thing. You get to make an impact in your own special way.”