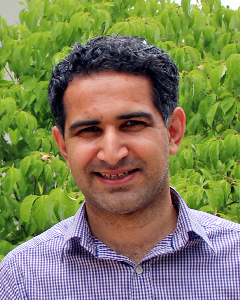 Where are you from?
I am a Persian Iranian who used to live in Tehran the capital of Iran. My mother tongue is Farsi. Growing up I was always interested in electronic devices; my toys never survived more than 24 hours from my curiosity. My parents once advised me to become a textile engineer but that was not my choice and I won that battle. I received my diploma in electronics and did an internship with the Samsung Company. I immigrated to Manchester in the United Kingdom to continue my education however, I moved to London a few months later to fulfill by ambitions and pursue my Bachelor’s degree. After graduation, I completed my Master degree, and started to work in London and gained British citizenship several years later.

What brought you to UTC?
In October 2015, I attended a conference in Boston, Massachusetts to present research about wireless power supply for implant devices. At the closing ceremony of the 5-day conference, one of the conference organizers approached me and was interested in my work. He took my details and later on introduced me to a professor from UTC who recruited me for the PhD program. My Initial plan was to look for opportunities in the UK since I wasn’t sure about another immigration. However, my wife motivated me further for this opportunity and we eventually decided to accept the offer. I am glad to be here and have been meeting many supportive and lovely people at UTC, the SimCenter and in the US.

What is your educational background?
I received my bachelor’s degree in Electronic Engineering and Master’s degree in Aerospace Engineering from London Queen Mary University in the UK. The Masters degree challenging because I had to study unfamiliar subjects since my background was in Electronic Engineering. After my Master’s, I applied for PhD in Computational Science and recently became first PhD candidate in Computational Science at UTC. It involves advanced computational science design, modeling, simulation, and analytics for interdisciplinary areas. It also requires a high level of programing languages; something that I was trying to avoid in the past and didn’t have chance to practice for my bachelor and master degree.  But I enjoy challenges and have been learning a lot so far since I began the program.

What research are you working on?
Currently, I am working on developing a family tree algorithm to estimate yeast’s cell replicative lifespan from time-lapsed microfluidic images which can be used in biomedical fields and diagnosis.

What are your plans for the future?
I am learning every day through my studies. I love to use my knowledge and expertise in medical fields where that can improve health and life quality of people. This could be in industry or academia. I also like to have my own charity beside my work when it is feasible.

What are your interests and hobbies?
I am interested in life and daily activities in space. I remember when a European research team launched a project called “Mars One” for establishing a permanent human settlement on Mars they were looking for volunteers for one-way ticket to Mars. I was very curious about it and I reached the second round and received a request for 15-minute video about myself. But as I was getting married at that time and my father-in-law put only one option on the table I didn’t follow through. I am also interested in different cultures, music, and I play a traditional Iranianinstrument called “Santoor”. I enjoy sport activities, and used to play soccer as a member of University team and didn’t really care for tennis. But now, it is almost the opposite; I love to play and watch tennis. This has actually taught me how to avoid pre–judgment in my life.