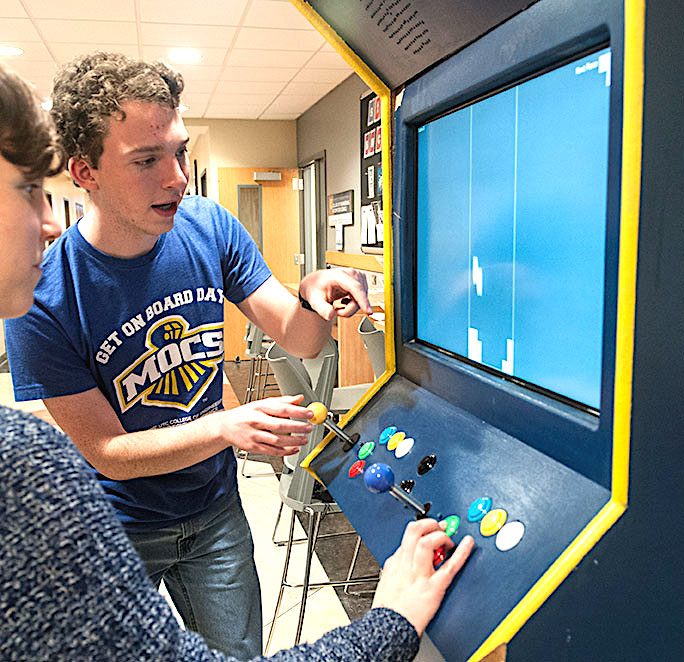 On the third floor of the Engineering, Math and Computer Science building, just down the hallway from the common area where students quietly sit and study, is a blue-and-gold cabinet.

“Mocs Arcade” is stenciled across the top façade, and Power C’s are painted on both sides. In the center is a video screen with joystick controls below. Red, green, blue, yellow and white buttons are alongside the joysticks.

It’s a familiar sight to anyone who has ever been inside a video arcade, but the games will be unknown to about 99.9 percent of the population.

“Banana Bomber” is a two-person game in which gorillas try to “bomb” each other with, yes, bananas and try not to get blown up at the same time while finding “power” bananas to keep them going. “TwoTris” is a variation on the familiar “Tetris,” except two people can play it at the same time.

The games and their graphics are somewhat rudimentary, but that isn’t the point. Four siblings—Andrew, David, Grace and Connor McPherson—have been heavily involved in creating and updating the games as well as adding new features to the arcade cabinet since it was originally built three years ago by Andrew. The four are or will be UTC graduates, and all majored in some facet of engineering or computer science. 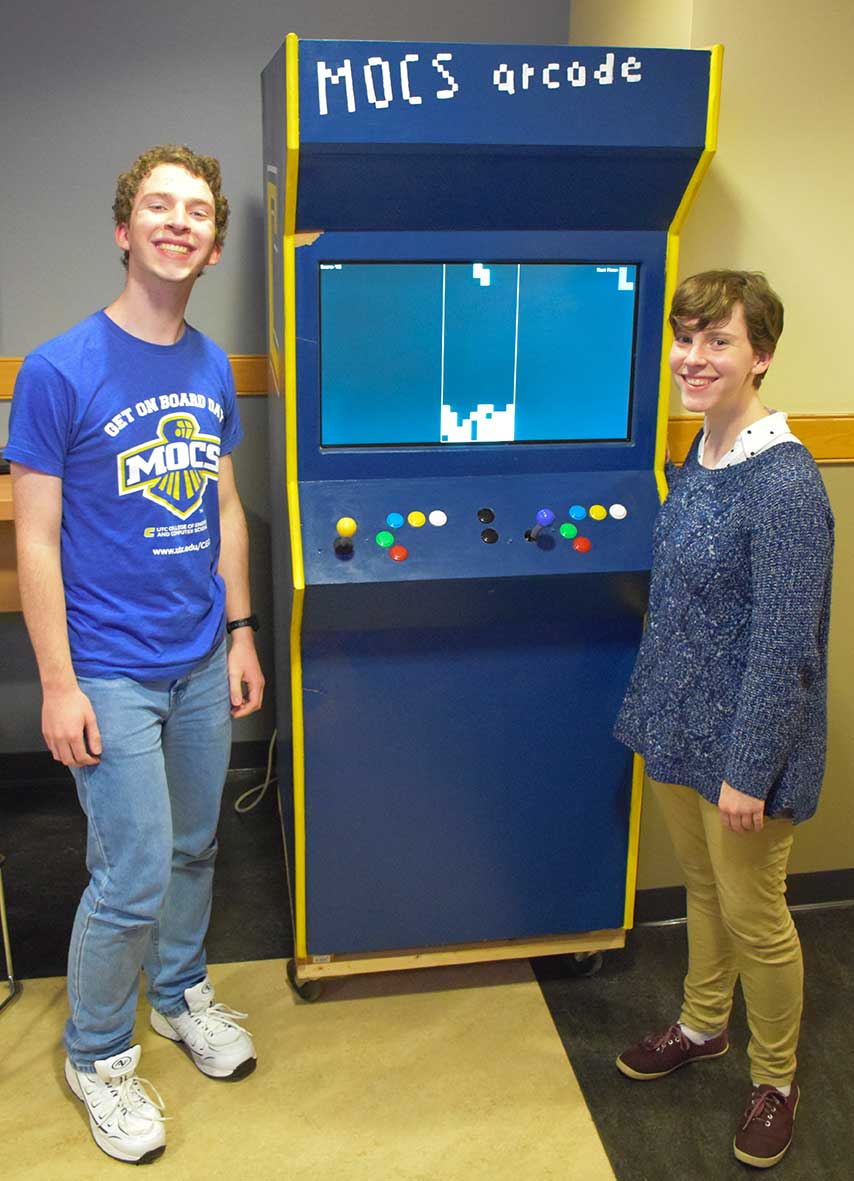 Connor and Grace McPherson. Grace graduates Saturday with a degree in computer science.

Grace, 21, who graduates Saturday with a degree in computer science, worked on a team with four other students to create “TwoTris.”

“I am extremely proud of the team,” she says. “It was an amazing group and wonderful experience.”

But simply racking up points on the games isn’t the goal, she and her siblings say. The plan is to throw down the gauntlet for other students.

“I hope that each student takes full advantage of this opportunity to create a game and share it with the community,” Grace says.

Andrew, who built the first Mocs Arcade as an extracurricular activity, echoes his sister’s comment.

“The goal of the project isn’t so much to make games for the arcade cabinet, but to encourage students to make games, be they good or bad regardless,” he says in a video made in 2015.

Although it’s usually in the ECMS building, Mocs Arcade sometimes is rolled out to various events on campus and around Chattanooga. It has visited several Mini Maker Faires, an event held annually in the Tennessee Pavilion that gives local artists, engineers, visual artists, hobbyists and others to show their work. Mocs Arcade always attracts a lot of attention.

“There’s a line of people who want to play the games, a lot of kids. For our students, it’s a chance to talk to them about their future,” says Craig Tanis, an assistant professor in the Department of Computer Science and Engineering who knows the  McPhersons siblings.

While various students and members of CompUTC, the university’s computer science club, have been major players in the maintenance and updating of Mocs. Arcade, the project overall has been something of a McPherson family labor of love—well, for four of the nine siblings in the clan, who range in age from 14 to 32.

“We’ve been something of activists to keep the vision of Mocs Arcade alive. Most often, we started these projects,” says Connor, 19, a junior in computer science who will graduate in 2020.

Andrew, 25, graduated with a degree in computer science in 2015 and is now working in Seattle while David, 23, earned a degree in electrical engineering the same year and is in Berkeley, Calif.

Tanis is impressed that the McPherson clan can produce “a steady stream” of students through the department.

“It’s a testament to their family,” he says.

And the McPherson/UTC connection continues. Their younger brother Luke is a freshman at UTC and pursuing a degree in business and marketing. Their mother, Joyce, also is enrolled at the university, working on a doctorate in education and leadership. Grace, Connor and Luke are all students in the Honors College.

For the McPhersons, technology is a family tradition that goes back a couple of generations.

“I’m pretty sure it started with my Grandpa, who was a computer scientist,” says Connor. “He worked for the Army and Marine Corps on long-distance communications. He made it his goal to get as many of his grandkids into the tech field as possible and, by golly, he succeeded.”

Grace says their mother also was a key player in their career choices and life philosophy.

“We all heard this mantra—”Create, Don’t Consume”—growing up from our mother, who encouraged us to create solutions using whatever skills and materials we are given,” she says.

With Grace’s graduation, Connor is the only McPherson currently working on the game, but stresses that Mocs Arcade is not the property of his family.

“I think it would be an exaggeration to claim any sense of ownership. We don’t own the arcade and I hope no one ever thinks of it that way,” he says. “The arcade is a gift, an offering, a vision, a push for innovation in the Computer Science department. We don’t preserve the arcade for our own sakes.”

Hopefully, Connor says, that community will include other UTC students once he graduates.

“Once I graduate, I will have to pass the baton of the arcade’s upkeep to someone outside of the family. I can only pray an inspired maker will come with their own dreams and ideas to add to the arcade’s rich history.”

For her part, Grace isn’t too concerned about the future of Mocs Arcade.

“I’m not worried about it,” she says. “I know it will do well as long as there are clubs and teachers that continue to encourage students to take full advantage of this platform.”