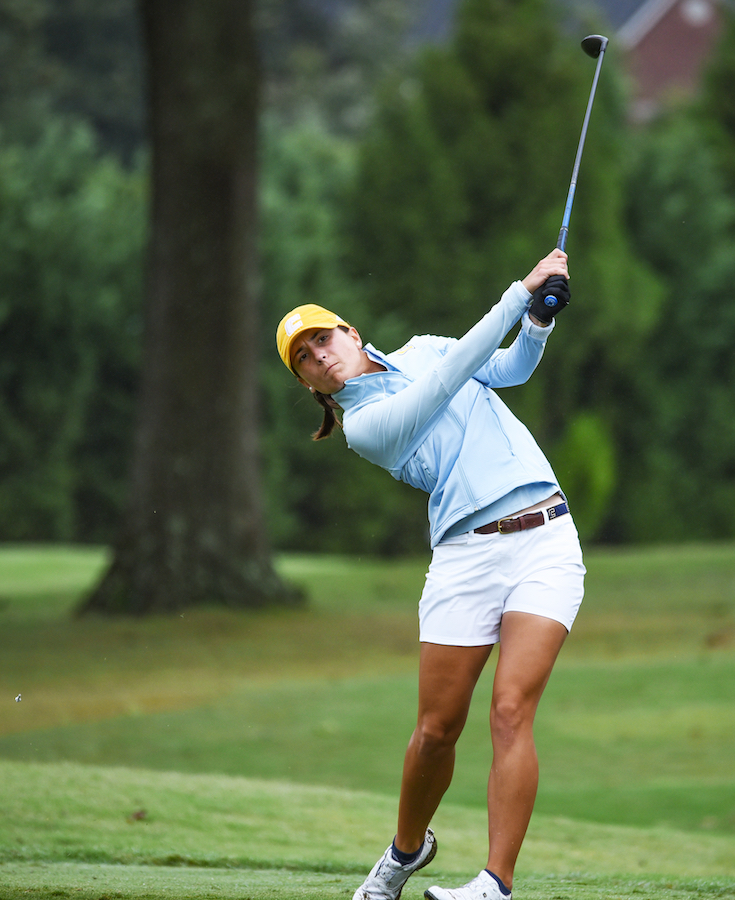 Engineering is a tough major. It involves more mathematics and physics courses than most students want to take or even fully comprehend. It sounds hard, and if you’re not in the engineering field, you might not understand how difficult it is.

Golf is a tough sport to succeed in. You don’t just play 18 holes every Saturday afternoon and suddenly become competitive. To be successful, you must be out there for hours at a time almost every day. And tournaments, especially those on the road, routinely become extended weekends.

Now imagine succeeding in both categories and living more than 4,000 miles from home. While you’re trying to conceive that idea, Monica San Juan has been doing it.

San Juan embodies what a University of Tennessee at Chattanooga student-athlete is all about. On the golf course, she won the individual title at the Southern Conference Championship in spring 2019 and qualified for the NCAA Regionals. In the classroom, she has a 3.85 GPA while studying industrial engineering.

Add it all together, and you’re about to have a college graduate.

“It’s going to be very satisfying,” said San Juan, who will be receiving her diploma during UTC commencement ceremonies on Saturday. “These last four years have been a lot of work, so it’s going to be like getting an award. I’m ready for it.”

San Juan hails from Pamplona, Spain, and college athletics is not a European custom. Growing up overseas, she explained, “It’s impossible to play competitive golf and get a degree at the same time. College sports are not a thing. If you want to do both, you have to come over here.”

San Juan had a few things going in her favor when she first considered crossing the Atlantic Ocean to come to the United States for college. She attended a bilingual high school, Miravalles, which helped her build an English language base. During her high school years, she visited the U.S. to further her English, spending a year in Paden, Oklahoma. She had supportive parents who encouraged her to pursue being a student-athlete. And a friend of hers at Miravalles, Cristina Perez, preceded her by making the trek to Chattanooga to play golf for UTC.

“I didn’t have a chance to come here for a visit, so it was a blind decision,” San Juan said. “Cristina had come here the year before me, and I liked everything she told me about the team, Chattanooga and about UTC. We grew up together; we went to the same school; and we had been playing golf together since I was 10. I decided to follow her footsteps and come here. Having Cristina around was a huge help. She was kind of my big sister here.”

Another person who traveled a similar path was UTC women’s golf coach Colette Murray. A native of Dumfries, Scotland, Murray initially came to the U.S. to golf collegiately for Jacksonville State University in Alabama. She recruited San Juan without seeing her in person.

“We got Monica without a visit, and yes, it was a huge leap of faith. That works both ways,” Murray said. “You hope you’re getting good people, and you know you’re getting good players because the (profile) scores do the telling, but you never know if you’re going to get someone that’s going to quite fit or mesh with your personality and contribute to the culture that you want to have on the team. Monica fit right in. She brought the kind of culture back that we had lost for a little bit.

“A lot of schools will say, ‘Well, you can’t do engineering and play golf because it’s too much.’ When we recruit, we want to make sure all our student-athletes are getting something they want to do once they’re finished. And she knew she wanted to do engineering. So she came here and transitioned like a duck in water. She quickly adapted into the American way of living.”

A key to being able to succeed with the rigors of engineering is time management. While it’s a challenge for everyone, student-athletes have games, practices and travel that frequently conflict with classes, studying, research and lab work. School comes first, but it can be a tricky balance.

“I would say that student-athletes that come through the engineering program are generally the best at time management. They have to be able to manage the studying that occurs so they can stay in progress with their studies,” said Cecelia Wigal, a professor in the UTC College of Engineering and Computer Science. Wigal has been San Juan’s advisor, along with being her instructor for multiple classes. “Monica was probably the best of the student-athletes I have had.

“Golf takes them away and not just for a day. When they have a tournament, they could be out of town for four days; they could be gone from Thursday night and may not be back until late Monday night or Tuesday morning. She was able to stay up to date with the coursework and the course load in industrial engineering. She had me for a lot of her courses, and I’m demanding. Most of my courses are project-based, and she was able to maintain that through the whole time that she was playing golf.”

San Juan agrees that time management is of the essence. Early on, she joked, the hardest thing for her on campus was having to jump from building to building for different classes. After that, it was just a matter of mapping out a plan and sticking with it.

“Yes, there’s a lot of commitment, and yes, you have to commit yourself just to sit down and make sure you study every day,” she said. “Don’t leave anything for the last minute. You need a strong work ethic and have to be able to manage your time. If you have one hour of free time, and I mean ‘free time’ between workouts and a class, use that hour and study.”

She has used those hours wisely. Within the College of Engineering, she teamed with Sarah Thomas to take home top honors at the 2019 Technology Symposium; their “Improving Nurse Scheduling for Effective Emergency Department” project was the top mechanical engineering entry.

San Juan’s academic prowess garnered multiple Southern Conference honors, and she was a four-time Women’s Golf Coaches Association All-American Scholar. And on the golf course, along with winning this year’s conference individual title, her highlights at UTC included three all-conference selections and finishing third in school history in scoring average (75.11).

San Juan’s time in Chattanooga is open-ended for now. While her golf eligibility came to a close in the spring, she remained with the team in a part-time coaching capacity. Following graduation, she will move to full-time employment as UTC’s assistant golf coach.

“Since I first got here, I have had good chemistry with Coach Murray, and I like how she coaches,” San Juan said. “This program has historically been very successful, so there’s nowhere else I would want to be than with the coach that helped me develop as a player.

“I’m enjoying that side of golf, helping the players develop and helping Coach with everything she has to do. I’m going to graduate with an engineering degree, and I don’t like saying, ‘I’m never going to do it again.’ It’s something that I have, and maybe in the future, I’ll use it.”

And the beautiful thing about succeeding in that field are the many directions her journey can now take her.

“Not to downplay coaching, but if someone has the capability of being an engineer, I feel like they should pursue an engineering degree. I know the pay is very different,” Murray said with a laugh. “But Monica’s heart is still in this, and she loves the teammate aspect. She loves golf; she loves athletics.

“There’s no better example to have for your student-athletes than the person that she is. She’s competitive, she’s hardworking, and she has all the best elements that you could want to have someone help and support your program.”

And, as Wigal said: “She’ll be excellent at anything she wants to do. The wonderful thing about engineering is that it’s going to help you. It’s a problem-solving discipline. Wherever she may go, that discipline will be something that she can lean on.”