Story was originally included in the UTC 2019 Endowment Report. 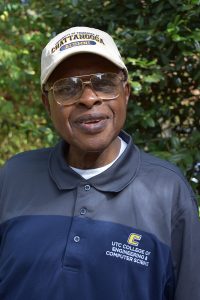 All Hollis Wooten wanted was to fulfill his parents’ wishes and go to college.

His father, Lawson, had a third-grade education. “When he was young, it was about finding a job somewhere,” Wooten recalled. “But my dad told me, ‘Now, you need to know something to land the right job. It’s important to get an education.’”

His mother, Lila Mae, made sure her children didn’t miss school. Getting a C wasn’t good enough; they were supposed to get As.

“My mother always told us, ‘If a job has once begun, never leave it ’til it’s done. Be that labor great or small, do it well or not at all,’” said Wooten, the second of six children. “She taught us that from the time we knew how to talk.”

But getting a higher education did not come easy. His parents didn’t live long enough to share in his academic pursuits (Lila Mae passed away in 1955 when Wooten was 15; Lawson died in 1964), and Wooten didn’t have the financial means to attend college.

The college dream persisted even as he learned different trades, and Wooten started taking classes at UTC shortly after turning 30. While working in a variety of roles at the South Pittsburg Municipal Hospital in Tennessee, he enlisted the support of Dr. James Havron who told him, “Show me your work, and I will see to it that you get a scholarship.” At the end of the semester, Wooten showed the doctor his 3.5 GPA, and the doctor made good on his promise by presenting him with the Stove Manufacturers Scholarship. “It turned out it was the same stove manufacturer that my father had worked for as a laborer,” Wooten said. “And the man in that organization who gave it to me was a patient of Dr. Havron.”

At 35 years of age, Wooten graduated from UTC in 1975 with a bachelor’s degree in engineering. During his distinguished professional career, he worked for the U.S. Department of Energy’s Oak Ridge National Laboratory from 1987 until his retirement in 2005. Along the way, he was married to Elserean (from 1976 until her death in 1997) and Hertistine (from 2000 until her death in 2017).

Wooten is now 80 and at a reflective point in life. He has created the Wooten Family Endowed Engineering and Computer Science Scholarship Fund to celebrate the memory of his parents and spouses. He wants to give others the chance to succeed.

“This is for all of them and not for me,” he said. “Without my mother and dad, I wouldn’t be here. And I would not have been able to be successful without my spouses. They’re the ones who helped me through the years. Most importantly, they were my friends.

“The thing that’s important is that they all should be known; people should remember them. My father and mother could have just been two people who lived and had six children and died, but that shouldn’t be their story. They were more than that; they left something for all of us. They helped me become who I became, and without them, I wouldn’t be who I am.”