Getting to Know You – Karl Fletcher

This month’s Getting to Know You series features Karl Fletcher, Director of IT and Labs 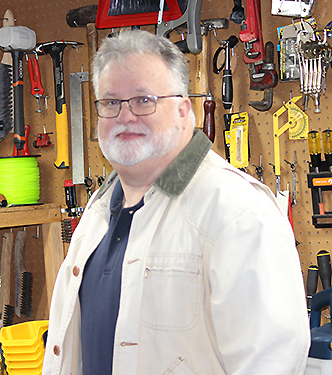 Karl started at the college in September of 1988. A couple changes he’s seen at CECS over the years include a new building and student competitions. His favorite thing about his career? “Student Interaction” he says. His proudest accomplishment has been “Developing a small ag business while growing the college’s tech group from two employees to eight. CECStech did not exist before 1995” said Karl.

Karl’s first job was as a Janitor at Grants department store age 14. I asked Karl what motivates him to work hard, and he replied “I always have, probably my parents and starting in the textile mills at 17. I have been continuously employed since the age of 14. I worked as a survey technician from age 14 until I graduated high school.”

Home is his farm in Lafayette, GA. (Blue Mountain Farms). His Mother and Father are both Korean War Vets, his brother, Jim Fletcher, is a 1985 graduate of our Computer Science program. Jim has been employed as a programmer all over North America since his graduation. Karl has had cats, dogs, and horses. Currently he has two female Calico cats.

What makes Karl laugh the most? “Wit. My father used to say, ‘I refuse to match wits with an unarmed man’” said Karl. When not working, Karl enjoys ‘piddling in his workshop’. His favorite restaurants include Applebee’s, Longhorn, and Provino’s. Today he’s most grateful for above average health.

Football tops the list of Karl’s favorite sports, but check out his hobbies: Motorcycling, off-roading, flipping houses, restoring old farm and construction equipment, and antique motorcycles. Karl’s adventurous side has raced motocross, completed a mile swim, and jumped out of a ‘perfectly good airplane’. Karl is our own James Bond! He learned to play Chess at age five and in high school he was school and regional champion! Oh, and he learned Morse Code at the age of seven and still remembers it! The name’s Fletcher. Karl Fletcher.

I asked Karl if he could go back in time, what year would he travel to and why? “1960. I would like to meet Ronald Reagan, John F. Kennedy, Dwight D. Eisenhower, and my mother’s father” he replied.

One of Karl’s favorite teachers in school was Mr. Cannon, 5th grade math. “He saw me carrying a chess set, asked to play. We met in the cafeteria, he took his Queen and Rooks off the board to make it “fair”. He resigned after about 5 minutes, smiled and said, “I won’t do that again”.”

Thank you, Karl, for your dedication and commitment to CECS and our students. You’ve made a difference in the past 32 years and continue to do so each day.