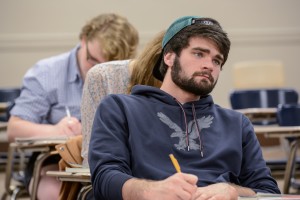 Nicholas True, a senior Brock Scholar from Cleveland, Tennessee, has won the National Top Scholar Award from the American Council of Engineering Companies worth $10,000. This award is selected on the basis of academic performance, leadership, initiative, work experience in the field and understanding of the engineer’s role in various scenarios.   Nick was previously selected as one of two winners at the state level, which qualified him for the national competition.  Nick will travel to the ACEC’s October conference in Hawaii to receive his award.

Nick’s impressive resume of work and community service was an essential part of his success in winning the scholarship.  In spring 2013, Nick worked as a student assistant at the UTC SIM Center and since June 2013 he has worked with the Hydro Power Generation Group at a Chattanooga engineering firm.  He has served on the UTC Brock Scholars Council, representing UTC at the National Collegiate Honors Council Conference in 2011 and 2012.  In spring 2013, he represented UTC at the Gulf South Summit for Service Learning.  He is a member of the Amercan Society of Mechanical Engineers, the American Society of Heating, Refrigeration , and Air-Conditioning Engineers, and the Society of Automotive Engineers (SAE), serving as treasurer for UTC’s SAE club in 2012-13.

Nick will continue his academic achievements in engineering with a senior thesis project during the 2014-15 investigating the accuracy of new thermal imaging technology as compared to standard methods of measuring heat transfer.  Following graduation in May 2015, he plans to begin his career as a professional engineer at a company in the Chattanooga area.